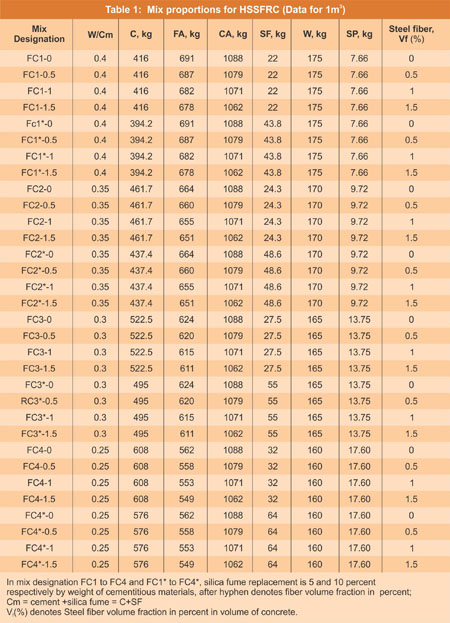 The use of fibers in concrete has gained momentum in the infrastructural and industrial applications. Studies have shown increasing evidence that brittle behavior of HSC/ HPC can be overcome by the addition of short steel fibers of small diameter in the concrete mix (Hsu and Hsu, 1994). Balaguru and Shah (1992) and ACI 544. 1R- 1996 have reported that the addition of steel fibers in concrete matrix improves all mechanical properties of concrete especially tensile strength, impact strength, and toughness and ductility. An understanding of the tensile strength properties of steel fiber reinforced concrete (SFRC) and its variation with fiber content is an important aspect of successful design. The combined use of superplasticizer, and supplementary cementing materials (SCM) such as silica fume having pozzolanic reaction and filler effect which will in turn improve the interface of the materials, thereby enhancing the strength of the concrete, can lead to economical high-performance concrete (HPC) with enhanced durability. Banja and Sengupta (2005) have observed that silica fume incorporation in concrete results in significant improvement of the tensile strength along with compressive strength.

The relationship between splitting tensile strength and fiber reinforcing index for predicting 28-day strength at any water-to-cementitious materials ratio and fiber content in terms of fiber reinforcing index is quite limited. Wafa and Ashour (1992) have developed equations for predicting the influence of fiber contents on strength properties (modulus of rupture, splitting tensile strength and compressive strength) of HSFRC with w/c = 0.25. Nataraja et al. (2001) have developed expressions for predicting 28-day tensile strength using regression analysis as a function of fiber reinforcing index (RI). In all the empirical equations only a particular w/cm ratio with varying fiber content was used. However, rather absolute strength values have been dealt with in all the models and thus are valid for a particular w/cm or w/c ratio and specimen parameter considered. Ramdadoss and Nagamani (2007) have considered non-dimensional parameter for developing mathematical model for predicting 28-day compressive strength of HPFRC with wide range of w/cm ratios.

The aim of the present investigation was to develop the expression to predict 28-day splitting tensile strengths of HSSFRC for a wide range of w/cm ratios, which may serve as the useful tool to quantify the effect of fiber addition on strength in terms of fiber reinforcing index. This paper presents an experimental investigation on the splitting tensile and compressive strength properties of HSC with w/cm ratios ranging from 0.25 to 0.4 and studies the effect of inclusion of steel fibers (fiber volume fractions, Vf = 0.5%, 1% and 1.5%) on improving these properties.

Mixtures were proportioned using guidelines and specifications given in ACI 211.4R–1993, recommended guidelines of ACI 544.3R- 1993. Mixture proportions used in the test program are summarized in Table 2. This aspect of work has been carried out elsewhere (Ramadoss and Nagamani, 2008). For each water-cementitious materials ratio, 6 fibrous concrete mixes were prepared with three fiber volume fractions, Vf= 0.5 and 1.0 % by volume of concrete (39, 78 and 117.5 kg/m3). Slump value obtained was 75 ± 25 mm for silica fume concrete mixes and VeBe value was 12 ± 3 sec for fibrous concrete mixes. 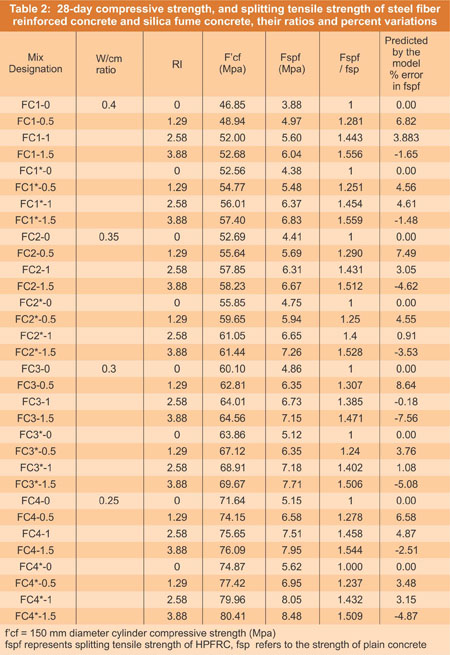 Splitting tensile strength tests were conducted according to the specification of ASTM C496-1990 using 150 x 300 mm cylindrical specimens. The tests were conducted in a 1000 kN closed loop hydraulically operated Universal testing machine. Plywood pieces (as packing material) of size 25 x 3 mm were placed on both loading and reaction faces of specimens before testing. Three samples were used for computing the average strength.

Compressive strength tests were performed according to ASTM C39-1992 standards using 150 mm diameter cylinders without capping, loaded uniaxially. Each strength value was an average of there specimens. Compressive strength ranging from 46.9 to 80.4 MPa as obtained for various hardened concrete mixes is given in Table 2.


The relation between split tensile strength and compressive strength of steel fiber reinforced concrete (SFRC) is shown in Figure 2. The empirical equation obtained for SFRC with correlation coefficient, r = 0.86 is given as:

Table 2 presents the splitting tensile strength ratios of fiber reinforced and plain concrete (silica fume concrete). Figure 3 shows splitting tensile strength ratios, (fspf / fsp) as a function of the fiber reinforcing index, RI of the concrete. These ratios can be utilized for the development of the generalized expressions, which are free from the influence of varying w/cm ratios and specimen parameters, for predicting the tensile strength. The validity of the model was investigated by examining relevant statistical coefficients (Bhattacharya, 1977).

Based on the test results, using the linear regression analysis, the splitting tensile strength ratio (fspf / fsp) of HSFRC and SF concrete may be predicted in terms of fiber reinforcing index, RI as follows:

The values of the correlation coefficient (R) and the standard error of estimate (s) have been obtained as 0.96 and ­­0.274, respectively. The percent variation in absolute has been obtained as 3.092.

Comparison of Results of Previous Researchers

Mode of Failure under Tension

As a result of the inclusion of fibers into the plain concrete matrix, the brittle mode of failure is changed into a ductile mode as fibers increase the energy absorption capacity and enhance the lateral stiffness to the section. After the occurrence of the cracks, the specimen did not fail suddenly. Instead, the crack propagates due to the bonding of the fibers into the concrete matrix and offers pulling force in the lateral direction to restrain cracking, thereby prolonging the failure state of the specimens. Figure 4 shows failure pattern of cylinder specimens under splitting tension.

Based on the experimental investigations on HSSFRC incorporating silica fume with w/cm ratios ranging from 0.25 to 0.40, the following conclusions can be drawn.