It is now well established that one of the important properties of fibre reinforced concrete is its superior resistance to cracking and crack propagation. As a result of this ability to arrest cracks, fibre composites possess increased extensibility and tensile strength, both at first crack and at ultimate, particular under flexural loading; and the fibres are able to hold the matrix together even after extensive cracking. The net result of all these is to impart to the fibre composite pronounced post – cracking ductility which is unheard of in ordinary concrete. The transformation from a brittle to a ductile type of material would increase substantially & the energy absorption characteristics of the fibre composite and its ability to withstand repeatedly applied, shock or impact loading. In this paper, the mechanical properties of triangular shape polyester fibre, and applications of FRC are discussed.

Fibre reinforced concrete (FRC) may be defined as a composite material made with Portland cement, aggregate and incorporating discrete discontinuous fibres. Why would we add such fibres to concrete? Plain, unreinforced concrete is a brittle material with a low tensile strength and a low strain capacity. The role of randomly distributed discontinuous fibres is to bridge across the cracks that develop & provide some post- cracking "ductility". If the fibres are sufficiently strong, sufficiently bonded to material, and permit the FRC to carry significant stresses over a relatively large strain capacity in the post-cracking stage.

There are of course, other ways of increasing the strength of concrete. The real contribution of the fibres is to increase the toughness of the concrete (defined as some function of the area under the load vs. deflection curve), under any type of loading. That is, the fibres tend to increase the strain at peak load, and provide a great deal of energy absorption in post-peak portion of the load vs. deflection curve [4].

When the fibre reinforcement is in the form of short discrete fibres, they act effectively as rigid inclusions in the concrete matrix. Physically, they have thus the same order of magnitude as aggregate inclusions; fibre reinforcement cannot therefore be regarded as a direct replacement of longitudinal reinforcement in reinforced and prestressed structural members. However, because of the inherent material properties of fibre concrete, the presence of fibres in the body of the concrete or the provision of a tensile skin of fibre concrete can be expected to improve the resistance of conventionally reinforced structural members to cracking, deflection and other serviceability conditions.

The fibre reinforcement may be used in the form of three – dimensionally randomly distributed fibres throughout the structural member when the added advantages of the fibre to shear resistance and crack control can be further utilised. On the other hand, the fibre concrete may also be used as a tensile skin to cover the steel reinforcement when a more efficient two – dimensional orientation of the fibres could be obtained. 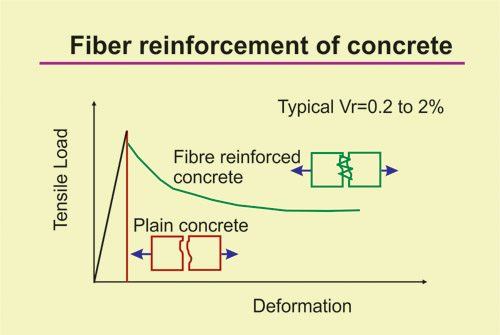 The behavior of FRC under loading can be understood from Figure 1. The plain concrete structure cracks into two pieces when the structure is subjected to the peak tensile load and cannot withstand further load or deformation. The fibre reinforced concrete structure cracks at the same peak tensile load, but does not separate and can maintain a load to very large deformations. The area under the curve shows the energy absorbed by the FRCs when subjected to tensile load. This can be termed as the post cracking response of the FRCs. The real advantage of adding fibers is when fibers bridge these cracks and undergo pullout process, such that the deformation can continue only with the further input of energy from the loading source.

Shear failure in concrete is known to be brittle and catastrophic [8]. In usual structural design, shear is accounted for by providing shear reinforcement such as stirrups in beams. Sometimes the shear reinforcement may be less than sufficient if the loading configuration were different from that predicted during design, such as during earthquake or at critical section reinforcement conjunctions. Fibres are effective shear reinforcement, its increased shear strength and ultimately results in ductile flexure failures [7].

If RC structure designed according to IS: 13290 (Code for ductile detailing), heavy reinforcement detailing will be in confinement zone of beam and column. If shear stress enhance by the addition of "Triangle Polyester Fibre" in the concrete, then stirrups spacing in structural component will be increased. Polyester fibre reinforces concrete satisfying ductility, durability and energy absorption criteria of RC structures. PFRC (Polyester Fibre Reinforced Concrete) also give high resistance to CO2, water and atmospheric gases in "cover zone" and protect reinforcement from corrosion. Polyester fibres in cover zone provide mechanism of "crack arrester" under earthquake, reversible cyclic, dynamic, and wind cyclonic load. Recently in IS: 456 in august 2007, some amendment was made for addition of "fibre" in concrete.

Shear strength of fibre reinforced concrete plays very important role in construction of P.Q.C. (Pavement Quality Concrete) for road and at present in Surat in construction of road no steel reinforcements are used only "Triangle Polyester Fibre" are added for flexural shear of road. Steel doweling bars are used only at joints of road panel in longitudinal and lateral directions. Due to triangle shape of fibres in concrete gives more damping property. Ordinary concrete gives 5% damping, while TPFRC gives 6.5% damping and ultimately reduces dynamic loading on structure [6].

In the most advanced and most recent design method, the contribution of fibre reinforcement to shear is completely ignored. Also no Indian design codes allow a reduction or removal of stirrups or dowels from beams, column and beam-column joint. Now a days, these techniques slowly entering into field, provide properties that are easily obtainable through fibre reinforcement.

FRC as a material is emerging from laboratory testing to field applications like in new construction, repair, retrofitting, etc. Structural characteristics should be understood properly for this ductile composite to be used in wide spectrum of applications. An attempt is, therefore, made in the present experimental investigation to analyses these composites, and to predict their performance in various loading conditions.

The mixture proportions and properties of concrete used in the test program are given in Table 1. 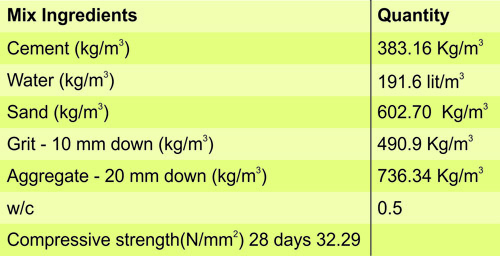 JSCE-SF6 suggested direct shear method by using beam of size (150x 150x 500 mm) and load applied through male–female arrangement and failure under double shear. Another method suggested by Dr. C.D. Modhera and Dr. N. K. Bairagi,[1] arrangement for which is shown in fig. 2.

All Dimensions are in mm.
Figure 2: Arrangement of Specimen for Shear Strength

Workability reduces at higher dosage of fibres compared to initial dosage used. Due to more addition of fibres, there is increase in amount of entrapped air voids due to presence of fibres and therefore increase in air content attributes in reducing workability and difficulty is observed in compaction of mixes.

A load resisting mechanism is better due to triangular cross section of fibres undergo twisting kind of the deformation in 3D fibre orientation than circular cross section. A sufficient bond with matrix is observed during the studies. The fibre pull-out is prevented and fibres mainly failed by breaking. Compared to normal concrete, budging effect is observed for FRC cubes. Also no balling off of concrete indicated the gain of residual strength in concrete.

Split tensile test does not give perfect estimation about direct tensile strength due to mixed stress field and fibre orientation but its failure pattern gives fairly good idea about ductility of the material. Failure patterns of splitting tensile test indicate that specimens after first cracking do not separate unlike the concrete failure. Large damage zone is produced due to closely spaced micro cracks surrounding a splitting plane. Fibre bridging action and due to that stress transfer mechanism is responsible for such enhanced ductile failure pattern.

The flexural strength of the mix with the dosage of 1.5% increases by 21%. Nominal increases remains for all dosage of fibres compared to normal mixes. Minor gain is due to influence of top compression block in specimen, as when specimen is subjected to two-point loading, half depth of uncracked portion is under compression and bottom half is under tension.

The addition of polyester fibres to the mix increased the shear strength of the mix with the dosage of 0.5% and 2% by 20% and 25% respectively. Addition of fibre reduces the crack spacing, thus indicating a more redistribution of stresses. Plain concrete failed in a very brittle manner, but FRC provided a gradual softening in shear. As the first crack forms, the fibres bridge it, transmitting stresses across the crack surface. In order to enforce further crack opening the applied load has to be increased, which leads to the formation of another crack. This mechanism then repeats until failure. 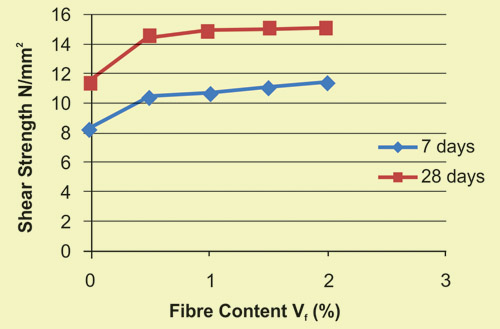