Kindly tell us about the core business profile of KDP Infrastructure. What is the current size of the company?
KDP Infrastructure is into real estate business specializing majorly in high end residential projects. Its debut project “KDP Grand Savanna” has 1158 flats of 2/3 BHK ready to move-in options. Another project “KDP Ethos” is all set to take off in a couple of months. Ethos will have 432 flats of 2/3 BHK options with ultra modern facilities.

What is the USP of a project by KDP Infrastructure?
The USP of KDP Infrastructure is ultra modern luxury apartments with maximum greenery and luxury facilities. Of the 12.5 acres of Grand Savanna, 80% is open area with beautiful landscapes in the most prominent location at Rajnagar Extn. Ghaziabad. Apart from this, the project offers a host of modern facilities matching with that of a world class living standard.

What are the important projects taken up by your company?
KDP has initially launched and completed Greater Noida Shopping Plaza. Current projects are KDP Grand Savanna & Ethose at Rajnagar Extn.

The definition of Affordable Housing varies considerably. According to you what kind of houses come under this category in Tier II and Tier III cities?
Definition of Affordable Housing varies according to the status of cities. In cosmopolitan & Tier II cities, the number of middle income groups is supposed to be larger whereas in Tier III cities, the number shrinks considerably. In II and III Tier cities, the investors look for more space and affordability. Since the land cost is comparatively low in these segments compared to metro cities, the builders focus mostly II/III BHK options at lower costs, which can fetch end users and investors.

Business Houses and developers are turning their efforts to locate themselves in Tier II and III cities. What is encouraging this trend and what are the benefits expected to these parties?
Builders have already entered into suburban areas where low cost land is available and with the multi facility concept gaining popularity, this segment is getting widened day by day. 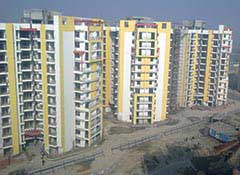 What are the challenges of project development and marketing in cities like Noida and Ghaziabad?
In Noida & Ghaziabad, customers look for mainly easy connectivity with Delhi and other important locations. As traffic is growing day by day, marketing these properties is a bigger challenge for builders. Availability of amenities like water, electricity and phone/net connectivity are areas of concerns while selecting areas for development. Steep hike of land cost is also a major concern.

What are the new areas that you are planning to expand into?
Currently, KDP is focusing on Rajnagar Extn Ghaziabad. It has ambitious growth plans for future to expand its activities in Northern part of the country.