Reports Maria R.
BAU 2013, the world’s leading trade fair for architecture, materials, and systems which is going to take place from January 14 to 19, 2013 at Messe München exhibition center, Munich, Germany– has once again broken all its record by registering over 2,000 exhibitors from more than 40 countries and approximately 240,000 visitors from all over the world much before the show. Demand for booth space at BAU has been very strong for many years and this time also the organizers have a long waiting list, said Mr. Mirko Arend, Head of project Group, BAU, Messe Munchen GmbH who was on visit to New Delhi recently for promoting the show in India.

Briefing about BAU he said that the show would sprawl over 180,000 square meters of indoor and 3,500 square meters of outdoors exhibition space and display architectural solutions, materials and systems for commercial and residential construction and for interior fit-out, for both new-build and renovation and modernization purposes. He elaborated by saying that in every two years this event brings together market leaders from the sector to participate in a unique international display of competence spanning all the construction trades. This is also the world's largest trade fair for architects and construction engineers. 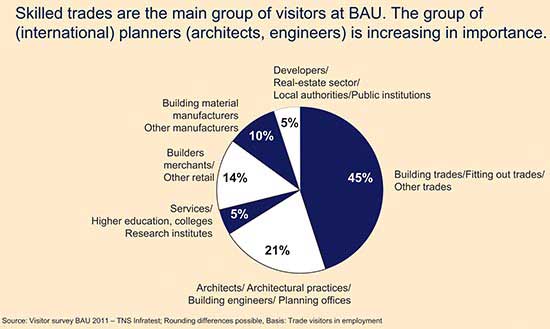 He informed that there is no other event in the world at which this visitor group is represented in such numbers and so prominently. In 2011, the event was attended by over 50,000 visitors from architecture and planning firms. In six years, we have doubled the proportion of planners among the visitors to BAU. A breakdown of the visitor structure is as below: 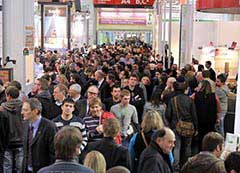 About the important participating countries he said that Germany is the No. 1 exhibiting country at BAU with already 1,224 confirmed applications being received. The countries outside Germany that are most strongly represented on the exhibitor side are traditionally Austria, Italy and Switzerland. The only non-European country that now has a firm place in the Top Ten is China. And what is most noticeable is that there are still many exhibitors from countries that are in the headlines recently because of the euro crisis like Spain, Greece and also Portugal. Overall, the proportion of international exhibitors is at 28%.

Speaking about the key themes Mr. Mirko said that the building industry recognizes the role of BAU as an innovations engine. It gears its innovations and R&D work to the event cycle of BAU which ensures that it covers the new themes that the industry is interested in. He informed that the construction engineers and project developers will explain and discuss all the key themes including Sustainability, Building for life, Energy 2.0, and Urban development in the 21st century from a variety of aspects. And at BAU, the themes will be illustrated with examples of products and projects. 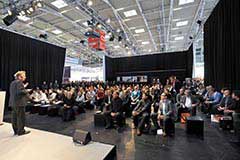 Explaining these themes, he said, sustainability has now become a generic term for contemporary, and responsible building. Products and materials fulfilling sustainability criteria will be found at the booths of exhibitors throughout the show and sustainable building and planning is also the key theme of the events in the supporting program.

For Building for life theme he stated, the notion of building to suit all generations is gaining ground in Germany and Europe. It means designing and fitting out living space in such a way that there is a room for everyone, so that every occupant has a sense of well-being and security, whether he or she is young or old, large or small. BAU 2013 will include several events focused on this theme.

Enumerating other themes he revealed, in Europe, around 40% of the energy consumed goes on heating buildings. Energy efficiency has therefore been a major theme for years. At BAU, in lectures and special shows, we will be looking at how buildings and urban districts will be supplied with energy in the future and what technological innovations are associated with this.

Talking about urban development he said that already half of us live in cities. By 2050, 75% of what will then be a global population of around 9.3 billion people will live in urban areas. That will pose major challenges with regard to infrastructure, mobility, security and energy supply. At the show, we will therefore address the question of what life will be like in the city of the future. 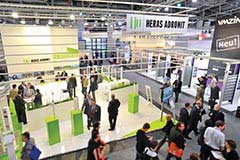 Besides these, special and high-caliber forum such as ‘Urban Intelligence: Tomorrow Town ‘Intelligent Building for the Future of the City;’ Universal Design: Particular challenges for building components; Building for life: Cost-effective, flexible and convenient; Sustainable building products: Four components for improved transparency in decision-making etc are also being organized by BAU closely with its highly regarded partners and experts from all over the world.

In addition to these, the organizer has started world's biggest competition for the architects of tomorrow in search for energy-saving projects and concepts for the future. The best 12 entrants will be selected to do internships in the practices of star architects from around the world.

On new innovation and orientation system for this year, he stated that traditionally the space at BAU has been divided into categories according to product or material type, but for BAU 2013, this established system of organization is being overlaid with an additional orientation system. Now the exhibitors at BAU can be found under a specific theme heading. Aluminum and ceramic systems, for example, come under the theme of “facades,” suppliers of chemical building products are a part of the theme of “floor coverings.” These overarching themes will help our visitors to find their way around the very extensive range on display at the fair. They can see at a glance from the symbols in which halls products are displayed that are used primarily on facades, for example. The exhibits at the fair are organized according to building material and also product and theme areas.

On promoting BAU in India, he said that India is a potential market for these products and services due to its focus on infrastructure development and green construction. Hence, we are pitching high to promote BAU message in the country so that industries in India can find many new developments in architecture, materials systems, green building products, and materials options. 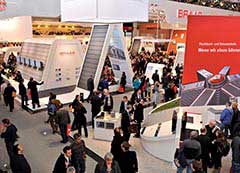 He further said that India is a big market with deep interest to avail the emerging opportunities, so we are sure to see big visitorship from the country in future with the association of organizations like BAI.

On being asked for organizing BUA like event in India he said that they have vision to organize this type of exhibition which is focused on sustainable architecture and building material as the green building construction market is very huge in the country and we see good prospect.

In his concluding remarks, Mr. Arend said that there are many reasons why one should attend this exhibition as for example here one can find unique presence of market leaders and brands, and all the key trades, products, materials – in one location. Besides, one can find innovations from manufacturers on a two-year cycle at BAU along with the Future of Building in forums and special shows, Dialog among all those involved in designing, building and planning as it’s world’s largest trade fair for architects and engineers. Last but not the least because of magnet Munich also as it is a world-class city with a warm welcome.