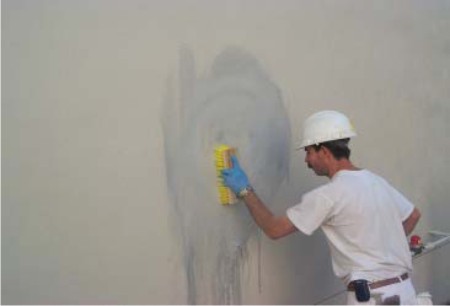 There are three main sources of water leakage in concrete structures:

Large structures of concrete are cast in number of sections. The dividing lines between two sections are the joints between already harden concrete and freshly poured concrete, with continuity of reinforcements. At these joints fresh concrete shrinks and creates a fine crack. These cracks are normally 0.1 – 0. 3 mm in width and are passages for water to pass through the structure. 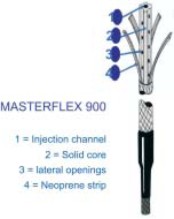 Due to various reasons such as excessive segregation of concrete mix, high water cement ratios, movements, settlements, rapid variations in ambient temperatures, early de-stripping, etc… concrete structures develop cracks during the construction stage and these cracks are some time deeper and can easily transport water from one side to another.

Concrete has heterogeneous matrix, a mixture of binding paste and fillers. While mixing the ingredients and placement of fresh concrete, concrete entraps air and the same is attempted to remove by compaction using mechanical means. Achieving uniform compacting throughout the volume of freshly placed concrete is very difficult to achieve. In adequate compaction results in to the air voids. Theoretically, concrete requires only 23 – 25% water by weight of cement for the chemical hydration of the cement. While actual concrete in practice contains 40 – 50% of water by the weight of cement. The extra water is provided to achieve desired workability and easy of placement. This extra water leaves the concrete mass during the hydration reaction resulting in to the formation of pores. An interconnected series of such pores are popularly known as capillary pores. These capillaries make concrete porous. Besides these two features concrete also contains hydration pores which are formed due to volume changes of hydration products and are normally filled with loose lime, one of end product of the hydration reaction. These hydration pores promotes diffusion of corrosive agents in the concrete. 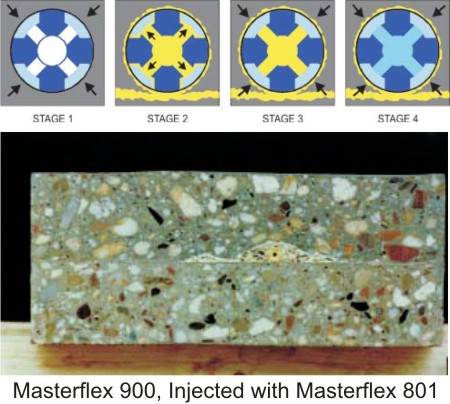 To check the porosity of concrete and leakages through the joints & cracks, integral watertight concept is gaining popularity. The concept is a combination of two systems:

The re-injectable hoses are made up of PVC plastic core which enables toughness to the hose. The core has injection channel in the centre, which connects to openings at regular distance in all four directions. The openings are guarded with neoprene seals. 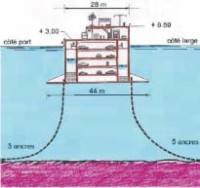 The hose is placed at the central line of the construction joints using clips and the ends are connected to nonperforated hose with termination in near-surface mounted junction boxes. After the casting and destripping of the concrete cover of the junction box is located and marked for future operations. Each length of the hose is first injected with water to assess the leakages at the construction joint. Then injected using water–based lowviscosity, re-swellable, vinylacrylate injection resin. The injection resin pressurized the soft neoprene seals and squeeze out around seals to the openings and travels around the hose and to the crack of the construction joints and other cracks which connects to the construction joints. In the next stage of operation, injection pressure is release and the hose is applied with the vacuum. The neoprene seals now gains original size and seals the openings and prevents the suction of resin from outside of the hose to inside. Also all the resin from the central channel is sucked out and then the hose is rinse using water under low pressure re-circulation stage. Now the resin in the cracks has set and forms an effective seal for passage of water in the future. The hose can be injected with water to verify the effectiveness of the injection. If leakages are noticed then the hose is re-injected with the resin once again. Overall the re-swellable acrylate resin and injection hose provides following main benefits:

To obtain proper, robust self– compacting concrete, it is important to include all of following components in the mix. These components enhance the performance of the fresh concrete as mentioned below:

Hence, to achieve a robust mix of self–compacting concrete, it is must that all of these three ingredients are present and are properly included to maximize the benefits they can offer on the hardened properties of the mix.

From the water tightness and durability aspects—these three ingredients enable the following benefits:

Overall by carefully implementing a proper self– compacting mix, achieving watertight concrete mass is possible. Also in the case of large projects, developed mix can be tested for permeability to standards such as DIN 1048 and that can be one of the acceptance criteria. While in the case of smaller projects such special self– compacting mix can be supplied by Ready mix producers who can design and control the ingredients.

Following case history of Hercules Harbor in Monaco enables us an insight in one of such successful implementation of this integral watertight concrete concept.

New studies were made in the 1980‘s to protect and extend the existing harbor. The depth of the sea–bed of 55 meters did not allow conventional construction. Further the Government decided to minimise the impact for the environment during construction. Based upon studies made in France and Norway the Monaco Government decided to build a prefabricated “ semi floating seawal l” a technique common in the offshore oil industry. 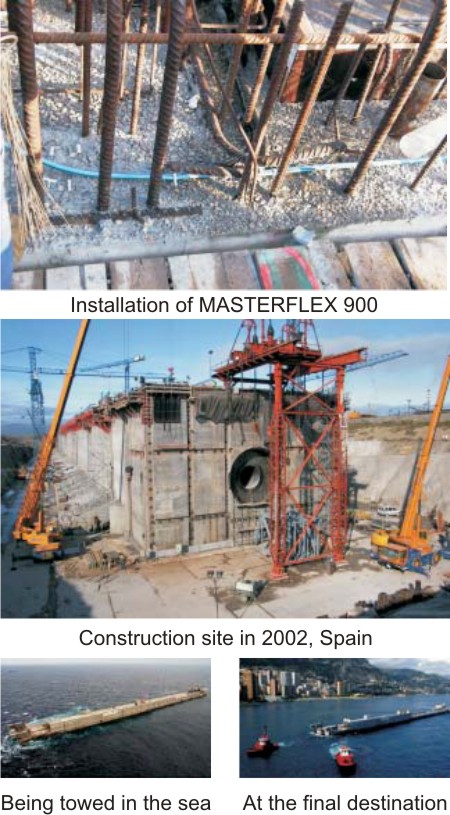 Any leakage at joint or within the concrete mass would make it sunk below the ocean.

Based upon the construction of TROLLE, an off shore platform built in Norway, DORIS Engineering recommended the use of Self–compacting Concrete. To secure the construction joints, Masterflex 900, the re-injectable hose was specified allowing testing joints and injecting and re-injecting with resin where necessary.

After the construction all the joints were injected using Masterflex 801, water based reswelling resin and tested for watertightness.

No form of external waterproofing treatment was carried out for this structure. No membrane or no accidental drill and grouting were implemented.

Finally, the structure was towed in the sea as it can be carried on the ship and was positioned at the final location in 2004.

The new age technologies and quest of civil engineers have lead to solutions which are long lasting. Such implementations make these technologies time tested and real for the rest of the world to get inspired and to implement.