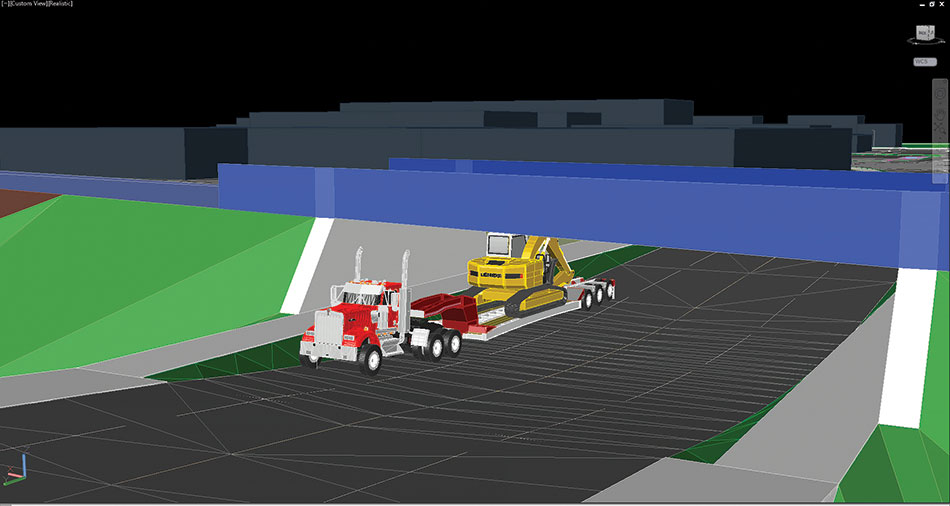 Whether it's moving across town or across the country, there are always boxes to pack and trucks to fill. But what if the core of your business IS trucks and you didn't have a choice about moving? That's exactly what happened to Portland's J+D Refrigeration.

With the new Milwaukie Light Rail Project scheduled for completion in Oregon's biggest city, some businesses had to move to new locations across the city. J+D Refrigeration was one of the businesses forced to find a new location as their old location was appropriated to make way for part of the tracks and surrounding infrastructure.

They found a location they liked in Clackamas County, but before they could move in, they had to know whether their fleet of refrigerated trucks could maneuver around the site. They called on VLMK Consulting Engineers in Portland to help them with the transition.

"We got involved pretty early on when they realized that they were going to be 'dislocated'," says Brian Dubal, one of the senior engineers at VLMK. "The local authorities told them they would have to move as Portland was building their new light rail transit system right through their existing site."

"There were some other developer firms involved and we sold ourselves pretty well that we could do the job. Once we got into the design, we realized we needed to check out some of the clients' concerns and that's when we got AutoTURN Pro." AutoTURN was first developed in 1991 and set the standard for CAD software of its kind. Now clients like VLMK Consulting Engineers have adopted AutoTURN Pro, companies across the engineering spectrum are harnessing the computational power of designing in a 3D environment. With the advanced design capabilities of AutoTURN Pro, vehicle simulations are now linked directly to the CAD geometry, including Civil 3D alignments. Vehicle path simulations were automatically updated based on any changes made to a site design.

J+D Refrigeration moved into their new warehouse facility with approximately 150,000 square feet with 13 loading dock doors and a weigh scale on the premises. Prior to moving in, one of their main concerns was the site grading around the weigh scale. With WB-67 semi-trailer trucks coming and going throughout the day, it was up to Brian and his team to ensure safe operations.

"They were really more worried about the trucks tipping and being at a weird angle," says Dubal. "It was also about offsetting the weigh scale. They were worried about having that kind of issue in approaching the truck scale."

"We ended up having to do some grade changes in the area mid-design, so some of the grades, while not steep, would have been better if they were flat. It was good to be able to show them that it wasn't a problem. They are pleased with that," he continued. 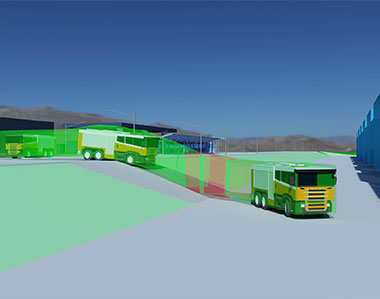 One feature of AutoTURN Pro that Dubal liked was the custom vehicle creation within the extensive vehicle libraries. While there is already a WB-67 included in the library, he wanted to add some specifications that VLMK had done previously.

"We've actually measured a truck turning with the wheels forward and the stock template (in the AutoTURN Pro library) shows it with the wheels back," says Dubal. "We modified the standard template because in Portland a lot of the WB-67 trucks move their back trailer wheels forward, which gives them a bit more maneuverability," says Dubal. "It was pretty cool to be able to modify that to match the custom template we came up with a number of years ago."

When it comes to client satisfaction, VLMK decided to follow the adage 'Show, Don't Tell.' With this in mind, Dubal used the simulation playback feature within AutoTURN Pro to animate the section of the site he wanted his clients at J+D Refrigeration to see. Being able to see their proposed site in 3D made all the difference. He described his process.

"I started a program that recorded one of my monitors and then ran the 3D animation (within AutoTURN Pro). When the animation finished, I stopped recording. We edited the video and sent it to client to see it. That was really effective," says Dubal. "As soon as the client saw it, they said 'Oh, we don't have any problems.' Looking at plans, most people have a tough time visualizing what something is going to look like. Being able to say 'what is the real impact?' and getting the right answer is key."

"I like that part of it a lot," Dubal says. "I've been using the 2D aspect of the software a lot and it's great to be able to put the whole design in 3D. I completed the J+D Refrigeration project all in 3D and put it right on the finished surface. A lot of times, it's good when you are laying out the site to use the 2D capabilities and once we get our design done in 3D, we make that a 3D model which is really helpful."

He continues, "I've been learning how to use the curb as the alignment and offset the vehicle from that. I really appreciate the aspects that make it faster and easier to use. It didn't take me very long to learn how to use the software. And the tutorials are helpful."

At the heart of AutoTURN is the vehicle swept path technology and the J+D Refrigeration site was a good candidate for analyzing different types of vehicles.

"The parking lot is separated from the loading bay area-they do have to pull onto the same main drive aisle," says Dubal. "It's helpful to look at the turn radius and see if there is a car coming out and a truck at the same time, is there enough room? The 2D turning simulation only tells you so much and with the 3D version you can see immediately 'Heck no!' and immediately change the design."

The construction ERP Hit-Office is one such software product that has been widely accepted by professionals in India and abroad. Developed after in-depth study of the processes, the HIT-OFFICE ERP

DGPS stands for Dual frequency Global positioning system. This Instrument was basically designed for finding the actual ground positions in terms of Latitude and longitude. In earlier times when

City development is a crucial factor for any country's growth. In a developing country, municipal corporations/urban local bodies and other development enterprises face several challenges like rapid

Software such as RebarCAD from CADS India can help Real-estate / Property Developers achieve significant material and time savings on their projects, which in turn can help ensure that developments