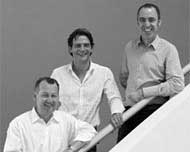 From left to right, Partners Stefan Behnisch, Martin Haas and David Cook.
Stefan Behnisch, Hon. FAIA, born 1957 in Stuttgart, studied philosophy, economics and architecture. He worked in his father's practice Behnisch Architekten before founding his own practice in 1989. Stefan Behnisch has been an advocate of sustainable design since he started working as an architect. He has held various teaching positions and is currently Visiting Professor at the École Polytechnique Fédérale de Lausanne (EPLF), Switzerland. In 2007 he received a Global Award for Sustainable Architecture, and in 2009 a Good Design Award in the category "People" presented by the Chicago Athenaeum and the European Centre for Architecture Art Design and Urban Studies.

David Cook
David Cook, Dipl. Arch (Dist.), B.A. (Hons.), ARB, RIBA, born in Manchester, UK, studied architecture in Manchester and London. He worked with Koski Solomon Ruthven in London before joining Behnisch Architekten in 1993. In 2006 he became a partner in Behnisch Architekten where he has since been responsible for spa baths, sports facilities, residential and university buildings in Germany and abroad, as well as for a concert hall in Latvia. David Cook is a frequent lecturer at universities, conferences and symposia in all parts of the world and recently served as the Belluschi Visiting Professor of Architecture at the University of Oregon. He was a joint author of the firm's joint touring exhibition with Transsolar, "Ecology.Design.Synergy", which has, until now, been staged in Europe, the USA, Mexico, Australia, New Zealand and many other countries.

Martin Haas
Martin Haas, Dipl.-Ing. Arch., BDA, born 1967, studied architecture in Stuttgart and London, and joined the Behnisch practice in 1995. In 2006 he became a partner in Behnisch Architekten and has since then been responsible for projects in Germany, Italy and France; among them the Unilever headquarter building and the residential Marco Polo Tower in Hamburg's HafenCity. Together with an international team, Martin Haas developed the competition entry for the urban rejuvenation project "RiverParc" in Pittsburgh, PA, which won first prize in 2006. As an advocate of sustainable architecture, Martin Haas was a founding member of the "German Sustainable Building Council" and has been elected as a board member in 2007. Martin Haas is a frequent lecturer at university workshops, conferences and symposia all over the world, and also a guest professor at the University of Pennsylvania in Philadelphia. 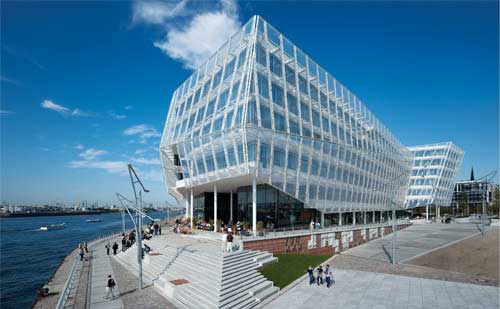 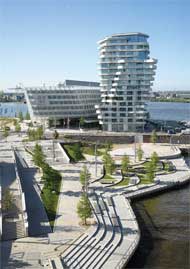 Unilever Headquarters and Marco Polo Tower, Hamburg (Photographer: Roland Halbe)
The Stuttgart-based practice Behnisch Architekten, founded in 1989 under the leadership of Stefan Behnisch is an internationally renowned architectural practice offering a comprehensive range of architectural design and planning services. Originally established as a branch office of Günter Behnisch's practice Behnisch & Partner, which existed from 1952 to 2008, it became independent in 1991 and has subsequently developed into an international practice with offices in Stuttgart, Munich, Los Angeles/California, and Boston/Massachusetts.

Since the foundation of the firm, the social dimension of architecture has been a fundamental aspect of its design philosophy. The search for innovative and sustainable design solutions making optimum use of natural resources has produced a variety of buildings, each of which responds to specific user requirements and site conditions. Behnisch Architekten's work is widely acclaimed for its innovative sustainable solutions and high architectural quality, and most of the firm's projects received international awards. 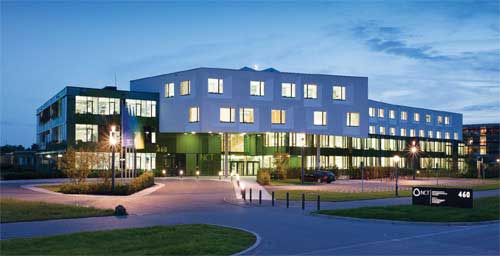 According to the practice, we, as architects, are driven by the belief that our surroundings directly influence the quality of our lives, whether in the work place, at home or in the public spaces in between. This emphasis on the social dimension is fundamental to our design philosophy, which takes as its starting point the acknowledgement that architecture is generated by the needs of people, needs that may be spiritual as well as being material. 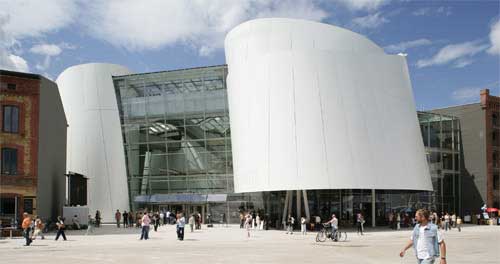 Not only buildings but the quality of the urban environment affects our well-being. This concern for the physical context has produced a diverse portfolio of projects which are united by their sensitivity to the culture and climate of place, and by their desire to bring a new quality of life to their users and the context they inhabit. 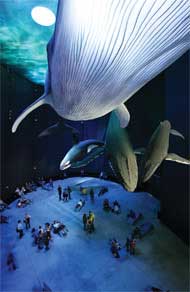 Ozeaneum Stralsund, (Phtographer: Johannes Maria Schlorke)
Each of our projects is the outcome of a demanding series of selection processes and follows important social or political developments. It is an “Iterative Process” rather than linear. We work to no preordained formula, and deliberately do not repeat old projects in new contexts, but instead respond uniquely to the specific demands of project and place. The result is often a building or structure which becomes over time a familiar and symbolic landmark - emblematic of the place and respecting the 'genus loci'. Such projects herald a degree of innovation - sometimes social, sometimes technological and are particularly successful when they occur together.

We follow a design process that involves the clients in the development of architecture. In our projects, we work closely with the representatives of the client body and respective user groups. We present the development of the design on a regular basis not only to the clients but also to the future users of the building. We believe that this process improves and enriches the design whilst importantly preparing the future occupiers for their new home. 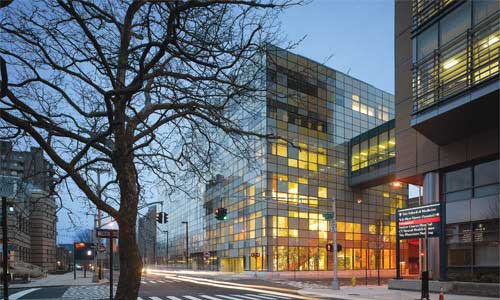 As architects we are asked to resolve an ever-increasing number of concerns and/or aspects, which are required to be taken into account in the development and realization of an idea. As the number of consultants increases, be they from the traditional planning disciplines or not, the role of the architect becomes ever more demanding. Representatives from these disciplines are often self-proclaimed specialists, often unwillingly pursuing their own interests at the expense of others. We consider it our responsibility as leaders of the Design Team to ensure that all parties involved in the potentially complex task of building are duly heard and given the opportunity to contribute, also ensuring that social and human aspects are paid due consideration important projects. 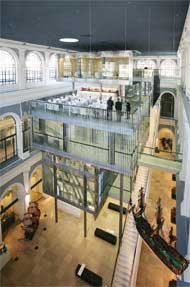 “Haus im Haus” in the Chamber of Commerce, Hamburg (Photographer Hans-Jürgen Landes)
The firm is currently working on several projects both in Germany and abroad: the UB Law School for the University of Baltimore, a new building for Amherst College, five research buildings near Paris, France, the WIPO headquarter building and a conference centre for the WIPO (World Intellectual Property Organisation) in Geneva, a concert hall in Latvian Ventspils, as well as several residential projects in Germany, Italy and the US ranging from social housing to upmarket apartment buildings.

Among the projects realised in the past are the Institute for Forestry and Nature Research in Wageningen, the Netherlands (1998), a EU pilot project for ecological construction; the Norddeutsche Landesbank in Hannover (2002); the LEED Platinum-rated Genzyme Center in Cambridge, MA; the Terrence Donnelly Centre for Cellular and Biomolecular Research for the University of Toronto (together with architectsAlliance, 2005); The 'Haus im Haus' for the Chamber of Commerce, Hamburg, Germany; the Thermal Spas in Bad Aibling, Germany, and in Bad Kleinkirchheim, Austria – the latter three all completed in 2007. The oceanographic museum “OZEANEUM” in the Unesco heritage port of Stralsund, Germany, opened in July 2008, the Unilever Germany Headquarter Building in Hamburg's HafenCity in September 2009, followed by the residential Marco Polo Tower on the same site in 2010. In 2009, Behnisch Architekten finalized the planning for Harvard's Allston Science Complex in Boston, and in the fall of 2010 the National Centre for Tumour Diseases (NCT) in Heidelberg was handed over to the client.