Elematic introduces an all-new flagship model 'the Extruder E9' to their Extruder family for hollow-core slab production. The new machine will offer high casting speed, 2nd generation automatic compaction control and sophisticated bouncing prevention. In addition to the standard hollow core slab production, the new design of the machine will also enable casting of a variety of precast slabs. 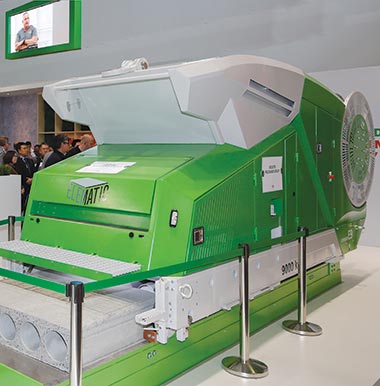 Faster casting, higher ROI: In today's construction market, fast casting is desired because of the demands of tight project scheduling. With the industry's highest casting speed of up to 2.7 meters per minute – 30% to 70% faster than its predecessors – the new Extruder E9 responds to the requirements for fast slab production. "The high casting speed of our new Extruder translates into 8 to 10 casted beds in the same amount of time that previously produced only 6 casted beds. This means even as many as 18 casted beds per day which of course brings extremely high return on investment and naturally very profitable business for the precast producer," says Jani Eilola, Product Director Floor Technologies at Elematic.

The remarkable speed is achieved with a new design of the extruding screws, optimized casting parameters and independent screw drives. Similar to its predecessors, Extruder E9 is based on shear compaction technology. Efficient compaction allows for minimum cement content in slabs, because the high density of concrete has an exponential effect on the slab strength.

Multi-product casting made easy: Independent screw driving not only increases casting speed but also enhances the versatility of the product range for Extruder E9. "For years there has been a growing demand for casting different products fast with one machine and the new Extruder is designed to do just that. A common example is casting narrow or split slabs. With the new Extruder, it is possible to choose from six different widths on a basic 1.2-meter-wide bed. It brings considerable savings when narrow filler slabs can be casted instead of sawing them to correct measurements," says Jani Eilola. The product range also covers solid slabs, wing slabs, piles and poles, and stadium slabs.

Increased Slab quality: The Extruder features a 2nd generation automatic compaction control system with the resistance of levelling beam as a new additional input parameter. Together with the independent use of the casting screws it guarantees a balanced casting process as concrete is fed more evenly throughout the whole slab cross section. The casting process is monitored and controlled better which leads to further increased slab quality.

The machine also features an intelligent bouncing prevention system for stopping the pressure fluctuation during compaction from causing waves to the slab surface, such that the surface will remain smooth and even. A slow speed casting mode in the Extruder reduces the need to stop casting when concrete supply to the machine is restricted; less stops means better slab quality.

Modern user experience: Extruder E9 has a modern, intuitive and graphically pleasing 15.6" touch screen user interface. The touch screen is easy to use; you can zoom and drag and drop items similar to any other smart device. The user interface is designed to meet the everyday casting tasks in precast concrete plants. The operator can, for example, change casting modes directly on the machine.

Recycling concrete automatically: Extruder E9 comes with an option for a smart, environmentally-friendly recycling system. The system significantly decreases concrete consumption and lowers production costs. Once the recycled concrete is transported back into the Extruder, the system slowly mixes it with the fresh concrete to ensure that the mix quality remains on the defined high level.

Extruder E9 forms an efficient working couple with another new machine from Elematic, the Modifier E9, for digging and placing cuttings, recessions and other openings. Together they are a perfect match increasing efficiency and sustainability of hollow-core slab production.