“As of now we are focused on increasing our export business and Africa is one of the targeted markets. It is the time for some homework particularly on the cost front. We revisited all the cost centres & cut the avoidables. A mass customer contact programme called “Sampark” was run for 30 days to reach out to all our existing customers for free health check up of their machines. It has given us more than what was expected from it and also helped us to work out the way forward on after sales support,” says Mr. Rajinder Raina, General Manager, ECEL, in an interview with S. A. Faridi.

What would be your business agenda to dispel present pessimism set in and around ECEL business?
When things are not too bright outside, it is the time for some homework particularly on the cost front. Industry has seen brilliant growth in the past decade & half and I am sure the current phase will pass.

Escorts probably is one of the few Indian companies who has developed its products indigenously. What has been the driving force to maintain an indigenous identity when most of the Indian companies have at one stage Joint Venture with multinational companies? 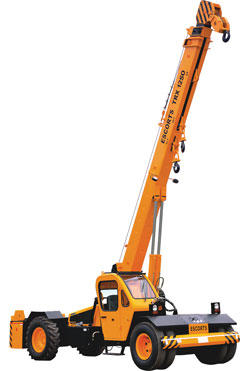 Ecsorts Construction started off with pick–n–carry cranes developed indigenously keeping Indian market in mind. Built up an engineering development/design team that responded to the voices captured from the application/work sites. Instead of pushing products into the market place, the objective was to provide solutions. Technology had to be in keeping with the evolution of the local market. We are not averse to technical collaborations that help us absorb modern product technologies & manufacturing practices. The indigenous identity has helped us move the market to the next higher level of technology that caters to the new project requirements. This very strength resulted in Escorts giving the first totally indigenously developed Backhoe Loader ‘DIGMAX’ to the Indian market that ranks at the top of technology, performance & reliability.

Present spell of slowdown is a big challenge but it is also an opportunity to introspect and fine tune your operations. What has been the company’s current focus on expansion and strengthening of its products support and market reach?
The slowdown is certainly a challenge. We revisited all the cost centres & cut the avoidables. A mass customer contact programme called “Sampark” was run for 30 days to reach out to all our existing customers for free health check up of their machines. It has given us more than what was expected from it as also helped us to work out the way forward on after sales support.

How has this fall of Rupee impacted Escorts business operation? What enabling steps you are taking to minimize the impact? Don’t you think export to SAARC and developing countries, can be an option?
The sharp & unexpected erosion has impacted our manufactured products wherein imported aggregates are used & the traded equipment business has been hurt. Whereas the increase has to be passed on through price hike increased focus on exports is needed. Besides SAARC countries, Middle East & African countries are on our radar.Export benefits help in more than one ways.

As one of the captains of the industry, don’t you think that instead of worrying too much on the fall of rupee, CAD, external borrowings which no doubt are a matter of concern, the industry and the government should concentrate on improving manufacturing, rejuvenating supply and demand to offset these impacts which are more driven by speculations?
In the past decade, given the boom & the outlook of the industry, most of the companies ramped up their production capacities & attendant investments were made as also, new players entered into the Indian market. This was natural. However, the negative growth in the last 18 months impacted everybody and the impact was sizeable, between 30 and 35%, computed Y-o-Y. Govt has to chip in because it is the biggest spender in India. This will enthuse foreign players to regain their confidence & invest in India. These concerns have been raised with govt at various forums. It is hoped that the industry will look up from here on.

In materials handling business certification of equipment like definition of performance, safety and operation is a big issue as there is no specific/unified guideline, and everyone interprets it as per his/her own preferences and understanding. Hence there are lots of confusions among end users. What are your suggestions on the same?
The answer is yes and no. For anything to get a standard shape, there has to be a necessity for it & the rest will follow. Safety is becoming a feature of necessity & premium. It has become a qualifying criteria in majority of the cases & this entails safety of men and materials. Measurement of performance does have a definition in the form of guaranteed percentage performance, measured on uptime basis. Measurements of production per hour & fuel consumption are still more of a product differentiator. As the sales narratives change, international practices come into play, standards shall be available for the end users in a definitive form. However, even globally, different sets of standards are followed & not one/uniform global norm.

Waking up from its policy paralysis phase, the government has cleared/announced a number of new infrastructure projects and took necessary steps to fast track their implementation as well. How do you link it with the revival of the CE industry in spite of the Parliamentary election due early next year?
Our industry has a direct correlation with infrastructure projects getting started. The shorter the time allocated for completion, more mechanistion is needed & thereby increase in demand. If sufficient number of works get awarded, there will be an increase in demand. There is a little movement but what is needed is awarding of major work packages. Elections generally tend to result in slowdown in our industry.

Entry of many big brands in the backhoe business in the last 2-3 years coupled with negative growth has put a question mark on market potential. Where do you see the market in the next two three years and increasing Escorts market share?
Backhoe industry being the biggest one in India is bound to attract players. It can’t be wished away. Escorts Digmax has been able to create sufficient visibility across the country. The latest version DIGMAX II has all the features to rake in 7 percent and 10% of market share during the next two years. We have a product in hand, strategy in place & requisite infrastructure to provide the after sales support. As for the market size the market is expected’ to touch a double digit growth next year & improve further there from.

There was a plan at ECEL end to set up CE manufacturing facilities in African countries. Is there any development taken place in this regard to report?
As of now we are focused on increasing our export business & Africa is one of the target markets. Manufacturing facility is not on the cards at this point of time.