Time after time, precast concrete has been proven the material of choice when replacing our nation's roadways. Offering strength, durability, fast installation times and a controlled manufacturing environment, precast was the material of choice when the California Department of Transportation (Caltrans), undertook one of the largest pavement and slab replacement projects in the nation. 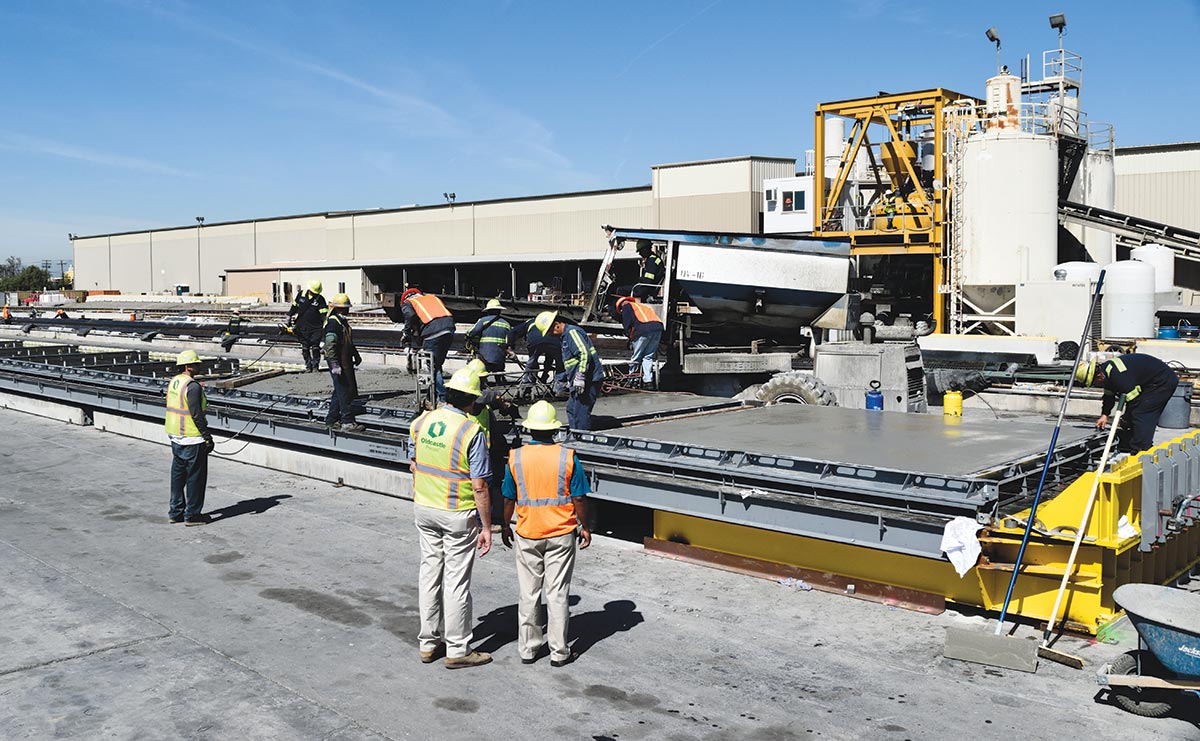 Situated just north of Los Angeles, the $148 million Foothill Freeway (Interstate 210) project kicked off in April 2015 and encompasses about 10 miles of freeway. Kirsten Stahl, P.E., acting chief for the Caltrans Office of Engineering Services, said her department was responsible for scoping the work, funding the project and awarding the bid.

Built in the late 1960s, the Foothill Freeway had exceeded its design life, according to Stahl, and over the last few years had become a popular route for commuters and truck drivers.

"A lot of vehicles trying to bypass the downtown LA area use 210 as a bypass," she said. "As a result, it's really gotten beat up."

That's likely because the road wasn't built to withstand the high volume of traffic that relies on the bypass. Over the course of time, it fell into disrepair.

"In some places, the pavement was completely shattered," Stahl said.

Precast at the maintenance level

Having withstood roughly five decades of use, the Foothill Freeway is now getting a new lease on life, and the commuters who rely on it suffered minimal delays or detours thanks to a well-orchestrated installation process. Stahl credits a "progressive maintenance superintendent" from Caltrans with pioneering the use of precast concrete for such a project.

"We were lucky," she said. "He wanted to use something that he felt would be more effective, so he started with individual precast slabs to replace existing pavement." 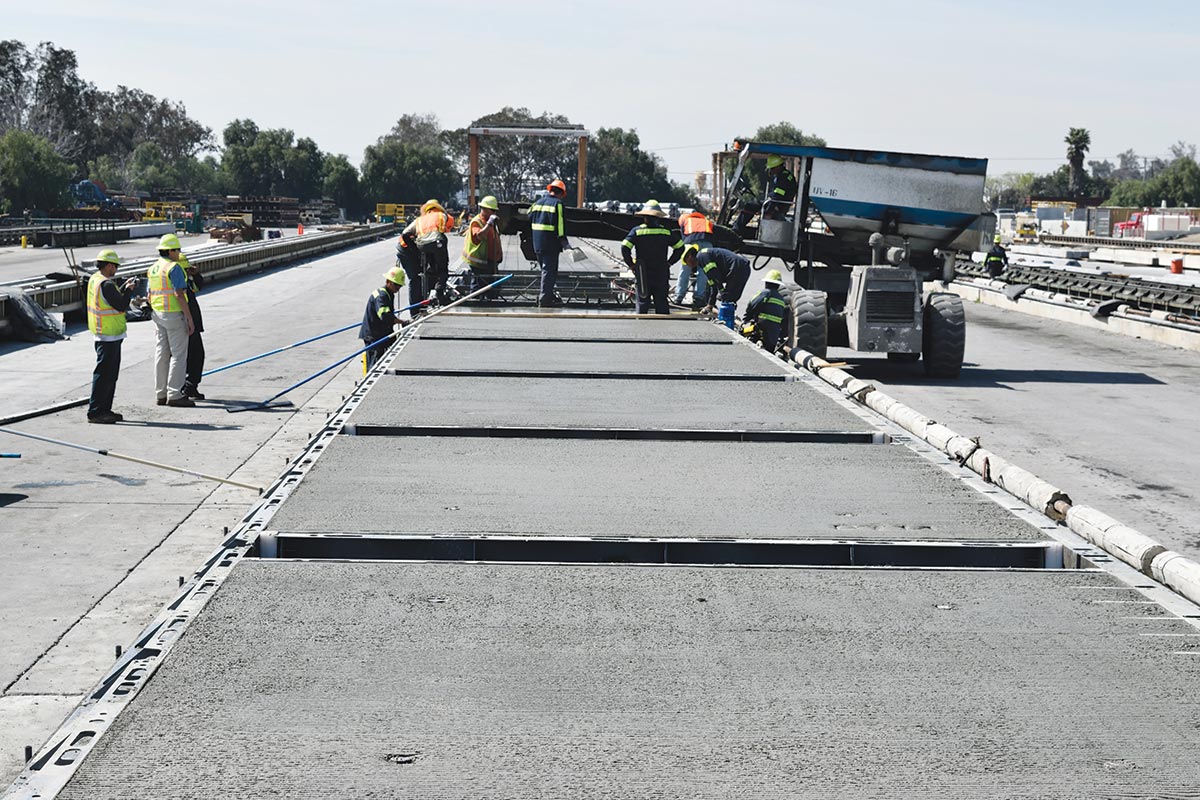 And with that, Caltrans made its first foray into using precast pavement at the maintenance level. After several projects were successful, Stahl said the superintendent expanded his vision to include other Caltrans projects – one of them being the Foothill Freeway.

The contractor that won the project bid, Flatiron West Inc., was familiar with the use of precast for highway construction and replacements. Stahl explained that the company knew to place the base very accurately and to the correct depth, and then place the panels "like tiles sitting atop the treated base." This attention to detail minimized the amount of grouting that had to be performed after the fact.

"They were able to get the panels together nice and tight, which is what we look for so that we don't encounter joint problems at a later date," Stahl said.

Manufactured by Oldcastle Precast, the panels for the I-210 replacement were produced over an 11-month span at a rate of 30 panels per day. In total, the precaster manufactured 6,500 precast concrete pavement slabs, each of which measured 12.5 feet wide by 11.33 feet long by 12 inches thick.

Oldcastle, which was awarded the project via public bid, worked with Flatiron West's engineers to come up with proposed modifications before moving forward with the project. 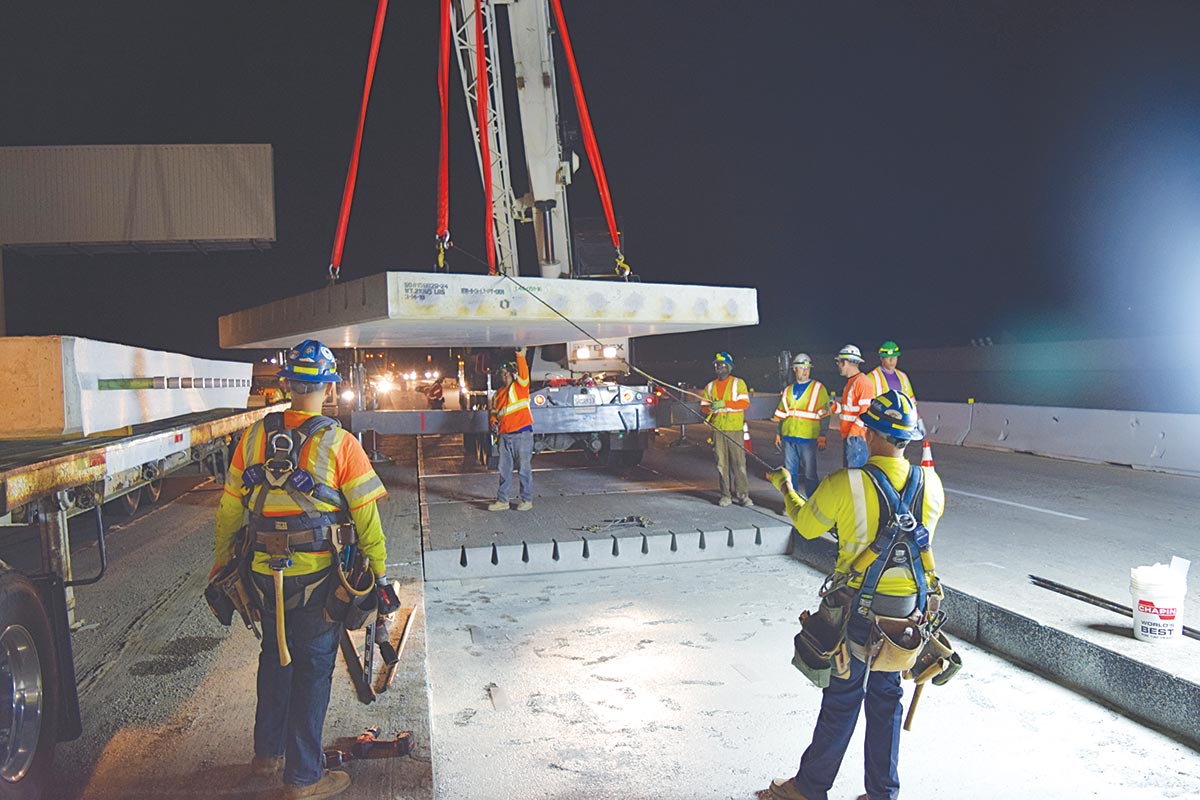 "We found a few ways to improve the processes of installing and connecting the panels," explained Phil Felton, Oldcastle's vice president of sales. "Those changes were incorporated into the design, approved by Caltrans, and then ultimately used both for the manufacture and installation of the panels."

Felton said that early coordination among the precaster, contractor and project owner helped ensure a smooth process for the major highway replacement.

"The job went well in large part due to this collaboration," he said. "We all worked together to come up with design- and project-specific solutions."

To handle production, the precaster purchased a new, 500-foot self-stressing bed. Transportation was a particularly critical point due to a limited window for on-site product delivery.

"We knew that we needed a partner trucking company that could deliver the panels so that they could be installed the same night," said Felton, who estimates that Oldcastle delivered anywhere from 40-to-50 panels each night.

That schedule presented some logistical challenges for Oldcastle, because the plant is located roughly 60 miles from the highway. As a result, some of the deliveries were round trip, with drivers offloading at the job site and immediately returning to the plant for a reload and a subsequent trip back to the site.

"We had staff members standing by, ready to load the trucks back up, and full-time project managers overseeing every delivery," Felton said. "It took a lot of careful coordination to make all of this work night after night, and without any problems."

Over the last few years, precasters like Oldcastle have seen an increasing number of precast pavement slabs being specified and used to repair highway lanes and/or upgrade older lanes on U.S. roadways. Driven by benefits like reduced traffic congestion, shorter project durations and increased safety, organizations like Caltrans appreciate the fact that highway slabs install quickly, last an estimated 50 years and can be installed in any weather.

This method reduces impact to the public, and especially to commuters. On the I-210 project, for example, the overnight installation process required the highway to be closed at approximately 9 p.m. At that point, workers cut out the deteriorated sections and placed a lean concrete base into the opening. Once the concrete base reached the required strength (approximately one hour later), the precast concrete pavement slabs were installed, and the highway was reopened for full traffic by 5 a.m. the next morning.

"By using precast, we were able to get the road reopened to traffic sooner, which is a benefit to everyone," Stahl said. "It gets the contractor off the road with less exposure to the public during peak traffic. And, the public gets its roadway back sooner, with fewer traffic delays and congestion on an otherwise very busy route."

"Not only is it manufactured with high quality control standards in the plant, but you also get additional reinforcement from the prestress which, in turn, adds to the life of the concrete pavement," she said. 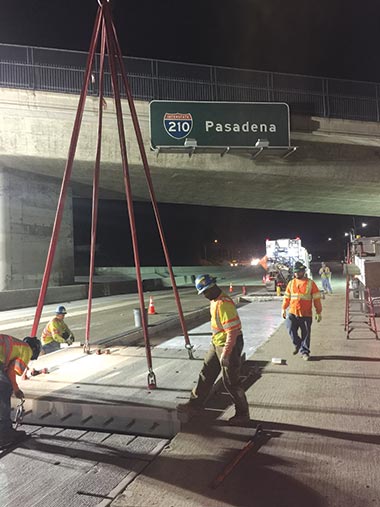 As the person who everyone calls when something goes wrong or challenges crop up on a Caltrans roadway project in her region, Stahl explained she's received very few calls related to the I-210 replacement project. That's music to her ears.

"As far as I can tell, everything has gone really well," she said. "I drive a portion of that highway myself, and I can see the progress that's being made and how much smoother and nicer the lanes are."

In retrospect, Felton said the early collaboration among the three key entities involved in the undertaking helped ensure a successful outcome.

"There was a lot of early planning and coordination," he said.

"In some cases, we were talking several times a day."

And if it's any indication of the project owner's satisfaction with the outcome, Felton said the precaster just signed a contract for another 3,000-panel roadway project on Interstate 5 near Castaic Lake in northern California.

"Obviously, the experience was positive enough that Caltrans wants to replicate it on another highway, and we signed up for it again."

Bridget McCrea is a freelance writer who covers manufacturing, industry and technology. She is a winner of the Florida Magazine Association's Gold Award for best trade-technical feature statewide.

Acknowledgement: The article has been reprinted/reproduced from National Precast Concrete Association (http://precast.org/) with its due permission.