Demag crane business, explained, Mr. Filipov, is highly complementary to the existing Terex crane business. The combined entity would have had total revenues of about $5.8 billion in 2011 with strong footprint in Europe and developing market in Asia, including China and India. Mr. Filipov also informed that Terex has entered a joint venture with one of Russia's largest companies, GAZ Group to manufacture and sell construction equipment in the continent. 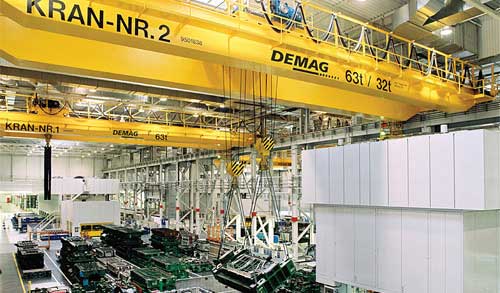 Terex Corporation with a strong workforce of 22,000 team members in more than 50 manufacturing facilities in North and South America, Europe , Asia and Australia operates in four business segments—Aerial Work Platforms and Utilities, Construction and Road building, Cranes and Materials Processing. Terex also offers a complete line of financial products and services to assist in the acquisition of equipment through its division - Terex Financial Services.

For Terex, India is one of the top strategic markets. Mr. Filipov said, Terex Corporation realizes the fact that India is one of the top infrastructure growth stories across the world and is poised for continuous growth. Terex has already invested close to $50million in last couple of years to ramp up its Indian operations and plans to invest millions more in coming years. The Corporation is very excited on its ambitious expansion plans in India to double the existing capacities of its manufacturing facilities at Noida and Hosur and utilizing the same for its all business areas. Terex expansion programme also includes strengthening its focus on R&D, developing new market initiatives and improving further its supply chain presence. The corporation is open to invest more if demand for its products and services goes up to play a more proactive role in manufacturing and supplying new CE products and services to facilitate building a globally efficient competitive construction equipment market in India.

Terex in India manufactures - Backhoe Loaders & Skid Steer Loaders in its Noida facility and Crushing and Screening equipment at its state-of-the-art Hosur facility and very soon this facility would start manufacturing Tower Cranes. Apart from the indigenously built equipment, there is full range of cranes-tower, crawler, mobile and range of aerial work platforms that Terex markets in India. In a short span, the India operations has already crossed $100 million turnover in 2010 and is aiming to cross $500 million by 2015.

Talking about the acquisition of Demag Cranes and the proposed JV with Russian construction equipment company, Mr. Jehangir Ardeshir explained the rationale behind these-to expand and diversify, generate new revenue sources by entering into new areas and geographical territories where there were opportunities for business growth. The most prudent way to look at these developments could be viewing diversification and acquisition as a way to extend and strengthen company's domain capabilities on the one hand and evolve a hedge to mitigate risks in the cyclical market of construction equipment with periodic highs and lows being witnessed in various regions on the other hand. Explaining details about the proposed joint venture with the Russian company—GAZ-having four manufacturing facilities in Russia, the joint venture could undertake co-manufacturing of each other's products. Acquisition of Demag crane portfolio, including Demag crane manufacturing facility in Pune, said Mr. Jehangir would strengthen Terex's crane segment, thus making Terex India's largest manufacturer and supplier of crawler, tower, mobile and overhead crane, industrial cranes, crane components, and port equipment.