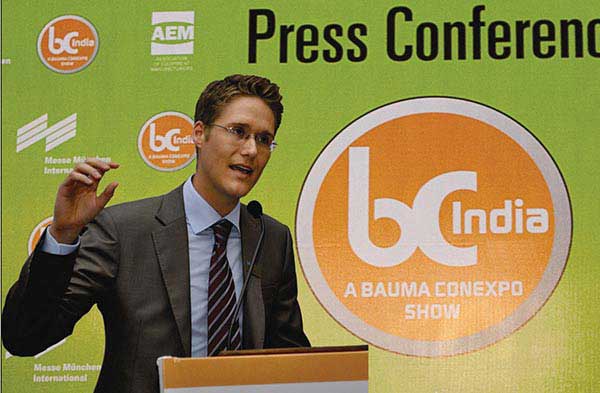 “bC India will serve as confidence builder in the market and will go a long way in boosting business opportunities and positive sentiments” says Mr. Thomas Lofler, CEO, bC India Expo

In a given scenario of rupee devaluation, skyrocketing funding cost and unprecedented spiral in the cost of input materials, what contributory role bC India is going to play?
The BAUMA CONEXPO SHOW - bC India is a market place where buyers and sellers of construction equipment come together. We do not expect bC India to be influenced by these factors as we are speaking about a national phenomena which an exhibition is unlikely to change. However, we hope that bC India will serve as confidence builder in the market and will go a long way boosting business situation and positive sentiments.

In contrast to the last edition, how do you view the success of the 2013 edition?
bC India 2013 is a special edition as it grew tremendously, even in times of general economic slow-down. We will have more exhibition space than in 2011, more exhibitors and expect more visitors. The positive feedback from exhibitors and visitors shows us that there was a need for a construction equipment show in Mumbai and that we introduced the show exactly at the right time.

As compared to the bC India 2011 when you faced severe space shortage, what sorts of steps have you taken to accommodate maximum number of exhibitors and visitors?
At bC India 2011 we had a long waiting list as we did not expect such a high demand for space by our exhibitors. Therefore for 2013 we made sure that more exhibition space will be available. We increased the space from 88,000 to 150,000 square meters in order to accommodate more exhibitors with higher space requirements. The marketing campaigns went very well so that we can proudly say that we are on the right track with regard to our targets. As many as 659 exhibitors have been allocated so far and we are going to reach our target of 700 very soon. With regards to the visitors, a survey conducted during bC India 2011 helped us to identify the channels through which most visitors were attracted to the show. Accordingly for 2013 we focused on the successful channels in order to reach out to an even higher number of targetted audience than in 2011. Just to give one example: we have increased our online marketing activities for 2013 as we found out that lots of buyers visited bC India 2011 as they learned about our show on the internet.

What about the growth percentage of exhibitors from Indian players? Given the current scenario how do they perceive bC India?
Compared to 146 Indian exhibitors in 2011, 238 will be participating in the coming event which is a growth of 63 per cent and a proof that the success of bC India 2011 encouraged a lot more Indian companies to exhibit at our event – a great result for us.

Would you like to elaborate on the allocation of stalls and their visitors’ friendliness?
As compared to bC India 2011, we have two separate exhibition halls at the upcoming event. This helps us enormously in creating different clusters. Even within the halls same product groups are allocated together. This makes it easy for the visitors to compare products of the same segment. Please check our exhibitor database where you find all exhibitors and their locations according to their segments: www.bcindia.com/Database. In the outdoor area it is a bit more difficult to create clusters as the crane manufacturers have to be allocated away from each other in order to avoid boom collisions in case of strong winds. Safety is a very important issue for us. Helmets will be mandatory in the built-up period as well as safety ropes for workers working above three meters height. Dealers of safety equipment will be on-site to sell or hire-out its helmets and safety ropes.

Can you give an overview about the progress of on-line registration?
The online registration is going well. Visitors from 26 countries have already registered for bC India 2013. The big advantage of registering online is that the ticket will be free of cost. Visitors registering on-site will have to pay Rs. 300/- for a day pass or Rs. 500/- for all four show days. That helps us to keep the quality of visitors very high. Another advantage and innovation is that after registering online the visitor receives his valid ticket by e-mail. It just needs to be printed – Hogaya! The process takes less than five minutes. I would like to encourage you to try it yourself at www.bCindia.com/register. See you soon at bC India 2013.