Pruksa Real Estate Public Co. Ltd., a leading company for residential construction using precast concrete elements in Thailand has commissioned its second precast plant together with the Progress Group, a full-range supplier for the precast concrete industry. With an extraordinary investment in equipment from Ebawe Anlagentechnik and Progress Maschinen & Automation, both subsidiary companies of the Progress Group, Pruksa has built a new solid wall plant with enormous capacities and in doing so has further strengthened its market position. 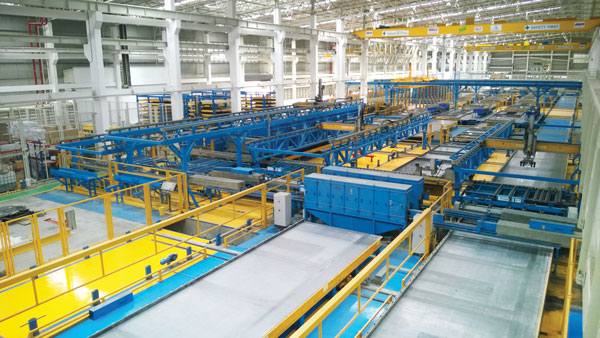 It is already the second high-performance plant to be installed by Ebawe and Progress at the end customer Pruksa in Thailand. Following the commissioning in 2010 of the first fully automated plant with a capacity of 10 pallets per hour, the Asian building contractor has set the bar even higher this time: the new plant is equipped with an even higher level of automation in order to ensure an increased capacity of 12 pallets per hour. Particular refinements in this second new plant, which was erected in the Nawa Nakorn industrial area near Bangkok, include automatic picking and insertion of the reinforcement meshes, the automatic washing of the concrete spreader and bucket, the smoothing of the solid wall elements by means of six automatic power trowels and an extensive outdoor storage system with automated warehouse management.

'Green' plant
Pruksa knows the needs of the Thai market very precisely: having been in business for over two decades, the corporate philosophy of offering high quality living space at affordable prices has proven successful. With the new plant Pruksa can achieve an additional capacity of 480 houses per month. In order to secure the demand on a long-term basis, the Thai building contractor has its own department for new developments: the Pruksa Innovation Centre concerns itself with new trends and ideas for building processes, building materials and building methods. 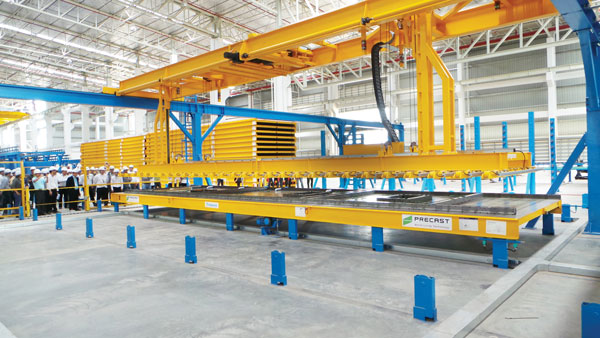 Much use was made of automation in the new plant: the automatic picking and placing of the meshes in the shuttered pallets is carried out by a handling spreader bar.

The second newly delivered Progress Group plant not only makes use of the latest German-made machine technology, but also meets the high demands for environmental friendliness. This 'green' plant was equipped with a recycling system that separates surplus concrete and dirty water from each other and feeds them back to the production process for further use. For Pruksa it was also important to reduce the noise levels of the machines in order to create a more healthy and pleasant working climate for the workforce.


Production sequence for the manufacture of solid wall elements
A total of 140 pallets circulate in Pruska's new plant. A production cycle starts with the manual deactivation of the shuttering magnets. At the demoulding station the pallets are initially scanned and the shuttering elements are automatically lifted off by two demoulding robots and set down on a conveyor belt which takes them through the cleaning unit. Following the removal of the produced concrete elements, the pallets are conveyed onwards by transverse displacers and cleaned with the stationary cleaning unit. The release agent spraying unit applies a thin film of oil to the shuttering surfaces and thus prepares them for the next cycle. 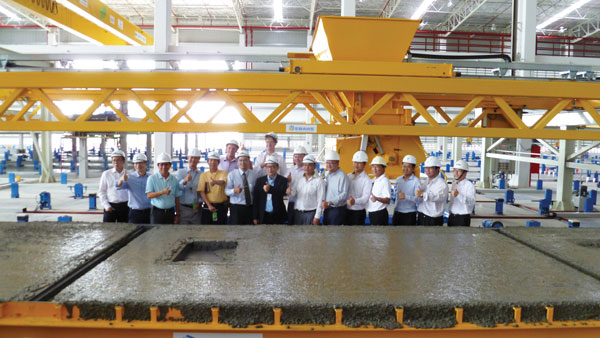 Thumbs up for the successful concreting of the first elements! The teams from Pruksa and Progress Group did their utmost to keep to the contractually agreed date.

The required reinforcements are meanwhile produced just in time in accordance with the data sent by ebos®. The new plant is equipped with a fully automatic mesh welding machine, a handling spreader bar for the automatic placement of the meshes, a mesh buffer that serves as an intermediate store, a trolley car for the produced reinforcement meshes as well as an automatic stirrup bending machine. The special feature is the enormous saving of time achieved with the mesh buffer. This makes it possible to produce the reinforcement meshes in advance, to store them intermediately and to insert the appropriate finished mesh without delay when the pallet drives in. Production is thus not only flexible, but also efficient.

The new bucket track ensures the supply of fresh concrete at the discharge point. The elements are concreted with a concrete distributor that discharges over the full width of the pallet and has a volume of 4 m³. A single concreting process is thus sufficient for the majority of the elements, which leads to considerable time savings.

The freshly discharged concrete is compacted with the aid of four compaction units that set the pallets in horizontal motion. The element is drawn off and smoothed to the desired height by a vibrating levelling beam. Attached external vibrators perform additional compaction according to the concrete layer depth.

The washing of the bucket and concrete distributor was automated in Pruksa's new plant: both items of equipment drive without manual operation to the washing station, where they are automatically washed with the aid of a spraying lance and various nozzles. The water used for washing as well as the residual concrete are separated by a recycling system and fed back to the mixing plant for further use.

A total of six power trowels and 24 smoothing places are available for the fine smoothing of the element surfaces. Smoothing takes place fully automatically and without manual operation. This ensures a very finely smoothed concrete surface that can be painted without later rework and additionally achieves high savings on personnel. A storage and retrieval machine places the pallets for hardening into a stacking rack that has more than 112 hardening places. Following the dwell time in the rack calculated by ebos® the pallets are automatically removed. Four tilting units are available for the removal of the finished wall elements.

Outdoor store with automated warehouse management
The elements removed with the aid of a crane are placed in transport cradles, so-called racks, which are taken up directly by a cross-lifting truck of the run-off truck. The run-off truck transports the racks to an enormous, automated external storage system and transfers them there to one of three trolleys, which drives the racks to the appropriate storage place in the outdoor store and deposits them there. For transport to the building site, three further run-off trucks with cross-lifting trucks pick up the racks from the outdoor store again and transport them to the collection places for the truck loading. The store has a capacity of 450 racks.


Tailor-made software solution
ebos® takes care of the control, monitoring and optimization of the entire precast element production in the new plant and convinces with a simple and intuitive operating concept. Thanks to its numerous functions and various features, complex interface problems are eliminated and work processes are facilitated for employees in the entire plant.

Strong growing industrial nation in Southeast Asia
With an estimated current population of about 69 million people, Thailand is one of the 20 most densely populated countries in the world. There is enough room and the tropical climate also favours building all year round. It is therefore hardly a surprise that demand is constantly growing for inexpensive, but nevertheless high-quality housing that is also earthquake-resistant and heat repellent.

Pruksa's range of town and detached houses as well as single-storey and multi-storey freehold apartments covers precisely these needs. Customers can choose between numerous variants and styles. The ordered building is always handed over turnkey and is subject to strict quality checks.

Unlike most builders, Pruksa carries out the construction of the projects itself, knows all the project-relevant specifications and guarantees a detailed design in accordance with the order. The entire building project is supervised from the groundbreaking to the end customer by the company's own engineers and foremen, who rigorously control the construction time and costs in addition to quality assurance. External suppliers are hired only for certain performances such as foundation and roofing work and must adhere to Pruska's strict standards and specifications.

With this strategy the building contractor has managed to become the low-cost market leader among Thailand's builders and is considered today to be the leading manufacturer of solid walls in the worldwide precast industry.