Why Brick Bat Coba Not the Correct Method for Terrace Waterproofing? 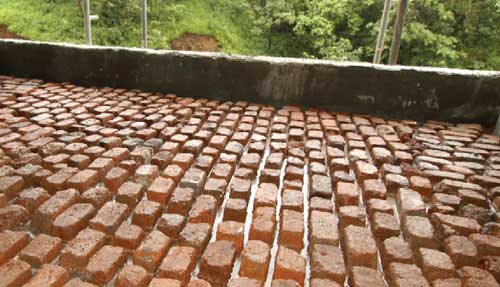 India is having more than 4000 kms of coastal line. Generally, these coastal areas receive more than average rainfall in the rainy season. The homes in these coastal areas are, therefore, more prone to leakages from terrace and walls. This not only led to peeling of paints and ruining the interiors but also led to growth of fungus. Such unhygienic conditions can be detrimental to the health of families living in these houses.

So, how can we tackle such severe leakage issues? In India, terrace waterproofing has always been done with very traditional materials. Typical conventional systems like brick bat coba, Lime terracing or the "Mud Fuska" technique are still very much prevalent. These systems are supposed to be offering terrace waterproofing solution with some insulation against heat.

The brick bat coba is used particularly for waterproofing of flat roofs, primarily RCC with some thermal insulation (mud phuska) in the coastal region. It consists of putting brick bats on roofs, to give a slope and then grouting the same with mortar admixed with various proprietary chemicals most in the nature of waterproofing compounds. In the new construction house, it provides an excellent slope in a moderate cost, so that the water drains away.

Though this conventional way of terrace waterproofing is prevalent, it is not a correct way of terrace waterproofing method, it just gives slope to terrace to drains away the water accumulated on terrace. Over the years, it has been followed and believed to be the most trusted waterproofing system which unfortunately is not true. Many times, it is said that it provides heat insulation which is also not true. This claim can't be quantified as it is not measurable. Moreover, it has been observed that the coba surface attains the same temperature as the bare cement slab during the peak hours in summer.

This conventional method has severe following limitations, hence it can't be called as a waterproofing method.