Water is a vital resource, but also a construction material’s greatest enemy, since rain, ground water and surface water can cause rapid and extensive damage to buildings. The solution lies in water-repellent construction materials with sealing properties such as cementitious slurries modified with dispersible polymer powders.

Water, in liquid or in vapor form, is the most destructive weathering element for buildings constructed of materials such as concrete, masonry, and natural stone. Waterproofing techniques therefore must preserve a structure’s integrity, functionality and usefulness for the whole of its life. Due to the harsh conditions of the monsoon, there’s a special challenge for waterproofing systems in India. To eliminate all possible causes of water intrusion, the exterior walls, the roof and the basement of a building must be completely covered with waterproof material. All waterproof measures must be part of a whole system and must interact totally to be completely effective in preventing the ingress of water.

Should one component of the system fail or not interact fully with all other parts, leakage can occur. Possible damage, deterioration and unnecessary repairs to building facades can be avoided by controlling groundwater, rainwater and surface water, as well as the transport of humidity in the form of water vapor.

Traditional sealing and waterproofing systems include bituminous materials, plastic waterproofing foils and metal tapes for interior and exterior applications. In addition to these systems, products based on reactive resins, purely dispersionbound, pasty products and cementitious waterproofing membranes are now widely used to seal and protect the outer surfaces of buildings and structural components against the action of water and moisture.

Cementitious waterproofing membranes have been used successfully to protect a wide range of buildings and structural components exposed to either periodic or long-term wetting, low hydrostatic pressure or, in combination with appropriate engineering, even high hydrostatic pressure. Cementitious membranes are used for waterproofing wet rooms and water tanks and, due to their excellent weathering resistance, also for exterior surface protection. Typical applications are the sealing and waterproofing of e.g., terraces, basement walls, water tanks, swimming pools, walls and floors in wet-rooms such as toilets and bathrooms. In addition, flexible cementitious waterproofing membranes are often used as protective surface-coating systems for structural concrete or to protect building constructions against aggressive chemicals.

Cement-based waterproofing slurries are easy to use, non-toxic, provide a monolithic, fully bound, joint-free surface and can easily be applied to substrates with complex surface shapes. In contrast to other systems, cementitious waterproofing slurries can be applied even to wet or damp mineral surfaces, and their physical properties are less temperature-dependent than bitumen based materials.

Simple cement-based slurries are still used for protection against surface water, but they are not suitable to seal against water under hydrostatic pressure. In order to improve the poor adhesion, the poor water impermeability and the extremely low deformability and flexibility, a polymer must be added to the system. The use of special additives such as water retaining agents, thickeners and rheological additives, combined with a polymeric binder, confers excellent workability and ensures that wetcuring of the applied slurry is unnecessary.

As polymeric binder, dispersible polymer powders have proved their value. Dispersible polymer powders are thermoplastic, plasticizer-free polymers derived primarily from vinyl acetate and ethylene. When water is added, these spray-dried dispersions “redisperse,” while retaining all the properties and functions typical of a liquid polymer dispersion. As the mortar sets, flexible polymer bridges are formed between the brittle mineral constituents of the mortar, producing a polymer film that acts as an organic binder. This greatly improves the mortar’s adhesion to a wide range of substrates and increases the system’s flexibility.

Standard, rigid mineral waterproofing slurries are polymer-modified, prepacked, drymix mortars which are gauged with water before being applied as a slurry by brush, roller or airless spraying, or, if less gauging water is used, by trowel. Standard or rigid waterproofing slurries can only be used for mineral substrates which are stable, sound and solid, and if there is no risk of crack formation, movement or dimensional change (e.g., shrinkage). Dispersible polymer powder is used as a polymeric binder to improve the adhesion of the waterproofing membrane to different substrates, to improve its cohesive strength, its flexibility, its abrasion resistance and toughness and, last but not least, the water impermeability and density of the membrane. Such polymer modified cementitious waterproofing membranes can withstand water pressure, not only from the positive side, but also, to a limited extent, due to their excellent adhesion and cohesion, from the negative side, if this is necessary for a special application. A dispersible polymer powder which confers a hydrophobic effect is the preferred type of polymer which should be incorporated in the drymix mortar.

In addition, the flexibility of a cementitious waterproofing membrane depends on the environmental conditions to which it is exposed. Flexible, cementitious waterproofing membranes are applied to substrates expected to be subject to shrinkage, vibration, movement, stress and crack formation and to substrates which are difficult to stick to, such as wood, steel, aerated light weight blocks and gypsum. Due to their high polymer content, these coatings have a low coefficient of diffusion and are resistant to chemicals such as chloride ions, sulphate ions, carbon dioxide and other aggressive products.

In practice, a major disadvantage of two-component systems is the possibility of mixing errors due to the lack of knowledge, experience and education of the workers concerning the appropriate dosage of the liquid component. Wrong doses may be used by chance or even intentionally in order to save money in the short term. If the dosage of the liquid dispersion is too low, the resulting membrane may not be waterproof if exposed to hydrostatic pressure or will, at the very least, have a reduced flexibility with a consequent failure of the system. Other reasons for not using two-pack systems are the difficult and risky handling, the expense and logistics difficulties and more time consuming and harder work on the job-site when handling two-pack systems.

Because of the many disadvantages of modifying a mortar with a liquid dispersion as mentioned above, the so-called one-component flexible cementitious slurry in the form of a premixed dry-mix mortar is increasingly being used. 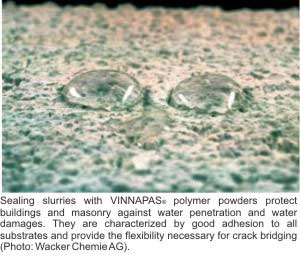 Dispersible polymer powders have been invented exactly 50 years ago in Germany. In 1957, the German chemical Group WACKER succeeded in industrially manufacturing the first powder binder as an additive for construction mortars, marketed worldwide under the VINNAPAS® brand. This invention revolutionized the entire construction sector, because it finally made possible the production of one-part, premixed dry mortars that merely needed reconstituting with water at the building site. To this very day, polymer powders give the construction industry key benefits, such as major cost savings, not to mention greatly simplified mortar production and handling. In cementitious sealing slurries, they not only protect buildings against damage from water penetration, but also against CO2, chlorides, sulfates and acid rain.

The higher cost of such products, due to the high dosage of the dispersible polymer powder, is compensated by the advantages of having a one-component, polymer-modified, dry-mix mortar, e.g., low-cost logistics and packaging, safety and reliability for the application by excluding mixing errors, and higher productivity on the job-site.

Wacker Polymers is a leading producer of state-of-the-art binders and polymer additives in the form of dispersible polymer powders and dispersions, polyvinyl acetates, surface coating resins, polyvinyl butyrals and polyvinyl alcohol solutions. These products are used by companies in the construction, automotive, paper and adhesives sectors, as well as by manufacturers of printing inks and surface coatings. Wacker Polymers has production sites in Germany, China and the USA, as well as a global sales network and technology centers in all major regions.