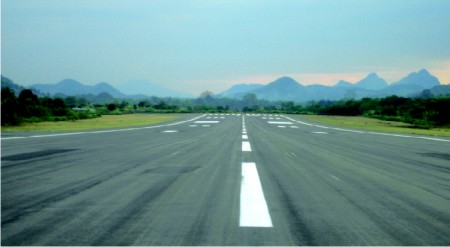 The performance of flexible pavements is closely related to the elastic deflection of pavement under the wheel loads. The deformation or elastic deflection under a given load depends upon surgrade soil type, its moisture content and compaction, the thickness and quality of the pavement courses, drainage conditions, pavement surface temperature etc.

The Benkelman Beam Deflection Method is thus widely used for Evaluation of Structural Capacity of Existing Flexible Pavements and also for Estimation and Design of Overlays for Strengthening of any weak pavement for Highways.

This method may probably provide relative idea of Structural Capacity of Existing Flexible Pavements of Runway of Surat Airport Project in three different sections as specified below for confirmation of the PCN values obtained in these sections:The results were obtained in terms of Characteristic Deflection in mm and shall mean that higher the Characteristic Deflection, weaker is the pavement structure.

This phase of operation, which shall precede the actual deflection measurement, consists primarily of visual observations supplemented by simple measurements for rut-depth using a 3 meter straight edge. Based on these, the road length shall be classified into sections of equal performance in accordance with the criteria given in Table 1 as per IRC: 81-1997.

As it is inexpedient of modify the overlay design at frequent intervals, it will be preferable if the length of each section is kept at a minimum of 1 km except in the case of localized failure or other situations requiring closer examination where minimum length of section may be suitably fixed.

The data collected during the condition survey shall be recorded as per the proforma given in Table no.02, 03, and 04. In case the pavement shows severe distress or signs of premature failure further investigations would be necessary to ascertain the causes and design remedial measures.

It was also decided to collect the sample of subgrade soil and moorum from three open pits to be excavated in three distinct sections of runway i.e

Moisture Contents and PI values of the samples of subgrade soils, so collected are to be used for computation of Rebound and Characteristic deflection.

All the procedure for conducting Benkelman Beam Deflection Test were followed as per the guidelines given in IRC: 81-1997.

The vehicle having 8170 kg rear axle load equally distributed over the two wheels, equipped with dual tyres with 30-40 mm spacing have been arranged. The tyre pressure of 5.60 kg/cm2was maintained. A mandral for making 45 mm deep and 12.5 mm dia hole in the pavement for temperature measurement is made and temperature readings were taken at the regular interval of 1.0 hr.

Benkelman Beam Deflection (BBD) technique is widely used all over the world for Evaluation of structural capacity of Existing Flexible Pavements and also for Estimation and Design of overlays for strengthening of any weak pavement. The various parameters like pavement surface temperature, subgrade soil type, its moisture content and compaction, the thickness and quality of pavement courses, drainage conditions and their influence on pavement deflection and service behaviour are also to be accounted properly while computation of the characteristic and true deflections. 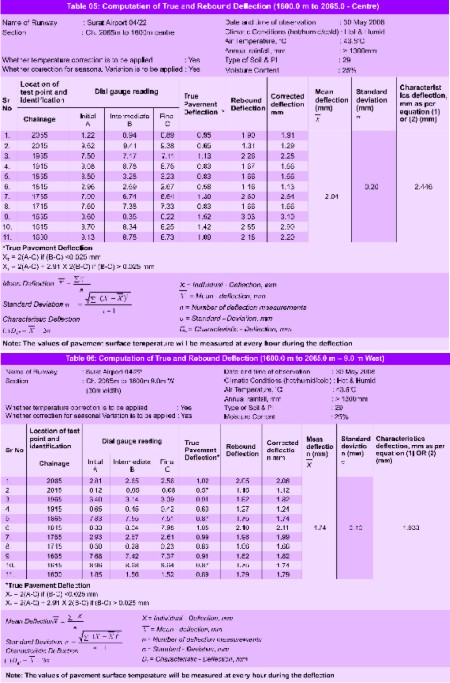 The rebound deflection (Measured Deflection) and Characteristic deflection computed as per IRC: 81-1997 guide lines are given in Tables 05 to 12. In order to know the strength of pavement section in the interval of 50.0 m length in terms of the corrected deflection, the graphs are drawn for each of 8 sets covering the detailed spectrum of runway; vide graph 01 to 03. 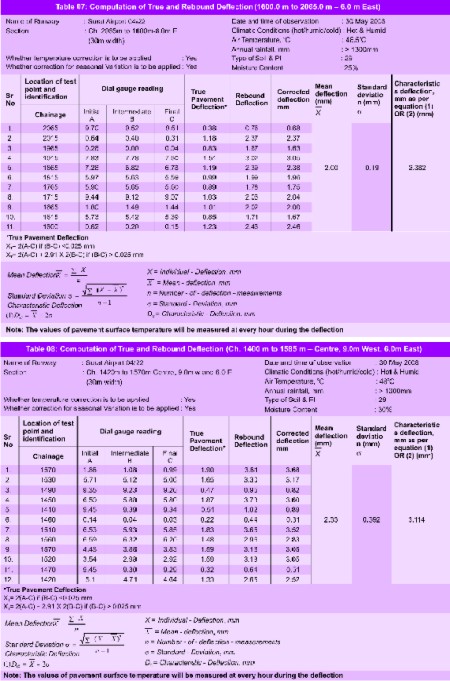 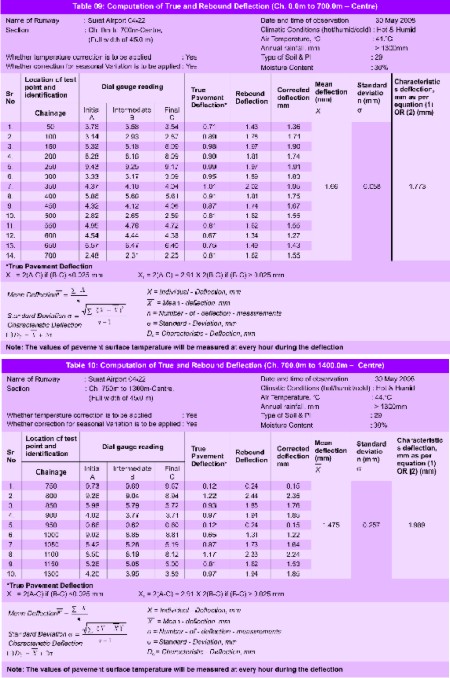 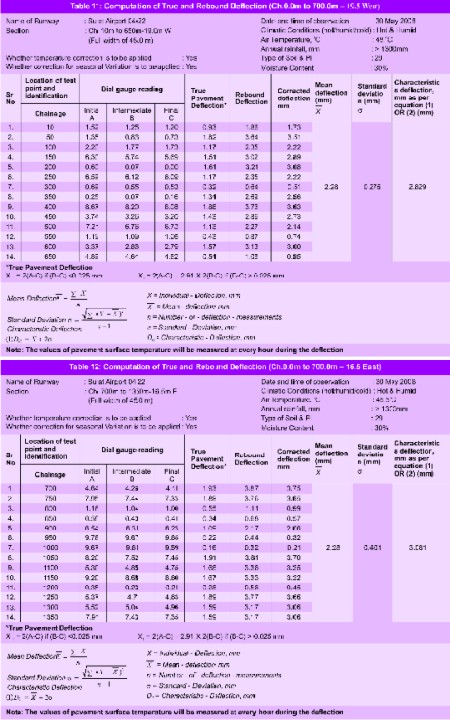 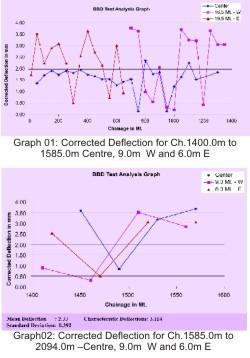 The entire length of 2250.0m of Runway for Surat Airport is grouped in five sections as per pavement condition, and each section of Runway have been classified relatively as Good, Fair and Poor based on visual observation and performance study, and Benkelman Beam Deflection measurements. This classification is shown in the Table No.13 along with the criteria based on which such classification is made.

The Table 19 gives fairly good idea of comparison of pavement condition classification by the two different independent approaches. The central portion of 30m width from ch.0.0 m to 1400.0m has been classified good based on BBD whereas fair to good based on visual observation and one year performance. Thus it indicates that all the two approaches are almost in common agreement. It may also be concluded that the widening portion of 15.0 m to 22.50 m on either side of East and West of centre line of runway from chaiage 0.0 m to 1400.0 m is classified as poor based on visual observation, last one year performance study and BBD values.

The pavement condition of full width of runway from chainage ch.1400.0 m to ch.1585.0 m have been classified as poor based on visual observation, last one year performance and BBD values.

It may also be clearly noted that the pavement condition of the section of runway for full width from chainage 1585.0 m to 2250.0 m is fair to good based on visual observation and last one year performance study whereas considered Fair/Good based on BBD values. 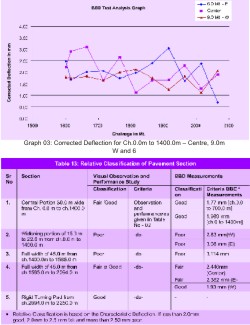 It may be noted that the existing pavement structure of runway for Surat Airport is required to sustain the dynamic load of Aircraft of A319, A320 and CRJ-700 for only one flight per day at present. If the flight frequency increases in future the same pavement crust thickness will not be able to perform as seen from the values of the Characteristic Deflections varies from 1.77 mm to 3.114 mm unless appropriate actions for strengthening of pavement structure are being taken as early as possible.

If the overlay for strengthening National Highway/Expressway is to be carried out for 10 to 100 msa, the thickness of overlay in mm in terms of Bituminous Macadam varies from 120 mm to 250 mm as per IRC: 81-1997 for characteristic deflection varies from 2.0 mm to 3.15 mm as obtained in this study. 70% of the design overlay thickness is to be considered, if the BM is replaced by DAC/SDAC/DBM/AC/SDC as per IRC:81-1997 guide lines. It may be noted that the strengthening of any given pavement structure for the applied wheel load varying from 0.1 to 100 msa become necessary when the characteristic deflection is found more than 3.0mm to 0.5 mm respectively.

It is also recommended that the characteristic deflections obtained in different section of runway from Benkelman Beam Deflection Testing should be appropriately used for strengthening the runway by providing suitable thickness of overlays as per the code of design, or practice followed in the department of AAI as early as possible for the safety of ‘Flight Operation.’

After creating a world record for laying Pavement Quality Concrete (PQC) for a four-lane highway of 2,580 meters length within 24 hours, NHAI has made yet another record by completing a single lane of the four-lane

Ashoka Buildcon, a leading highway player in India, has an impressive portfolio of 39 PPP projects, which is the largest in number in the country. With 40 years of experience in the core business of Highway Construction

Patel Infrastructure, an established construction, development, and maintenance service company and a NHAI contractor, has created a world record in the Infrastructure sector by laying Pavement Quality Concrete (PQC) for