The best and brilliant mind of the building world, including architects, planners, engineers, and builders of global repute recently descended to Bombay to hammer out a solution to the congestion of the metropolitan city by applying their classic and collective building caliber. They were all a part of the World Conference 2010, titled 'Remaking Sustainable Cities in the Vertical Age. The international conference was held in Mumbai in view of its great developmental potential to house a population of over 16 million and almost half of which lives in slums settlements.

The conference, was jointly organized by the Chicago based Council on Tall Buildings and Urban Habitat (CTBUH) and the Remaking of Mumbai Federation (RoMF), a focus group advocating the redevelopment of pre-1940 structures in the City. The World Conference has been conceived as a networking platform for urban planners and architects to exchange ideas and case studies from across the world as how cities can remake themselves sustainable. In the Bombay conference about 1,150 delegates from 16 countries, 72 global speakers and eminent government officials came together under one roof to discuss way outs to remake cities.

Addressing audience shortly after inaugurating the Conference, Executive Director of CTBUH, Antony Wodd said, "We are not going to talk about tall buildings over the coming three days. In fact, I would suggest that we should stop building towers as sufficient infrastructure is not there to support them." Antony Wood, who is an Associate Professor, Illinois Institute of Technology (IIT) USA, presented his plan of redeveloping C-Ward of Kalbadevi area prepared by his students at the Illinois Institute. His plan dwells on building interconnecting blocks of buildings encouraging social interaction and skillfully accommodating the requisite infrastructure.

In sheer contrast to what the title may suggest, the conference is not about how to create tall engineering marvels. Summing up the scenario, an eminent architect Charles Corea argued, "It is not how high a building can go, but what goes into the building." His comments suggested that creating highrises without the basic amenities would not be sustainable. Apart from basic facilities, they should also be attached with other infrastructure including roads, hospitals, schools, open spaces, and parks.

Driving home his viewpoint, he cited an instance of Mumbai where rather than retaining the open space next to a tall tower, more highrises are erected. "The problem is not about increasing density, but about how to provide more amenities to achieve the optimum density," he said pointing to the statistics that in Mumbai roads are just 8 percent of land utilized as compared to the mandatory international standards of 35%. 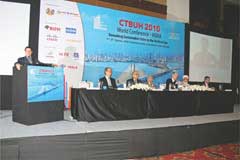 Reminding the gathering in the conference hall that was packed to the capacity, David Nelson of Foster & Partners, London said, "Cities across the world that have voted for indiscriminate highrises without sufficient amenities to support the numbers living there have witnessed masses abandoning such city centers and shifting to open and spacious suburban areas. Echoing his viewpoint S K Dass of SK Das Associated Architects, New Dehi, said that in cities marked by conflicting aspirations, lavish lifestyle and affluence raise the bar in consumption and the poor are excluded and left out causing rampant resentment.

The city, he added, must be seen as a diverse city with various groups of people trying to exert their claims over the existing resources. In the prevailing scenario the affluence, rising prices, and globalization will definitely lead to taller cities, the cities in India with its diversity and complexity have to be a bit of mixture of highrise, mid rise and low rise structures whereby honoring aspirations of all the people living there. Eventually, sustainability will have to build on the idea of the traditional cities which were structured up to certain extent by the government but later on allowed people to rebuild as per their aspirations. 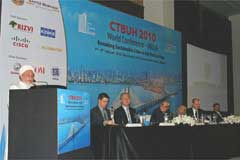 An interesting perspective on slum redevelopment was shared by Abis Rizvi, CEO of Rizvi Group, by saying "Let's not convert the horizontal slums into vertical slums". He reiterated that one must treat slum dwellers as customers, by understanding their necessities and requirements. Aesthetically designed amenities which are durable do not cost much, but go a long way in establishing goodwill and a win-win situation for all the stakeholders. He urged developers to enter slum redevelopment projects as rehabilitation does not involve creating just four walls but also helps in fulfilling a cherished dream for an individual.

"In fact redevelopment should be based on the consent of the affected stake holders only and they should be made partners and consulted at all stages during survey, planning, implementation, and post implementation. The conference has some unique global case studies of urban renewal and will be interesting to see their presentation, especially regarding community management," observed Vice President & CEO, MHADA, Gautam Chatterjee.

Dwelling in details on slum settlers he said that we need them more than vice versa, as we all make a beeline to the cheapest fruits and vegetable market, always look for cheap labor, affordable mode of transport and eatables at reasonable rates. These squatters are providing these services in and around all the dense cities including Bombay. Unsettling them is not the right solution instead we should build mixed blocks with all the minimum basic amenities and offer them accommodations at reasonable rental rates.

Citing an instance of his country, Director Urban Designing, Skidmore, Owings & Merrill, Daniel Ringelstein said that like in the US, India should explore an option to set up a Real Estate Investment Trust (REIT) to provide funds for the realty sector and also offer more incentives and tax sops. The REIT is a tax designation for a corporation investing in real estate that reduces or eliminates corporate income taxes.

Reiterating that India can seriously consider this option at a time when realty sector is looking up. The availability of various sops would be beneficial during times especially when there is a worldwide trend of population migrating from the countryside to urban areas in large numbers. Our goal as designers of urban cities, districts and blocks is to influence intelligent and sustainable growth, he observed.

Quoting United Nations statistics, he revealed that rapid urbanization of developing countries including India over the past decade has resulted in almost 200,000 people migrating from rural to urban regions somewhere on the planet everyday. The modern phenomenon points out that the trend translates into the need for the world to accommodate the equivalent of a new city of one million people every week. We have to find out way as how can existing or new urban centers accommodate this growth?

Senior Partner FXFowle Architects, New York, Sudhir Jambhekar, in his address called for freeing up FSI in metro and other cities in a selective manner. Claiming that restrictions on FSI, for example, about 2.5 to 3 points in Mumbai needs to be relaxed as there are limitations on horizontal growth. Mumbai and other cities, which are facing space constrains are going to witness vertical growth.

Putting across his views, Chairman Sunil Mantri Group, Sunil Mantri, called upon Government to provide tax sops under Section 80 1(B) to city developers, the facility, which was withdrawn way back in 2008. The sale of houses to NRIs and foreigners and procurement of material should be given export benefits on the lines of tourism and hotel sector. These benefits are available in the US, Europe, Dubai and Southeast Asia If offered the move will boost the Foreign Direct Investment into the realty sector to the tune of $5 billion annually. Apart from this, the tax concession would give a much needed boost to developers to undertake mass and affordable housing projects, he claimed.

In his address to the conference the MMRDA Commissioner, Ratnakar Gaikwad, appealed architects, urban planners and investors to pledge investments for the metropolitan region. He Showcased Authority's multiple projects, including the 145-km metro corridor, the 100-km monorail project, iconic tower, innovative park, rental housing projects, the multimodal corridor and the funicular railway at Matherna. These projects will set the City together with its adjoining areas on the fast pace of development. While metro and monorail will act as capillaries to Mumbai's transport, the multi–modal corridor will establish a 140-km link between Virar and Alibaug with eight lanes for the vehicles along with dedicated lanes for buses and a metro track right in the median.

In his concluding remarks, he said that CTBUH is the world's leading body dedicated to the field of tall buildings and urban habitat and is the only recognized international source of information in these fields. Their presence in Mumbai will go along way towards helping Mumbai taking the vital first step. Currently, Mumbai is on the cusp of an exciting future and its dream of becoming a World Class City, however, can only come true if its citizens come together to make it happen.