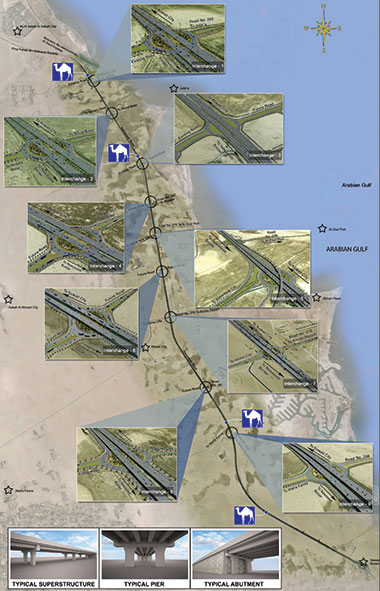 The goal was to refurbish and reconstruct Al Nawaseeb Road so as to improve access and safety on the roads: The Nawaseeb Road corridor is upgraded to provide free flow traffic by eliminating all existing U-turns and changing them to new roundabouts at all the interchanges.
Infrastructural projects in Kuwait are still the focus of local government-backed investments. In order to improve connectivity, regional and global projects in the infra sector are viewed as a state priority. A huge number of major infrastructural and transportation projects are connected to the Kuwait Development Plan 2015-2020. One of such projects is the refurbishment of the Nawaseeb Road, which is seeing re-construction of 45 km of the six-lane dual carriageway (three in each direction), with a provision for space for future upgrade/expansion with the addition of one lane in each direction.

The goal was to improve access and safety on the roads; therefore, the Nawaseeb Road corridor is upgraded to provide free flow of traffic by eliminating all existing U-turns and making roundabouts instead at all interchanges. This includes 18 elevated three-lane bridges and one elevated two-lane vehicular flyover, all of which comprise 13 km of motorway on reinforced earth ramps and retaining walls. 4 elevated Camel Crossings with 3 km of roadways on reinforced earth ramps and associated retaining walls, complete the project.

8 bridges out of 9 are designed using precast concrete T-beams manufactured at a special production site alongside the road and not far from the construction sites. The ninth bridge is a combination of precast concrete T-beams and cast in-situ box girders. The precast elements are produced by Arab Contractors, a leading construction company in the Middle East and Africa, and an expert in a widely diversified field within the construction industry. Its projects include public buildings, bridges, roads, tunnels, airports, housing, water & sewage projects, wastewater treatment plants, power stations, dams, hospitals, sports buildings, restoration of monuments, irrigation, producing ready-mix concrete, shipbuilding, electro-mechanical projects, engineering consultancy, manufacturing and assembly of steel structures. 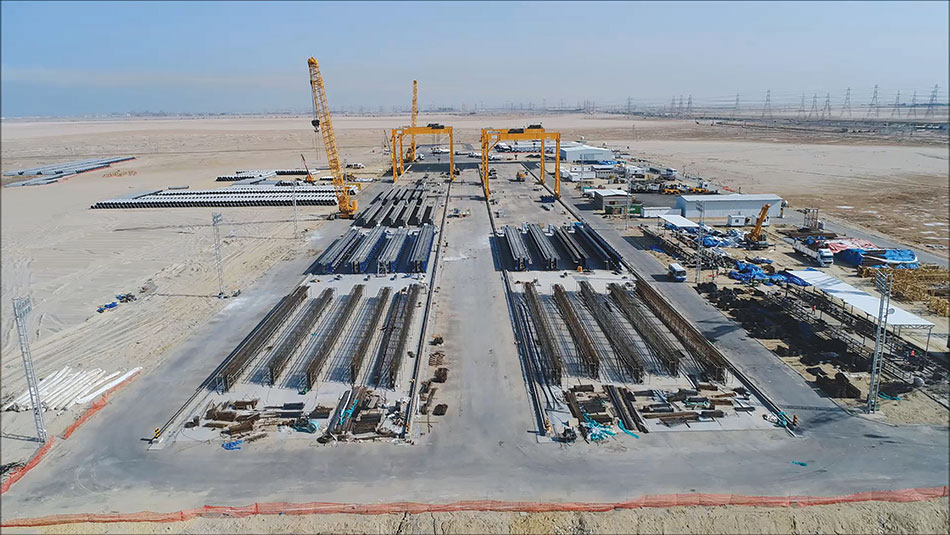 9 of the bridges are constructed with precast concrete elements, which are produced on a local precast yard by using of moulds from Tecnocom.

For the Nawaseeb project, Arab Contractors invested in moulds for bridge girders from Tecnocom, Italy, a specialist for precast concrete element moulds and part of the Progress Group, which is a leader in precast technology. With a total of 8 moulds, several elements are produced simultaneously: in 4 moulds girders, lengths of 40.5 meters are produced, while the other 4 moulds produce elements which have a length of 44.5 m; so 8 post-tensioned elements can be produced daily.

The precast element production site placed nearly half way from the two furthest construction sites, has the advantage of transporting the elements easily to the respective locations for their installation. For the 9 bridges, a total of 820 girders have to be produced. 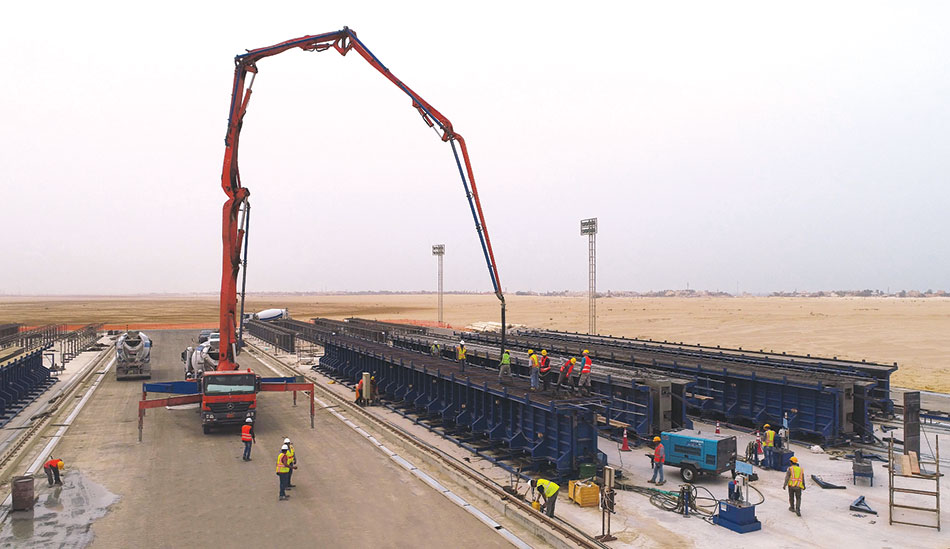 The moulds can produce elements with lengths ranging from 40 – 45.5 m, and can be adjusted to the required size.

The bridges are designed with one additional lane, separated by barriers. This technical detail will allow converting bridges from three to four lane structures, which will enable future widening of the motorway without additional structural works on the bridge. Building the bridges with precast concrete elements enables very quick installation. As they are reinforced and post-tensioned, they offer great resistance to heavy loads, and the amount of concrete required is reduced. 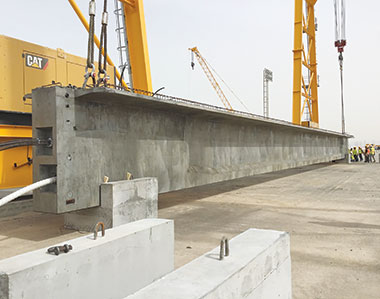 The elements are produced post-tensioned. 8 elements can be produced daily. For all bridges a total of 820 girders are required.
The precast element production site was planned and built in partitions for a smooth production process. In the first area, the rebar cages with post-tensioning ducts and strands are produced and the cages are placed into the moulds. At a next step, after the cages are inside the mould, the casting of the concrete into the T-beam shaped forms take place with an initial post-tensioning. As the moulds made by Tecnocom are built in a modular way, each mould can be adjusted to produce the required length of the elements. They are also designed to be opened and closed hydraulically at the lateral shutters to increase productivity, and reducing the time drastically for these operations. The finished elements are then placed on u-chairs; the final post-tensioning takes place, and the ducts are grouted. The elements are then stored before they are loaded and transported to the respective construction sites to be mounted at the respective bridges.

Due to the convenient location of the production site, transport time has minimized as the elements are moved within a radius of 20 km only. The whole project was started in 2017 and construction of the bridges, camel crossings and associated mechanically stabilized earth retaining walls will be carried out from February 2018 to April 2020. 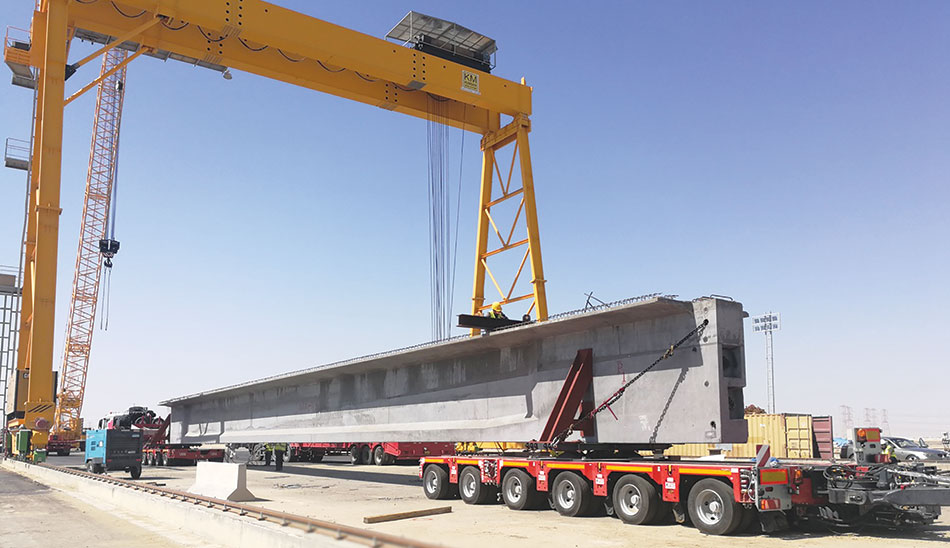 El-Moataz Bellah, Project Engineer at The Arab Contractors, says: "The cooperation with Tecnocom has worked very well as they have been a great partner in this project, and have supported us with their knowledge in building moulds for high efficiency production."