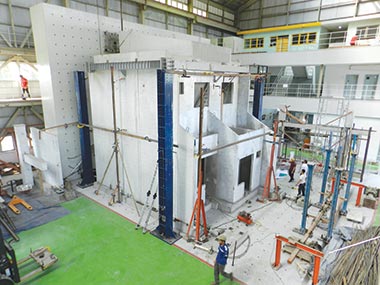 PT Modernland has made earthquake-proof construction a central aspect in the planning of its new precast concrete element premises and of its overall projects.
The Pacific Ring of Fire is a volcanic belt which rings the Pacific Ocean on three sides with a length of over 40,000 km. The friction of the tectonic plates makes this region a zone of frequent earthquakes, which, in the recent past, have caused a large number of buildings to collapse, posing a permanent threat to the people living there. Indonesia, with its population of more than 250 inhabitants and millions of tourists every year, is one of the most severely affected countries in this region.

In view of this, leading property developer PT Modernland, a member of the Modernland Group, Indonesia, and a recent precast concrete element manufacturer, has begun to focus on earthquake-proof construction. While planning for the eventuality (an earthquake), the company conducted an actual seismic test on a test building at a construction material testing laboratory in Bandung. The aim of the test was to analyse the behaviour of the house under extremely high seismic activity, in order to be able to offer its customers in the future, a safe precast concrete element house or construction system with load-bearing walls.

The test simulates three earthquake magnitudes: In the first test phase, the house was subjected to seismic activity of the type which occurs every 500 years. In the second test phase, the house was tested against the type of earthquake which occurs on average every 2,500 years; this corresponds to a magnitude of more than 8 on the Richter scale. Potentially, in a third and last phase, if this is possible, the house will be tested up to the total static yielding point or to the maximum of the laboratory's testing capacity. 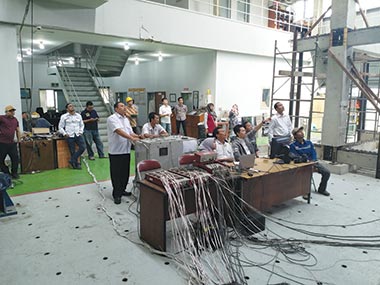 PT Modernland did an actual seismic test on a test building at a construction material testing laboratory in Bandung. The aim of the test was to analyse the behaviour of the house under extremely high seismic activity.
In preparation for the tests, during production, more than 200 load meters were integrated into the various precast concrete elements. In order to provide the laboratory with a flow of data during the tests, cameras in the interior and on the exterior of the house allowed the scientists to see what was happening as the tests progressed. The seismic magnitudes were simulated with the aid of a hydraulic system, which provided the energy for the different loading conditions.

The test result was positive. The sound, considered static planning and technology of the building, together with the professional production of the house in PT Modernland's new EBAWE precast concrete plant produced the result that even in the case of the earthquake of the type, which occurs only every 2,500 years, the building showed only minor damage in the form of hairline cracks and local spalling in the assembly gaps in the outer wall of the building. There was at no time any risk to persons. Even in the case of the heaviest test loading, the house withstood the seismic forces. On conclusion of the "Earthquakes every 2,500 years" test stage, the test building passed with flying colours with a classification of I.O. (Immediate Occupancy).

The positive test results mean that PT Modernland will, in the future, be one of the first companies in Indonesia to be authorised to construct multi-storey precast concrete element buildings with load-bearing walls. This successful earthquake test has confirmed and boosted confidence both within the company and among its potential customers as regards the possibilities for safety by constructing with precast concrete elements.