When temperature plunges in winter, prices of natural gas, heating oil, and electricity go up. Suitable thermal insulation can help optimize the indoor climate and slash energy costs by up to 60 percent. WACKER offers solutions in the form of polymer binders for customized exterior insulation and finish systems (EIFS) that make for an ideal indoor climate and effectively counter rising energy prices. 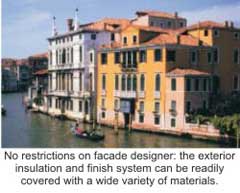 Protecting immediate environment from the vagaries of the weather has been a recurring theme throughout the history of mankind. Heating in winter is not a solution in itself; to shield themselves from summer heat, our ancestors had to rely on thick walls. In winter, these were equally effective in preventing rapid heat loss. The principles of the rmalinsulation were known even by the Pueblo Indians, who would built their houses with air dried bricks (known as adobe bricks) made of clay and sand. In dry areas, Adobe bricks heat up in the sun and radiate the heat into the environment during the night. Thanks to this effect, the buildings remained cool during daytime and were warm at night. In the 16th century, the art of making adobe bricks spread from Peru and Mexico to Spain, whereas in northern Africa and the Middle East, they are still in use today to build houses. This ancient Indian technology had many merits, but adobe bricks cannot meet the demands of modern building construction. Their lack of resistance to moisture is just one of the reasons why the bricks would soon cause problems in our latitudes. Then there is the issue of thermal insulation; against the background of ever rising energy prices, this has now taken on a new dimension. For the greatest energy-saving potential is in thermal insulation, completely irrespective of whether a building needs to be heated or cooled.

Heat loss via radiation is usually underestimated. And this, although it is precisely the surface temperature in our immediate surroundings, such as walls, floors or ceilings, that have a crucial influence on our personal comfort. The U value describes the heat flow in watts (W) that passes through all the layers surrounding a building element, over a surface area of 1 m², due to a temperature difference of 1 K (W/m²K). The smaller the U value is, the less heat is lost by the building element. "The U value is a means of providing realistic information on the heat losses by various building elements or combinations thereof," explains Klaus Bonin, technical expert at WACKER's Construction Polymers business unit.

For outside walls, the U value is an important parameter for realistic estimations of heat losses and energy-saving potential. A well insulated building will have U values between 0.3 and 0.4 W/m2K, while poorly insulated walls may have U values well above 1.5. External insulation and finish systems (EIFS) are the simplest and most reliable method of preventing energy losses.

In many regions of the world, winter heating costs are much less than in Central Europe due to a warmer climate. But warmer climates also take their toll. For example, poorly insulated houses can become unpleasantly hot in summer. The night affords little relief because massive walls store the sun's warmth and radiate it again both inwards and outwards when the outside temperature drops. In other words, an air-conditioning system is a must for everyone living in countries like Spain, Italy, and China and wishing to have a certain level of comfort at home when outside temperature is high. But air conditioners often run 24 hours a day in regions with hot summers, and thus guzzle huge amounts of energy. And that costs a lot of money. After all, air conditioners run on electricity, so that cooling a building in summer is more expensive than heating it in winter.

An Effective way to Ward off the Heat:

A facade covered with an EIFS wards off heat very efficiently. The EIFS is applied to the exterior and thus prevents the wall material from heating up unnecessarily in mid-summer. New buildings can be designed with EIFS right from the start, but they can also be applied to old buildings under renovation.

The high flexibility of an EIFS is due to a clever combination of materials. The core element of an EIFS is a combined adhesive, assembly and coating system in which heat-insulating materials such as polystyrene, rock wool, slabs of expanded mineral materials or even cork panels are fixed to the outside walls of a building and then coated. Through its VINNAPAS® polymer powders, WACKER has played an integral role in the development of exterior insulation and finish systems since they first came on the market. This is because insulating materials such as polystyrene board do not form a stable bond with cement.

"By contrast, adhesive mortar with just three to four percent of VINNAPAS® added to it will form a stable and permanent bond with the polystyrene board," explains Bonin. Improved adhesion to all other substrates is obtained, too, from concrete through to brick or wood.

Since EIFS reduce the temperature between the air in the interior of a building and the wall surfaces; they greatly improve the building's living quality. The movement of hot or cold air caused by a radiator or an air conditioner means that the air circulates continuously within the rooms. As a result, dust, bacteria and excrement from household dust mites are stirred up and impair the quality of the respiratory air. The polluted air can trigger allergies and burden mucous membranes.

The benefits of modern exterior insulation and finish systems are not limited to reduced energy costs and a healthy indoor ambience. EIFS also add considerable value to an object. As confirmed by the German EIFS Technical Association, these systems have the supplementary bonus of effectively protecting masonry from moisture damage and cracking. Irrespective thereof, EIFS offer a broad range of options for adding aesthetic value to a building because every façade can be designed individually. It is of no consequence whatsoever in this context whether EIFS are to be applied to old buildings under renovation or to a large, modern building that is still on the drawing board. 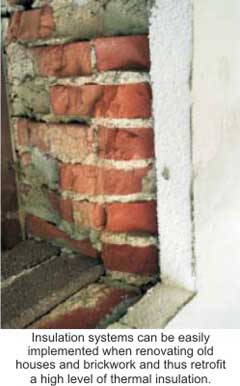 EIFS consists of an "intelligent" material composite resembling a sandwich, the various components of which have completely different functions. Starting from the wall, the first layer consists of adhesive mortar modified with VINNAPAS® dispersible polymer powder. The adhesive mortar has two functions within the "sandwich." For one, it creates a stable bond between the insulation board and the wall. For the other, it is able to level irregularities in the substrate. The added polymer powder also imbues the adhesive mortar with the necessary flexibility, enabling it to accommodate any slight shifting that may occur with time between the substrate and the insulation board. This layer is followed by the thermal insulation board, which may consist optionally of rigid, expanded polystyrene (EPS), or other materials. The thermal insulation board is protected from weathering and mechanical stresses by a reinforcing layer comprising a glass scrim fabric embedded in a cementitious dry mortar modified with VINNAPAS® polymer powder.

The reinforcing layer is followed by an alkali-resistant glass scrim fabric that increases the mechanical stability of the EIFS. The outermost layer, which may be a decorative plaster, paint or a ceramic cladding, permits almost unlimited freedom of design.