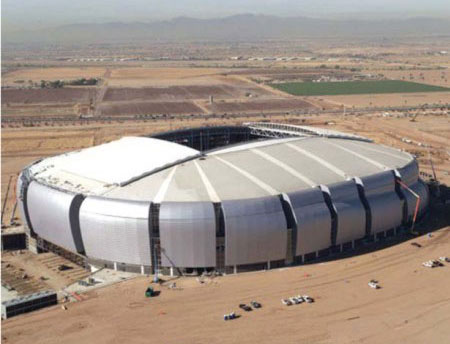 The new University of Phoenix Stadium formally known as the Cardinals Stadium is a multipurpose facility with a retractable roof and roll-out field. It is described as a marvel of design, engineering and technology unlike any other stadium in North America.

The stadium was detailed in Tekla Structures by BDS Steel Detailers on behalf of Schuff Steel Company, who took care of fabrication and erection. Tekla is proud to have been a part of the award-winning construction project. Tekla Structures' multi-user functionality allowed numerous detailers to work on the project simultaneously using the same structural model. Advanced 3D rendering facilities, visualization and reporting tools enabled communicating effectively between all project parties. The stadium submitted by BDS Steel Detailers won the Tekla Model Competition in 2005. 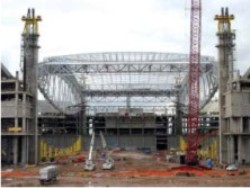 Designed by world renowned architect Peter Eisenman in conjuction with HOK Sport, Hunt construction group and Urban Earth design, the stadium is a unique and signature facility for Arizona. The exterior skin represents a barrel cactus and the building features, alternating sections of shimmering metal panels intended to reflect the shifting desert light alongside magnificent vertical glass slots allowing patrons a spectacular view of the horizon from any level of the exterior. There are 21 vertical slots on the exterior wall of the stadium.

The 63,400-seat facility (expandable to 73,000) encompasses 1.7 million square feet. It was opened on August 1, 2006, after three years of construction. Being a multipurpose facility, it hosts football, basketball, soccer, concerts, consumer shows, corporate events, and so on. 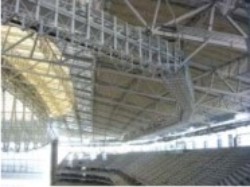 University of Phoenix Stadium, located in Glendale about 20 miles west of Downtown Phoenix, is the only stadium in North America that is capable of completely removing the grass playing field from the stadium. In fact, the grass field remains outside the stadium in the sun until the game day to get the maximum amount of sunshine and nourishment, eliminating humidity problems inside the stadium and providing unrestricted access to the stadium floor for events and staging. The tray rests atop tracks and rolls out on steel wheel sets powered by small electric motors. It takes approximately 45-60 minutes to move the tray completely in/out of the stadium. The tray supports approximately 94,000 square feet (over 2 acres) of natural grass.

The stadium's retractable roof provides the right balance of sun on the field and shade in the seats. An open roof allows fans to take advantage of Arizona's world famous climate and clear blue skies, but when closed allows the building to host large conventions, trade shows as well as other indoor events.

Tekla Structures through BDS Steel Detailers was involved with the Cardinal Stadium project from day one and have worked in a design build team with some 7 different companies at one time or another. Fortunately, the consulting engineer and fabricator utilize Tekla Structures capabilities. Use of the 3D Tekla model was invaluable in communicating between the teams and enabling all parties to see and visualize the coordination of the various trades. Schuff Steel sent an updated copy of the model on a monthly basis to view progress and to coordinate with the other sub-contractors on trade interface and fit up matters. The collaborative effort of all parties was enhanced by BDS ability to demonstrate and solve design and fit up problems through the powerful 3D rendered images sent out. The various contractors and consultants could then get an immediate appreciation of the problems at hand and solutions were promptly provided.

The entire stadium roof structure was detailed within a single multiuser model, which tested the limits of the software and hardware. A total of 3.675 multi-assembly drawings and erection drawings were completed, with 10.650 fitting sheets to accompany them. BDS comments "the multi-user function allowed us to apply an optimum number of detailers to the project to achieve the weekly progress expected on a project of this size. The advanced 3D rendering facilities enabled us to communicate effectively with all parties. The filtering and reporting tools along with close tolerance clash checking ability are the Tekla Structures functions that make the most impact on our work."

Master goes on to say "the virtual reality and 3D capabilities are enormously useful. We can move through the structure and view possible fit up problems at various fabrication and erection stages. These functions have greatly benefited coordination and communication with the design and fabrication teams. The ultimate upside is that 3D visualisation is definitely much quicker than traditional 2D drafting. And the fact that we were able to establish our own connection macros up front for the primary and secondary trusses and connections saved us excess time and energy." And with collaborative efforts, the stadium was completed on a schedule date with a sweet success.