Tekla's technology creates new opportunities for the plant industry. Tekla Structures, the most advanced building information modelling (BIM) software in the market, provides an accurate, dynamic, and data-rich 3D environment that can be shared by contractors, structural engineers, steel detailers and fabricators, as well as concrete detailers and manufacturers.

Used worldwide by leading firms for the power generation and industrial process facilities, Tekla Structures enables an integrated structural design and detailing process that drives reduced project delivery times with improved quality for significant cost savings on projects of any size, regardless of complexity.

The highly detailed structural models created in Tekla Structures enable the highest level of constructability and production control. Centralising model and non-model based data into the model allows for more collaborative and integrated project management and delivery. This translates into increased productivity, elimination of waste, and an enhanced value for structural modelling.

Modelling with Tekla Structures is the most advanced and integrated way to detail and fabricate all steel structures, such as commercial buildings, industrial plants, sports stadiums, Commercial Structures, Pre-engineered Buildings, Bridges, offshore platforms and jackets, including miscella neous steel work.

Tekla models can be shared with the major plant design systems, such as PDS, PDMS, SmartPlant 3D, during the FEED, detailed design phases, continue downstream for the creation of steel fabrication deliverables as well as concrete/rebar detailing.

Tekla Structures intelligently manages modification made to the structure. Ongoing revisions to the model and drawings no longer result in costly errors or delays in time schedules.

Tekla Structures enables to clash check designs with equipment and check structure access. It is also easy to check for clashes between a reference model (DGN and DWG) and the Tekla Structures model.

All required drawings and reports can be automatically generated from the accurately detailed 3D model. Drawings are associated to the model, so any changes made to the model automatically reflect in the output.

Alstom Power Boiler GmbH became familiar with Tekla during the Wai GaoQiao coal power station project in China. Until then, the company had been using other plant design and engineering software and knew little about the finer details of modelling with Tekla Structures. A subcontractor involved in this project had been among Tekla's customers for some time. As a result of this collaboration, it became necessary to confront the issue of data compatibility between Tekla Structures and the software that Alstom was using. The flexibility of Tekla Structures was used to maximum effect, ensuring seamless cooperation which led to the entire project being concluded successfully and on time.

Intergraph software was used to plan the systems, and external 2D software was used to handle the parts for the basic engineering. Workflow inconsistencies initially led to the parts being rejected in the planning process, which Tekla Structures managed to deal with later on. In this project, the ability to import Microstation format (DGN) reference models and to carry out highquality importing and exporting of object-oriented SDNF files was of great help. This was a decisive advantage for planning and modelling extensions to the existing construction. In conclusion, this kind of data compatibility guarantees success in international projects. After the work on the Chinese coal power station project was successfully completed, the modelling licences were transferred to Germany and have since been used by the company in Stuttgart.

The city of Huasco lies 700 km north of Chile's capital, Santiago. It is here that electricity provider Empresa Electrica Guacolda S.A. plans to commence operation of its newly built coal-fired power generation plant in September 2009. The collaboration partners on the construction of the plant were Mitsubishi Heavy Industries (MHI), one of Japan's leading heavy industry firms, and Edyce, which was responsible for on-site fabrication. By jointly accessing data using Tekla Structures, the two firms managed to overcome their respective time differences, distances and language barriers to achieve a remarkable improvement in the transfer of operational data. In the initial design stages, MHI utilised the linking function to bundle Tekla Structures and Staad Pro-software. By doing so, the two companies were able to exchange data, such as loads and boundary conditions, and to effectively integrate design techniques from structural analyses to draughting work plans, which resulted in enhanced design efficiency. High-scale precision in terms of PDS data compatibility also made managing the project data, including the piping, all the more effective.

Larsen & Toubro (L&T), a technology-driven engineering and construction organisation, bagged a contract from a power vehicle of Jaypee Group Jaiprakash Power Ventures (JPVL) for the supply and erection of the Boiler and Steam Turbine and Generator (STG) islands for the 2x660MW Jaypee Nigrie Super Thermal Power Project. The part of the contract for the Boiler Island has been given to L&T-MHI Boilers (LMBPL). 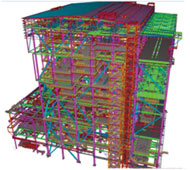 From this detailed boiler structure of approximately 15,000 MT almost 20000 part drawings and 13,000 assembly drawings were extracted during detailed engineering stage. This model involves all the complexities with respect to layout, interfaces with all Piping & ducting equipment /system as well as their operation and maintenance requirement.

Mr. B.K. Chaurasia, Structural Head (L&T MHI) mentioned that by adopting Tekla structures, there were huge productivity gains and reduction of engineering time cycle. He further cited that Tekla Structures has also helped them in eliminating duplication of efforts at various stages of analysis, design and detailing and thereby achieving complete freedom from risks of errors, misinterpretation and rework due to the errors slipping to the construction site.