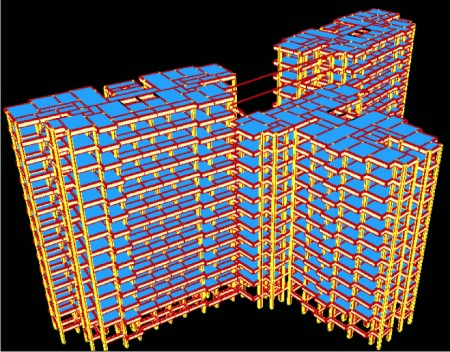 Structural design of earthquake resistant buildings has almost become mandatory now all over India. As such, we've implemented relevant clauses of IS:1893 (2002) and IS:13920 applicable for RC buildings in STRUDS. The intention is to provide a fast and reliable tool to structural engineers using which they can off-load the arduous task of cumbersome calculations to STRUDS and at the same time can apply their own good judgment for interpretation of results to provide appropriate practical design & detailing for all components of buildings like slabs, beams, columns and foundation. The best part of STRUDS is that, it calculates the EQ loads automatically from the basic parameters provided by user, unlike many other software, where user has to calculate & apply the horizontal loads on the space frame manually.

User has to provide only the basic parameters in a single window from which STRUDS automatically calculates the EQ loads on the structure. The generation of EQ loads can be done by any of the methods mentioned below:

In this method, stiffness of a frame is calculated by applying a unit load at the top of the each Plane Frame (Top floor is specified by user, otherwise program assumes the default top floor). Then the base shear is distributed in proportion to the relative stiffness of the frames. This Base Shear is distributed at floor levels as per the IS:1893 (2002). When the frames in both X and Y direction are properly formed, this method accurately computes EQ loads. 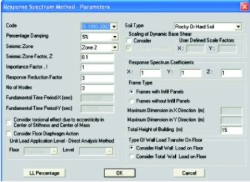 When you select this option, STRUDS calculates the base shear on the basis of the loading (dead and live load as per code provisions) on the structure. Once base shear is calculated, it calculates floor-wise shear (i.e. Wihi2/ "Wihi2). This floor shear is distributed to each column node proportionately, based on the reactions obtained from the gridanalysis of that floor. When the frames formation is irregular in both X and Y directions, it is advisable to use this method, because in such cases, the frame stiffness–direct analysis method may not calculate EQ loads accurately.

In this method, the EQ load is generated dynamically by Response Spectrum method. In this method, the response of the structure is worked out for the number of modes, as given by the user, and then the design forces are combined as specified in the relevant clauses of IS:1893(2002). This happens in following steps:

Provisions of IS:1893 Codes

STRUDS has the options of performing Response Spectrum analysis according to the provisions of previous IS:1893(1984) as well as the revised IS:1893(2002). This option enables the user to select the relevant code for the analysis. Sometimes structural engineer needs to check the design calculations for an existing building where seismic analysis was done as per previous code. In such a case, user can choose the previous code.

The effect of internal friction, imperfect elasticity of the material, slipping, sliding, etc in reducing the amplitude of vibration and is expressed as a percentage of critical damping.

The code does not provide explicit specification of damping for buildings. However, Appendix F of the code indicates the following values of damping for different types of structure.

User can specify the Damping factor for the entire structure in the basic parameters window. The default value of damping in STRUDS is 5% of the critical damping.

Depending upon the geographical location and the Seismic Zone in which the structure exists, these are the multiplying factors to be used with average spectra for response spectrum approach. The values of the seismic zone factors are automatically updated on change of the Seismic zone, however, if the user desires, the default value could be over written in the basic parameters window.

Depending upon the functional use of the structure as well as the hazardous consequences in the event of the failure, the Importance factor is assigned to every structure. This is specified so that important structures such as hospitals, government offices, airports etc should withstand even if rest of the buildings have suffered major damages due to an earthquake.

This factor is used for the combination of shears for all the modes. For building of intermediate height, value of Gamma may be obtained by linear interpolation. STRUDS sets the default value for gamma according to height of the structure, but user can change it in the basic parameters window.

IS:1893(2002), now broadly classifies the soils into three categories, that is Rocky or Hard soils, Medium soils, and Soft soils. This factor enables the user to make the necessary selection in the basic parameters window.

This factor depends on the perceived seismic damage performance of the structure, characterized by ductile or brittle deformations. The ratio (I/R) shall not be greater than 1.0. For structures having ductile detailing, the Response Reduction factor is higher and vice versa.

Scaling of Dynamic Base Shear

As per clause number 7.8.2 of IS:1893(2002), if we generate earthquake loads by response spectrum method, the design base shear (VB)dynamic shall be compared with a base shear (VB)static calculated by using a fundamental period Ta, where Ta is as per clause 7.6 where (VB) dynamic is less than(VB)static, all the response quantities (Member forces, displacements, story forces, story shears and base reactions) shall be multiplied by (VB)static / (VB)dynamic. In STRUDS, an option is provided to consider this clause or not to consider. If considered then whether the factor to be calculated internally or will be given by user can be chosen.

Torsional Effect due to the eccentricity between the Centre of Mass and the Centre of Stiffness can be automatically taken into account in STRUDS.

The Floor Diaphragm Action, constitutes, one of the most important features of STRUDS, for he earthquake load generation. If this option is selected, the effect of the slab rigidity is taken into account for the calculation of earthquake forces. In this case, a floor node is created at every defined floor level. The rotation about the Global Z axis(theta z), remains constant for all the nodes at a floor level, whereas the other two degrees of freedom, namely translation along the Global X and Y axes(u, v) at all the nodes, can be correlated, with the displacements at the defined Floor node. Consideration of the rigid diaphragm effect gives a better picture of the distribution of the seismic forces.

The user can account for the Soft Storey effect in STRUDS for Seismic analysis. However, the storey, which is to be declared as a Soft Storey, needs to be defined explicitly by the user. In STRUDS, user would need to define the upper level as well as the lower level of the soft storey, as well as the factor, by which the end actions for all the members of this soft storey would need to be modified. Once, you have done this, the beams at the upper and lower level, as well as the columns in between these two levels, will be designed for the elemental end forces obtained in the analysis multiplied by the factor, which you have specified.

In STRUDS, when the EQ loads are generated for the modeled structure, by any of the methods available for EQ load generation, these act, in the horizontal direction, that is in the X+, X-, Y+, and the Y- directions. However, if you want to specifically consider the EQ loads acting in the vertical directions, as in horizontally projecting cantilever balconies, STRUDS provides you the facility to declare these elements on which the Vertical EQ loads are to be considered, as horizontal cantilevering elements. Once, user has declared these elements, as Horizontal Cantilevers, while designing such elements, depending upon whether the design load combination involves the EQ loads, they would be designed for Vertical EQ loads also as per relevant clause of IS:1893–2002, wherein the design forces are computed as given below:

The total seismic weight W, acting on the cantilever beam is given as,

This load is assumed to act at the center of the cantilever beam.

The total design vertical seismic force is given as

However, declaring these elements as cantilevers, will not affect the analysis results at all, and the cantilevering effect will be taken into account only for design. 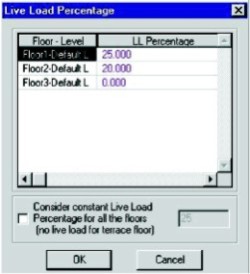 Ductile Detailing in Beams and Columns

STRUDS has the option while deciding the design parameters for this purpose on both beam and column tab. If user has generated the earthquake load and have selected either Plane Frame or Space Frame method for analysis and design, he can select the check box to apply the detailing in beam or column reinforcement as per IS 13920 code. The stirrup spacing and minimum steel criteria as per the code will be complied while providing reinforcement in the columns.

All relevant clauses of IS: 1893(2002) & IS: 13920 are implemented in STRUDS so that a structural engineer can analyze, design and detail a RC building for seismic resistant design. Utmost care is taken for generation of EQ loads and provision of drawings with ductile detailing. Generation of EQ loads is automatic and step by step calculation report brings transparency in analysis and design calculations of STRUDS.