RISA Technologies launched its latest version of RISA- 3D version 7, software package in India. It uses most accelerated Sparse Solver which is 100 time faster than the earlier used Skyline Solver and making RISA-3D the future of structural analysis. RISA-3D V 7 incorporates the new direct analysis methods of AISC 13th Edition. This version allows users to design for either the ASD or LRFD requirements of this new steel code.

RISA-3D V 7 now offers 8-node solid element which opens a whole new range of modeling and analysis possibilities with solid element very easily and faster way it never happened in any other software.

This new element combined with RISA-3D's automatic meshing features opens up a whole new world of modeling and analysis possibilities! 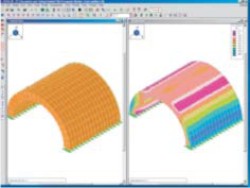 RISA-3D has proved its ability within a short time in India and within a span of year more than 100 licenses have been sold and widely accepted by all major design consultants in India which shows the secrete of becoming the most popular and #1 software in USA. This is really user-friendly and Rapid Interactive Structural Analysis for 3D structures. User friendliness is what makes this award-winning software such a powerful tool for the analysis, design and optimization of all types of structures and all common structural materials. RISA-3D has a very Clean and Comprehensive CAD-like graphic drawing/editing capabilities that let you draw, modify and load elements as well as snap, move, rotate, copy, mirror, scale, split, merge, sub-mesh, delete, apply, etc. It also supports real spreadsheets with cut, paste, fill, math, sort, find, etc and there is a dynamic synchronization between spreadsheets and views so you can edit or view any data in the plotted views or in the spreadsheets.

RISA Technologies has been an established leader in structural analysis and design software since 1987. RISA Technologies' top-rated software tools have helped structural engineers in United States in improving their productivity and work more efficiently.