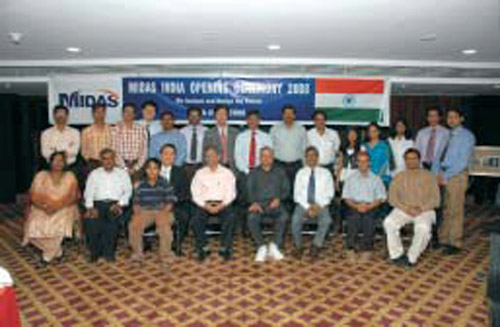 MIDAS India has established a new office in Mumbai, to provide support and to distribute superior technology in India, Southwest Asia and Western Countries. Midas Software developed by the steel giants, Posco Steel & Construction in the year of 1989. Currently MIDAS IT is the largest company in the world, in the field of Computer Added Engineering software development. The state-of- the-art automated engineering solutions of MIDAS IT have proliferated in the Western countries and in the Far East Asia at a very steep rate.

The commemoration ceremony of MIDAS India was held in Mumbai and the professionals from various parts of the country, gathered and celebrated. During the commemoration ceremony, congratulatory greetings were extended by many overseas branches including Midas HQ's CEO, Midas UK, Midas US, Midas Japan etc. Also, encouragement was received from many Midas users in India.

Midas Software was first launched in India during 2003 in partnership with a Softtech Engineers, a Pune based company. Soon after the launch, the inquiries regarding technology support by users increased sharply with the growing user base. Midas India was formed in 2008 to meet the growing need for technical support, and providing sales support superior and cutting edge technology.

Midas India established an R&D Centre to not only provide flawless technology support but also develop functions in the software as per the local practice and request of the customers. Now, a comprehensive and unmatched customer service base has been formed in India.

Representative of Bridge Engineering Support team, Mr. Moorthy said "A good software product is not complete unless there is a technological backup associated with it, which enables the users to use the software with complete awareness. Now, in addition to MIDAS products versatilities one can also experience the smoothness in application because of on time support."

MIDAS IT believes that technology alone can not upgrade the standard of human life, human touch is indispensable. Life must connect to life. The entire amount of the first sale was contributed to a greater need, to the Maharashtra Fellowship of the Deaf (MFD), Pune, an organization that looks after people who are congenitally less privileged.

Mr. Angshuman Pandey, representative of MIDAS India said, "Midas India is not a company that means only business, it thinks far beyond that. MIDAS India's goal is to make its customers feel rewarded and fulfilled as an engineer, as a developer and as a builder of the nation. We also want to contribute to our society. We felt happy by contributing to MFD for the first time, however small may it be, we felt happier by seeing our intension to serve to the society, to the people and we will keep encouraging to the such organizations."