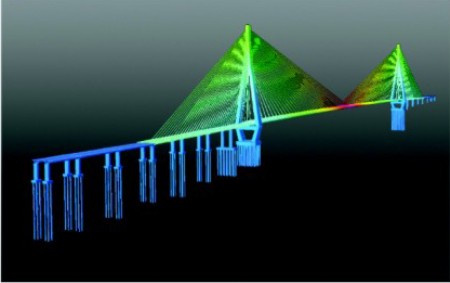 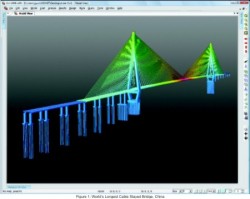 This problem is caused by not understanding the cable theory or by no existence of software taking care of this problem except for the software dealing with large displacement.

For a real design of a cable stayed bridge, connection of key segment and generation of side span supports, temporary bents, temporary rigid link between tower and girder and elastic link between tower and girder, which are the factors affecting the structural behavior, should be included. The forward analysis using Lack of Fit Force should be evaluated on various structural cases in order to be used for a real bridge. Therefore, before we apply forward analysis using LFF to a real bridge, we will verify the applicability of LFF function by performing the forward construction stage analysis for a simplified bridge, which includes key segment closure, boundary condition change during construction stages and installation and removal of temporary bents.

Test Model is a 2D 3-span continuous symmetrical cable stayed bridge. The total bridge length is 170m (40+90+40). The 8 cables are supporting the bridge.

The "Backward Forward" results were obtained like this; first, cable force for each stage was obtained from backward analysis and the cable pretension was introduced as External Type Pretension for forward analysis. To consider the effect of key segment, LFF was applied to the key segment (beam) element.