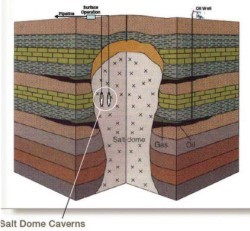 The technique of storing gases other than air in man made cavern has a short history. Gas in nature is safely residing for millions of years under good competent rock. Underground storage of natural gas was first practised in 1915 in North America in converted oil and gas fields. At a later stage, storage space was created by injecting gas into water filled rock formations (aquifers) located below good quality rock. From a first few Liquefied Natural Gas (LNG) installations in caverns without wall protection or ground water control, gradually more efficient storage systems were developed using water curtains and refrigeration. Today’s development in the field of storage of gases in rock caverns is concentrated to efficient small scale Liquefied Petroleum Gas (LPG) storage and to natural gas storage. The main reason to this being safety and public acceptance. But the high vapour pressure of LPG means deep location of the cavern and its stability. However, the complicated and fractured rock formations which are usually encountered while constructing such cavern need careful analysis and design.

The stability of a rock cavern is more or less dependent upon the strength of the rock formation and the state of rock stress around the cavern i.e. the ratio of horizontal to vertical rock stress. The strength of the rock formation is governed by the strength of its discontinuities, joints or bedding planes and never is overlooked while analysing a rock cavern. The paper focuses on the stressdeformation response of a twin tunnel constructed with different diameters at different spacing subjected to different internal pressures through a discontinuum analysis carried out using UDEC. 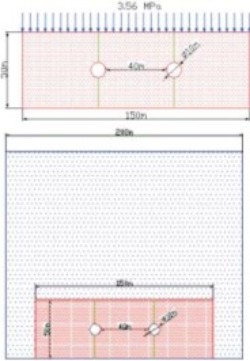 Underground rock cavern petroleum storage facilities are common in many countries worldwide. A variety of petroleum products can be stored in rock caverns, including crude oil, petrol and LPG. Operations of the underground petroleum storage facilities are very similar to storage facilities above ground. The oil is stored underground and the surface land is freed from oil tank farms. The most economical surface storage of LPG requires very large refrigerated tanks.These tanks and their associated plant are costly to build and maintain. The refrigerated tanks also have a finite life of possibly less than 30 years. Underground storage on the other hand is less expensive to build and requires little or no maintenance. The plant associated with the underground storage caverns is relatively simple, easy to maintain and can be easily replaced when worn out. Another big advantage of underground storage is that it does not intrude at all on the surface environment.

LPG has successfully been stored underground in unlined rock caverns for the last three decades.LPG is either stored at nearly atmospheric pressure at low temperatures (refrigerated storage) or pressurised at ambient rock temperature (pressurized storage). The containment of both is controlled by the ground water in the rock fracture network surrounding the cavern. In order to secure containment the storage must be located at a sufficient depth below the ground water surface. Liquefied petroleum gases are a mixture of propane and butane with various compositions and properties. Pure propane may be stored as LPG at –42°C at atmospheric pressure in a fully refrigerated storage. Any temperature increase will induce boiling, which will continue until the pressure reaches a value that matches the vapour pressure curve for propane. In the refrigerated storage, the containment of LPG is secured by the water saturated frozen zone surrounding the caverns and the free water that must be allowed above the 0°- isotherm. If LPG is to be stored in a fully compressed storage, the required pressure, i.e., the required depth below the ground water table is determined by the storage conditions of the product and the ambient rock temperature. Containment must be ensured at all time for economical, safety and environmental reasons and therefore the gas must be stored at pressures below its critical pressures taking into account the influence on geometric factors such as shape, dimensions and number of parallel caverns etc. In general the required location depth for pressurized storage is greater than that of refrigerated.

The storage conditions for natural gas are much more extreme than those for petroleum gases. The gas is either stored at extremely high pressures in the gas phase as compressed natural gas (CNG) or in liquid state as LNG. CNG can be stored in either Lined Rock Caverns (LRC) or in deep, large and water-sealed unlined caverns (hydraulically compensated). The containment principles for the unlined alternative are comparable to the compressed LPG storages. However, in order to increase the storage density and storage volume the gas may be stored in the cavern excavated deep below the ground water table. Alternatively, the gas may be stored in LRCs at more moderate depths. The LRCs may be constructed for pressures up to 200 bar, increasing the density about 200 times, with a rock cover of only 100 to 200 metres. The wall structure of thick steel, concrete and drainage system and its interaction with the bedrock is designed to contain the gas and bear the pressure. Maximum storage pressure is stipulated by the rock mass condition, the deformability and its interaction with the lining system. 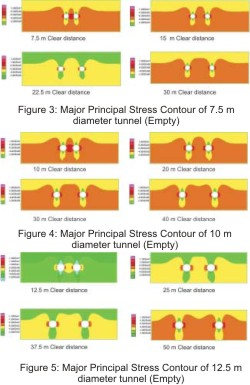 The utilization of underground space offers many benefits as compared to the above ground development. These benefits include but are not limited to the following: The maintenance and operation cost for storing more than 50,000 m3 is low. The cost decreases with increase in storage volume.

A twin circular tunnel of 7.5 m, 10 m and 12.5 m diameters placed at a depth of 150 m spaced at different clear distances varying from 1D to 4D (D – Diameter of the tunnel) has been considered for the analysis. The rock formation is considered to be intact with a single vertical joint passing through the centre of the tunnels. The cavern geometry is shown in Figure 1. 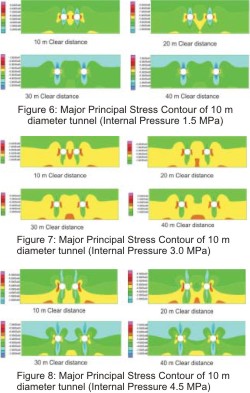 The analysis has been carried out using the Universal Distinct Element Code (UDEC) software which is a two-dimensional numerical program based on the distinct element method for discontinuum modelling. It simulates the response of discontinuous media subjected to either static or dynamic loading. The software is primarily intended for analysis in rock engineering problems, ranging from studies of the progressive failure of rock slopes to evaluations of the influence of rock joints, faults, bedding planes, etc. on underground excavations and rock foundations.

The parametric study on the twin circular tunnel consists of three variables: a) Diameter of the tunnel viz. 7.5 m, 10 m and 12.5 m b) Clear distance between the tunnels viz. 10m, 20m, 30m and 40m c) Internal pressures in the tunnel viz. empty, 1.5 MPa, 3.0 MPa and 4.5 MPa. The effect of clear distance between the tunnels and the effect of increase in internal pressure in the tunnel, on the stress distribution-around the tunnel, at the crown and at the springing levels are analysed. The deformations at these places are also studied.

The stress–deformation response of the twin tunnel system with varying diameters and under different pressure conditions has been the main focus of the present study. The major principal stresses (s1) contours of the empty tunnel of varying diameter are presented in Figures 3 to 5.A critical study of the stress distribution around the tunnel system leads to a general conclusion that as the spacing between the tunnels increases, the stress distribution on the inner and outer side of the tunnel more or less tends to become identical, especially at a spacing of 4D. This implies that when the tunnels are in close proximity to each other there is interference among them which results in unequal stress distribution on both the spring lines. This interference decreases as the spacing among the tunnel increases. The detailed analysis of the pressurized tunnel indicates that with the increases in internal pressure the difference in the measured stresses at the inner and outer spring lines increases, the phenomenon being more pronounced when the tunnel spacing is less. The minor principal stress contours also indicates that there is virtually no interference among the tunnels at a spacing of 4D. Since the response of the tunnel is similar irrespective of the diameter of the tunnel, the major principal stresses contours, Xdisplacements contours and Y – displacement contours of the 10 m diameter tunnel only are presented in this paper as Figures 6 to 14. 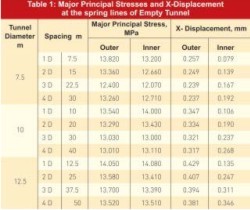 Apart from the stress distribution around the tunnels, another parameter which is an indicator of the influence of tunnels on each other is the deformation at the spring lines and more precisely the deformation in the horizontal direction. The Xdisplacement contours indicate that as the spacing between the tunnels increases, the displacement contours on the inner and outer side of the tunnel more or less tend to become similar both in extent and magnitude. The trend is same in case of empty tunnel and pressurized tunnel. In order to understand this phenomenon more precisely the deformations at both the outer and inner spring lines have been tabulated in Table 1 for case of empty tunnel. 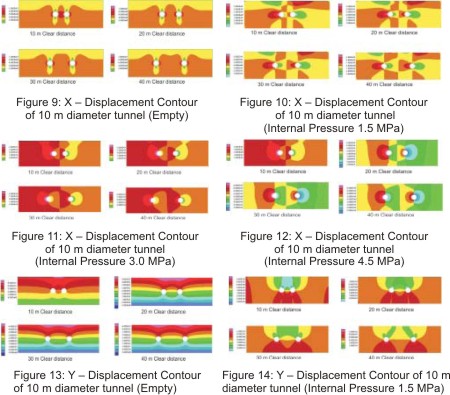 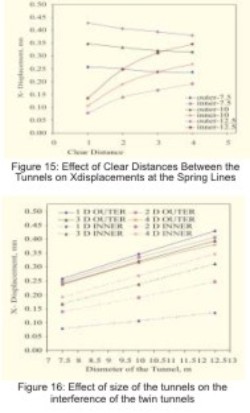 From the analysis of the twin circular tunnels, the following conclusions can be drawn: