Dubai Festival City is expected to revitalize downtown Dubai. Approximately, 14,000 people are currently employed on the Dubai Festival City site, with that number expected to double by the end of the year. By the time this planned community is completed in 2012, an estimated 1.2 million people will live, work, shop, and vacation in this "city within a city."

With more than a dozen project management teams and 100 consulting and contracting firms, the 10-year Dubai Festival City mixeduse project requires intense and astute oversight in order to remain on schedule. The project—one of the largest private developments underway in the world—has 15 project management teams working in parallel. A detailed management structure has been established encompassing five divisions: development; design and construction; marketing and leasing; finance; and human resources. Additionally, special-purpose companies are being established to operate the facilities upon completion. 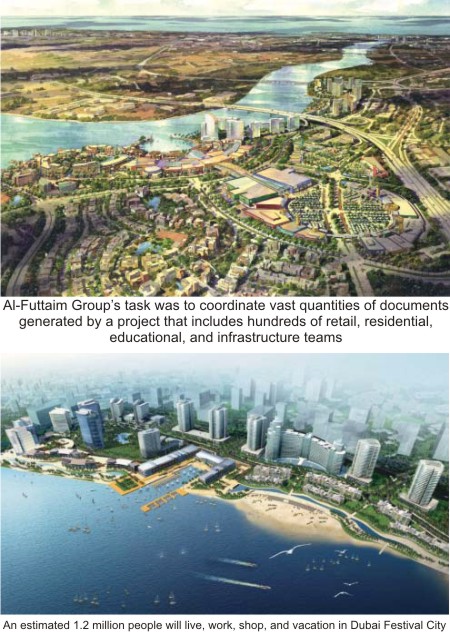 Bentley's Project Wise collaboration system has helped the project teams coordinate the vast quantities of correspondence and other documentation generated by a project of this magnitude. Hundreds of retail, residential, educational, and infrastructure projects have required solid communication and dissemination of ideas among the dozens of architects, engineers, and contractors on the job.

"The core Project Wise product—with some project-specific workflow customizations and configurations—helped Dubai Festival City and its design teams meet the demanding schedules of the design and construction program," explained Robert David, design and construction director for Dubai Festival City. "Without ProjectWise, it would have been significantly more difficult to meet that challenge."

During the construction phase of Dubai Festival City, ProjectWise was initially used as a document management system to control the movement of documents between approximately 200 project stakeholders. It was able to handle an extensive volume of data inhouse, while providing this data to the global stakeholders.

The movement of these documents and the collaborative nature of the workflow that accompanied this movement were largely controlled by a mixture of complex spreadsheets, access databases, and paper forms. The project team recognized that significant benefits could be obtained if some of these construction workflows were added to the ProjectWise environment.

Following a series of Bentleyhosted workshops, a customized software functional specification was produced and priced. The cost of the customization—dubbed the ProjectWise Construction Module by project leaders—was compared with a number of ASP solutions. The results of this exercise proved that the cost of the ProjectWise Construction Module—including the associated wide area network, local area network, and hardware upgrades—was still considerably less than that of the most competitive ASP solution.

The cost was not the only benefit. The module matched the workflow of the construction process far better than any of the other options considered. Moreover, because it was generic, it could be reused on future projects.

Since Dubai Festival City's stakeholders are located around the world, the construction module has been deployed as a standalone Web application that employs ProjectWise for storing various database objects. The application has been developed to reuse existing ProjectWise database objects and, within the construction module, create and manage RFIs, document and drawing submittals, material submittals, and nonconformance reports.

The infrastructure consultants made extensive use of 3D modeling and visualization techniques to design the 16 kilometers of roads and bridges within the Dubai Festival City boundary. This infrastructure data was exported into numerous data formats for the architecture and other design consultants to produce both individual building and sitewide visualization.

Since the implementation of ProjectWise, the project team has managed nearly 1 million documents and drawings—a task that would have been cumbersome without an effective document management plan. "We have notices that by utilizing ProjectWise and the construction module, users spend less time creating and managing the inefficient paper-driven processes, where documents can be misplaced or held up by individuals," said David. "The resulting efficiency gains, transparency, accountability, and audit ability of the system have provided Dubai Festival City and its stakeholders with the ability to become more proactive in their primary functions, rather than spending much of their time chasing papers."

David estimates ProjectWise's return on investment at 21 to 1, with a 5 percent improvement in overall project time savings. "Our managed environment means that we are truly able to 'work as one,'" said David. "On a project of this magnitude, this is a great achievement, with benefits that will reverberate across the entire lifecycle of the project."

Al-Futtaim Group implemented ProjectWise in late 2004 and has been pleased with its efficiency ever since. In fact, it is expected that the ProjectWise collaboration system will become the backbone of all Dubai Festival City operational functions, allowing the project's building financial management, infrastructure management, GIS departments, and command-andcontrol centers to make use of the system's federated content management solutions, including its servers for caching data in multiple locations, for managing and automating plotting and publishing, and for connecting with enterprise systems. "Our intention is to effectively manage all project data throughout the entire lifecycle of Dubai Festival City," said David. "Bentley's products enabled this vision to become a reality."