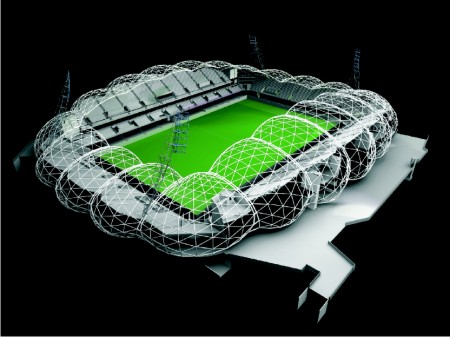 Daunting structural and design challenges faced by a project development team can often lead to innovations that serve as a model for designing future projects. The Melbourne Rectangular Stadium, a $250 million project now under construction, is such a case.

The medium-sized rectangular pitch stadium in Australia, which is expected to be completed by December 2009, will provide the missing link in Melbourne's sporting infrastructure. Designed by Cox Architects, Major Projects Victoria is developing the stadium on behalf of the state government and the Melbourne & Olympic Parks Trust. Grocon Constructors is the builder and Arup is providing the structural and civil engineering design services.

The stadium's innovative cutting-edge bioframe design features a geodesic roof that covers the seating area. The roof will use 50 percent less steel than a typical stadium roof of the same size. Arup chose Generative Components, an associative parametric software application that captures and exploits the critical relationships between design intent and geometry, to develop the design. Generative Components allowed Arup engineers to model the stadium's primary roof structure and to test alternate geometric configurations as well as accommodate the final preset values for fabrication and steel construction.

"To generate the stadium roof geometry, a 3D model of the stadium structure was created using building information modeling (BIM) software," explained John Legge-Wilkinson, Arup CAD leader. "Since the roof geometry was subject to a variety of changes throughout its lifecycle, optimization studies of the stadium roof were undertaken that led to the development of the final geometric and structural design."

The final design analysis model was imported into Bentley Structural and used for project documentation and scheduling, including member schedules containing the member mark, section size, and length for all of the individual members in the roof. A final wireframe model was created in Generative Components, making allowance for the calculated deflection of the structural steelwork members at the lip edge of the roof.

This preset model was passed on to the contractor and used as the primary setout for the roof geometry and for the preparation of the structural steelwork shop detail drawings used for steelwork fabrication. 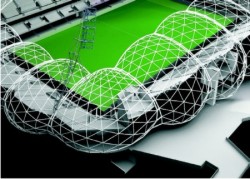 Using GenerativeComponents and Bentley Structural, the Arup team was able to create and rationalize the roof geometry and eliminate errors that might result from manual modeling methods; the ability to quickly regenerate a number of different geometric configurations used for the optimization studies, which yielded a cost-effective and efficient final design; and the ability to measure the total length and surface area of the roof steelwork for comparison between the different geometric combinations used during the optimization studies.