For over the past 30 years, ADAPT's ABI Bridge Software has been a preferred tool for engineers across the world. ABI 2012, the latest generation of the software is exhaustively used for the analysis, design and construction phase support of concrete bridges. Its support for the now mandatory IRC 112-2011 code makes it even more relevant in the Indian market.

Invented by Dr. Bijan Aalami (Founder & Chairman of ADAPT Corporation), ADAPT ABI is one of the first comprehensive bridge design software to be introduced in the global market. Over the past three decades, the software has grown to become a powerful tool in case of the following types of bridges: It is extensively used for mid-size bridges, flyovers, ROBs, Metros/sky trains and various such key segments. In India it is used by various PWDs, Metro Rail Corporations, Railway Divisions, Private Bridge Consultants and leading educational institutions. Its powerful and easy to use features are its core strength.

While the software addresses the mid-sized bridge segment, its powerful features and robust technology has enabled engineers to use it for some global landmark projects such as:

Hunter Expressway Viaducts in New South Wales, Australia consists of three twin bridges with combined length of 1580m. All the internal spans are 75m and end spans vary from 52m to 60m. They are built using precast segmental balanced cantilever method of erection using overhead gantry. Substructure consists of concrete piers with height varying up to 35m above the ground supported by cast-in-situ bored piles and pile caps. The piers are also built using precast concrete segments by post tensioning.

The viaducts have lengths of approximately 330 metres, 255 metres and 200 metres and span lengths of up to 75 metres. There are twin viaducts at each site making a total of six structures. Viaducts have concrete box girder superstructures supported on hollow concrete piers. The decks are 11.5 metres between kerbs. ADAPT's ABI software was used by its clients Hyder Consulting, Australia for the same.

A three span continuous PSC Bridge, the Akhnoor bridge has a total span of 280m. The unique feature of the project was that it has a central span of 160M – one of the longest in India! The Bridge was awarded with the Outstanding Concrete Structure Award 2008 by ICI. 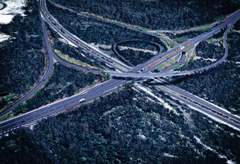 In fact the bridge has various feathers in its cap and is also recognised for the fastest construction of any P.S.C Structure in India for a bridge of 280m length since it was completed in a period of 20 months. It also has the shortest time cycle of 6 days consistently achieved for construction of each segment. The Box Section is largest in India at pier head 9750mm and in the middle is 3825mm. The bridge also has the heaviest bearings ever used in any bridge in India, the total weight of bearings 42mt and maximum capacity 4000 mt.. The Prestressing was done after only 60 hours of casting of each segment. The depth of Girder in the Central Position is 3.4m for 160m span. This has the largest span depth ratio of more than 47. 2 pairs of segments concreted sequentially within 24 hours repeatedly.

ADAPT ABI is popular not only because of its strong technology but also for its user-friendliness. It is built on a robust finite element analysis engine that explicitly models time-dependent aspects of a project's construction phasing and time-dependent material behavior. It is a practical design tool that allows bridge design engineers to quickly and efficiently model their bridge projects and get the analysis results they need - regardless of how simple or complex a project is. The software offers an easy-to-use 3D modeling environment and unlimited flexibility in the modeling of bridge geometries and construction sequences – including temporary structures. ADAPT ABI also includes a Moving Load Module and an Elongation Module

ADAPT ABI is moving from strength to strength each passing day. While in India it is used by government and private clients alike in various key projects such as the upcoming Bramhaputra Bridge project in Assam, it is being used for critical projects across the world too. Engineers find it a cost effective yet powerful tool to support them in key bridge projects across the world.

"We are confident that as the software undergoes further development in the coming years its acceptance and usage will only increase manifold," says Mr. Amit Sahai, VP-Sales & Marketing, ADAPT.