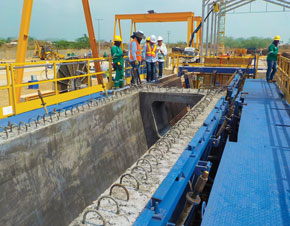 The 40 m mould was installed in the vicinity of the construction site. It can be used independently of location, since it has a self-stressing system.
In many countries around the world, overloaded and outdated highways and roads are holding back economic development. This is the reason why massive investments are being made within the State billion-budget funding program for expanding road infrastructures. The aim is to increase mobility, strengthen the economy and enhance competitiveness. India does not only have such a program available under the "National Highways Development Project" (NHDP) but also numerous other countries are undertaking strong efforts to improve their country's road network and infrastructure.

In Colombia, for example, at the end of last year, the first earth works commenced for the new construction of the road connection between the cities of Cartagena and Barranquilla. This major project, which has been acclaimed by leading politicians in Colombia as an important corner stone for the economic development of the Caribbean coastline of Colombia, will significantly reduce the travelling time between the two cities, besides improving the connections between Colombia's two most important ports.

Tecnocom, a company in the PROGRESS GROUP, which specialises in moulds for special concrete elements, placed the successful bid for supplying a mould system for bridge elements. This mould is currently being used to produce the V girders for the longest bridge in the major project. 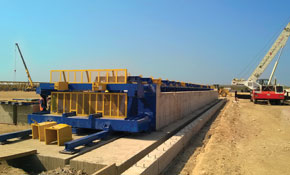 A vibration and heating system ensures steady compaction and curing of the concrete used. V girders in three different lengths, weighing up to 85 t, are currently being produced for the "viaducto Gran Manglar”, the longest road bridge in Colombia.
The figures concerning the "Proyecto Cartagena-Barranquilla y circunvalar de la Prosperidad" are impressive. The new road link on the Caribbean coast in northern Colombia is 146 km long, half of it is designed with two dual carriageways and bridges span coastal lagoons and rivers. A total investment of 1.3 billion dollars has been committed, in order to construct a link meeting international standards between the two mega cities of Cartagena and Barranquilla. The project forms part of an initiative from the Colombian Ministry for Transport and National Agency for Infrastructure. This initiative includes projects to unlock all the important centres in the country by providing them with well-engineered traffic connections. The aim is to increase Colombia's ability to compete.

The longest road bridge
The bridge over the Cartagena coastal lagoon forms an important cornerstone of the new road link between Cartagena and Barranquilla. Designed as a four-lane highway, the viaducto Gran Manglar is intended to span the swampy territory to the north of the city and its 5.4 km length makes it the longest road bridge in Colombia. The general contractor, Rizzani De Eccher from northern Italy was awarded the contract to construct the bridge. This company, which works in the field of residential and infrastructure construction, and which specialises amongst other things, in the planning and construction of bridges, awarded Tecnocom the contract for constructing, producing and assembling a mould for the manufacture of the V girders required. 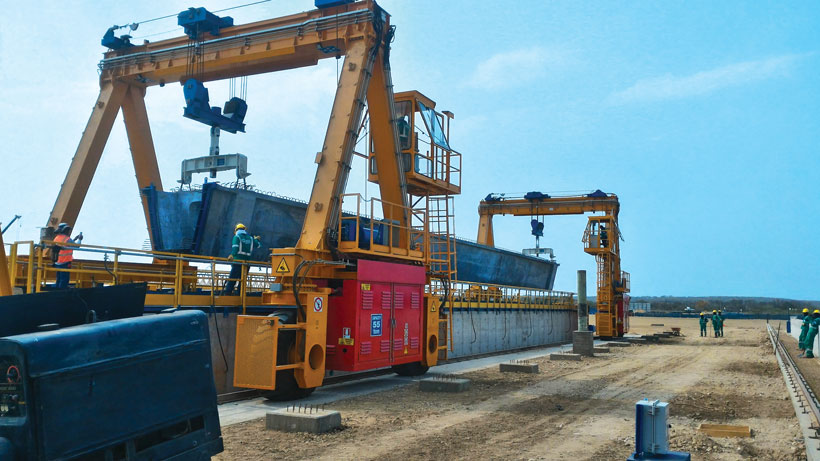 Two gantry cranes load a total of 387 concrete elements on to special HGVs, which transport them to the construction site.

A 40 metre mould for 85 t V girders
The mould was shipped to Colombia at the end of last year. In February 2016, the 40 m long system was accepted. It was installed in the vicinity of the construction site and has since then been producing 31, 32 and 37 m long pre-stressed V girders, weighing up to 85 t. On completion, the elements are loaded by two gantry cranes on to special HGVs and transported to their site of deployment. There, they are assembled and the upper slab is concreted over in preparation for the planned carriageway.

In order to make it possible to manufacture three different lengths, the mould has been equipped with adjustable stop-ends. The mould also has a self-stressing system with a preloaded stress of 1,150 tons. Thanks to this system, it can be used independently of location. When the project is completed the mould can be transported without difficulty and with all the ancillary equipment to other construction sites. The mould is also fitted with a vibration and heating system. All 387 girders required to construct the bridge are scheduled to be manufactured by the end of October.

Tecnocom, which specialises in mould systems for the precast concrete industry, has decades of experience in the construction and manufacture of moulds for bridge elements. All the processes from planning to assembly on site are designed and implemented by in-house specialists. Similar projects have been undertaken in the past in Italy, Portugal, Spain, Greece, and Qatar.