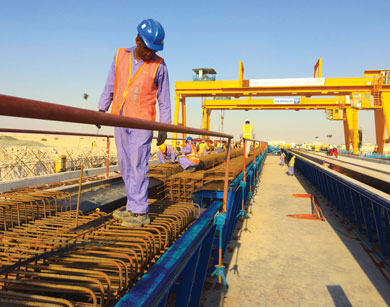 With the 120 m long mould systems, supplied and installed by Tecnocom, V girders upto 37.5 m in length are manufactured for the construction of bridges and underpasses
A major project should relieve the traffic problem in the region around Doha, the capital of Qatar. By the end of 2017, a new motorway link with upto seven carriageways will be cleared for traffic and should become the backbone of the national road system. Tecnocom, part of the PROGRESS GROUP and a specialist in sophisticated mould systems, supplied three moulds for the manufacturing of V girders. These are being used to construct the bridges and underpasses for a section of the major project.

Both the economy and the population of Qatar have been on a higher growth trajectory for some years now. In parallel to this, there has been a steady increase in traffic on the roads, resulting in traffic jams, with negative effects on people and the freight transport. Major infrastructure projects, such as the preparations for the Football World Cup 2022, have added even greater volumes of traffic which is expected to increase even further in the next few years.

New Orbital Highway & Truck Route – backbone of Qatar road network
Keeping this background into consideration, it was decided to construct a new motorway connection between Al Khor in the north of the country and Mesaieed in the south. The project called the New Orbital Highway & Truck Route, links two major industrial towns and ports and at the same time makes it possible to by-pass Doha, the capital city. It will be nothing less than the backbone of the Qatar road network and on its 200 km length, with its 22 motorway junctions and six or seven lanes, it will carry upto 9,500 vehicles per hour and direction. Freight traffic will be directed along each of two separate lanes. The traffic will be on roll by the end of 2017.

Tecnocom's moulds for bridges & underpasses
Qatar split the project into three construction phases. QDVC, a collaboration between the real estate company, Qatari Diar and the construction group, Vinci Construction Grands Projets, was awarded the tender for implementing this contract section. The corresponding motorway section, which by-passes Doha to the west and north, is 48 km-long and comprises seven lanes in each direction and eight motorway junctions. Redco International w.l.l., a construction company and Qatar's largest producer of precast concrete has been entrusted as a subcontractor with the construction of the bridges and underpasses. Redco International resorted once more to a partner, Tecnocom, with which it has worked and commissioned for many years to supply three moulds.


Production of V girders with three 120 m moulds
In November 2015, the three mould systems were finally installed on site at junction 3, near Umm Al Afai. At the end of December 2015, the plant went into operation and since then has been producing V girders for the 23 bridges and underpasses in the project. With the three moulds, which are each 120 m in length, girders of upto 37.5 m in length and 1,800, 1,500, and 1,000 mm in height can be produced. In order to make it possible to manufacture the various lengths, the moulds are fitted with casting separators. In addition, they have foundation anchorage with a preloaded stress of 17,600 kN. When the fresh concrete is poured in, two mobile vibration systems ensure that the concrete is well compacted. At the end of the curing process, the V girders are removed and two gantry cranes are used to take them to storage or to load them on to specialised HGVs, which transport them to the construction site.

Successful partnership
This contract is the result of the long and successful collaboration between Redco International and Tecnocom. Redco was founded in 1982 by His Excellency Sheikh Abdul Rahman Bin Nasser Al Thani and is now one of the leading construction companies in Qatar. Over the years, the manufacturing of precast concrete elements became one of the company's core activities. Today, Redco International produces roof elements, girders, partition walls, and decorative GRC facing panels.