An innovative solution powered by precast concrete could make flooding a thing of the past.
By Mark Crawford 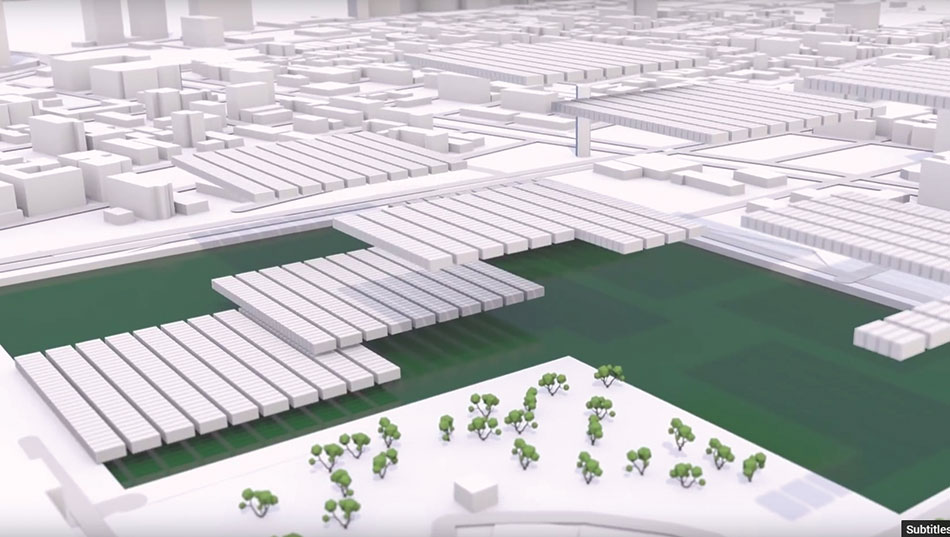 Though Mother Nature is beautiful, she can pack a powerful punch. Flooding and earthquakes, which can destroy communities with little warning, are a constant threat around the world. Climate change and rising sea levels are making flooding more frequent and severe – in fact, some scientists believe that sea levels could rise by six feet or more by 21001. In the U.S. alone, from 1980 to 2016, 26 flooding events totaled more than $110 billion in damages, or $4.3 billion per event2

So what does society do in response? Create expensive barriers? Move to higher ground and abandon coastlines? Simply accept flooding as an act of nature and rebuild, time after time?

Instead, what if a city could rise and float over incoming floodwaters and return intact to its original level after the water recedes?

That’s exactly what Greg Henderson, founder and CEO of Los Gatos, Calif.-based Arx Pax, proposes with his patented SAFE Foundation System. Using the system, a floating community simply rises when flooding strikes or remains stable in the event of an earthquake. The SAFE System improves the resiliency of structures in coastal areas and flood zones by building them over water. 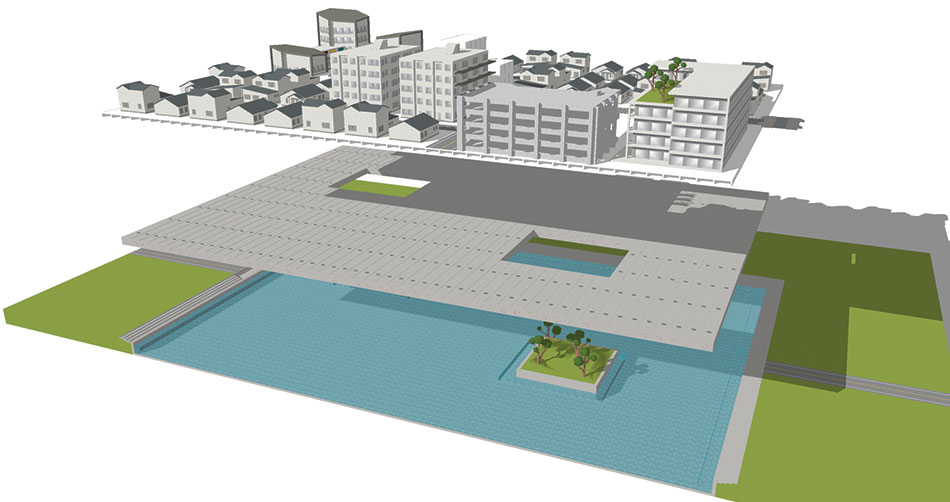 “No matter how green your building is, it’s not sustainable if it cannot withstand an event,” Henderson said. “As an architect and builder, I knew there had to be a way to build more responsibly in areas subject to earthquakes, floods and rising sea levels.”

The SAFE Foundation System isolates destructive forces so they do far less harm. Arx Pax’s patented, three-part foundation system offers a unique combination of architecture and engineering technologies. It is designed to float multistory buildings, roads and utilities in just a few feet of water. Built on precast concrete pontoons, the system is scalable and can support not only homes, but taller commercial buildings covering an area of several city blocks.

During his architectural studies at the University of California, Berkeley, Henderson studied the houseboats in Mission Bay and how they were impervious to earthquakes and floods. This led him to examine Evergreen Point Floating Bridge, which carries Seattle drivers across Lake Washington to the suburbs.

He realized his vision of a floating, self-adjusting environment could draw on the already-proven technologies used to design floating concrete bridges and runways. Evergreen Point Floating Bridge was built on 20 acres of pontoons – 70 of which were recently replaced.

“We are taking everything they have done, all the construction and concrete mix designs, all the same engineering principles, and scaling it down,” Henderson said.

The idea is straightforward:If a flood occurs, the community simply rises. If an earthquake strikes, the buildings are unaffected by the violent shaking of the earth below because the community is floating on a shallow pool of water and is uncoupled from the earth.

The Evergreen Point Floating Bridge, which uses a system similar to the Arx Pax solution, is designed to handle a 20-foot drop in water level. Photo courtesy: Arx Pax Labs

The precast concrete components that line the containment vessel and float the foundation are critical to the success of the system.

“Precast is a fantastic product,” Henderson said. “Whenever you can move a construction process from the field to an indoor site, you improve quality, efficiency and reliability, and reduce costs. A controlled environment is essential for delivering consistent, highly reliable products as well as carrying out secondary operations such as applying epoxy coatings.” 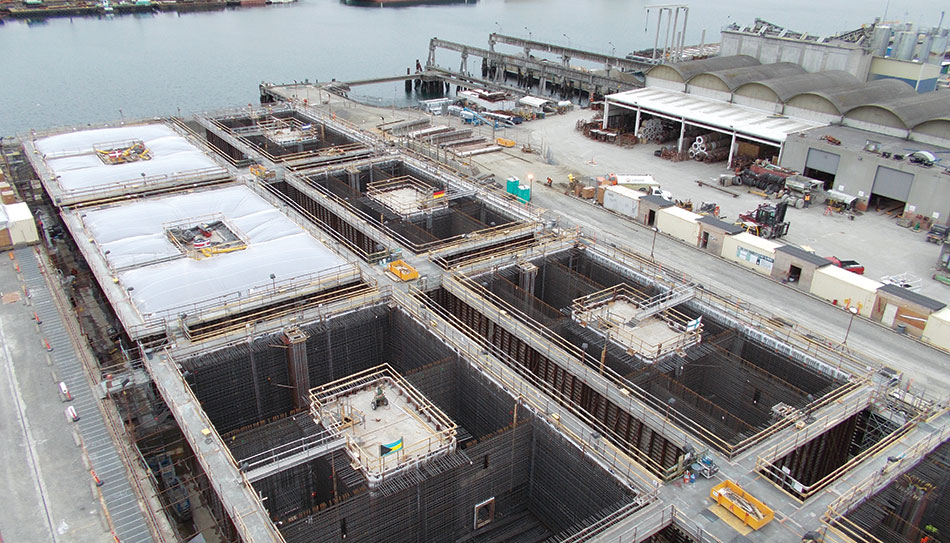 The first step is excavating a 10-foot-deep depression or pool that connects to a nearby river or bay, or fills with groundwater. In order for the containment vessel to respond to the hydraulic forces in the area, the sides and bottom must be permeable. This is accomplished with U-shaped precast blocks that are crib-locked along the walls and interlocked and embedded across the floor. This creates enough permeability so the pool can fill naturally with groundwater or inflow from the tides.

The second step is constructing the floating base. Large, 8-foot-by-20-foot precast concrete pontoons are assembled into groups and locked together to make a broad, stable platform. When completed, the platform will float in about eight feet of water. Tethered securely to the containment vessel, the platform will not drift away during severe flood events.

“We are using exact drawings from the bridge for the pontoons to explain SAFE to building departments,” Henderson said. “The same size, built the same way, anchored the same way. We know it works.

“Once the building officials understand the basic idea, we then present our construction documents that include our precast ‘kit of parts.’”

Henderson added that the SAFE System currently calls for 7,500-psi portland cement, but Arx Pax is experimenting with different mixes to further enhance the solution.

Once the floating construction surface is ready, contractors build the community on top, complete with roads, landscaping and utilities. For added security, the buildings are attached to anchor points on the pontoons. 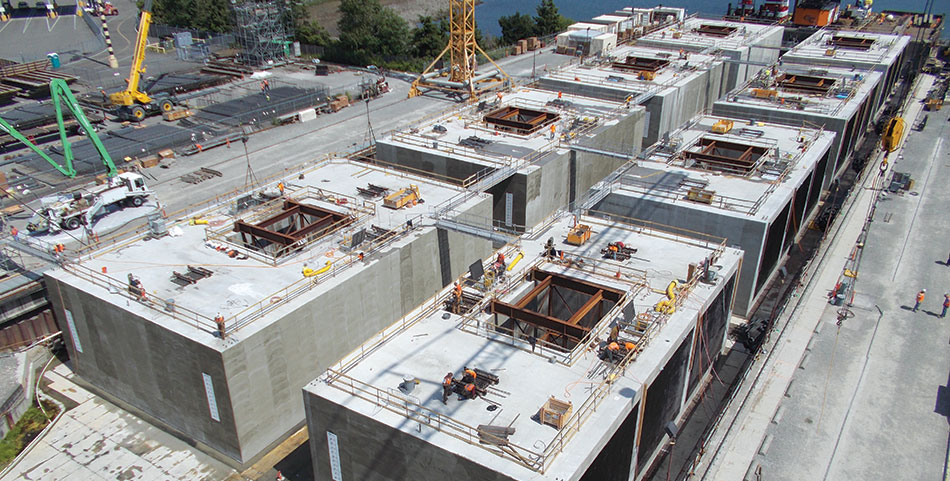 Henderson’s pilot project – a 1.5-acre mixed-use project – is lined up for a flood plain in San Francisco Bay. He’s hopeful the project will be approved in about one year. Once given the green light, construction will take two years. In the meantime, he is busy dealing with technological, regulatory and financial challenges. As funding comes in, he plans to start building high-quality reusable molds for the precast pontoons.

“We want to show everyone that we are intent on improving the process at every step,” he said. “For example, we will determine the minimum wall thickness required for the pontoons, based on mass and amount of water displaced. We are also looking at the possibility of using UHPC (ultra high performance concrete) for its strength, longevity and resistance to seawater.” 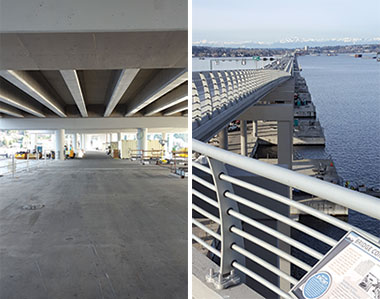 Photo courtesy: Arx Pax Labs
SAFE Foundation System is an eye-opening alternative to the reactive “rebuild and retreat” model. Instead of retreating or rebuilding in the aftermath of a flood, Henderson’s system allows developers and engineers to be proactive in environmentally critical areas. Also, because it is scalable and uses local resources, the system can be set up anywhere flooding occurs.

“We’re helping developers, architects, aid organizations and governments rethink how they can build, rather than just react to disasters,” Henderson said. “We are looking for strategic partners around the world who share this vision. It is important to value-engineer this system and get it out into the world for the people who need it.”

Arx Pax is also considering a pilot project with the Republic of Kiribati – a small, low-lying island nation in the Pacific Ocean that floods every year – to improve the resiliency of its structures. In addition to floating communities, plans could call for floating farms (the country loses considerable farmland due to flooding) that also collect and store rainwater.

The SAFE Foundation System enables more affordable housing and more sustainable construction techniques by separating the buildings, infrastructure and open spaces of communities from destructive natural forces. It is critical to the Arx Pax mission to partner with precast concrete companies that want to be problemsolvers and long-term partners in improving social conditions around the world.

“Every year we see communities, homes and lives destroyed by flooding,” Henderson said. “Instead of spending billions on rebuilding after disasters, we can build responsibly and sustainably so communities will last for generations. High-value projects are now possible in unbuildable areas, creating more opportunities for profitable, resilient communities.

“By working in harmony with natural forces to protect communities, we can provide the next level of sustainability for generations to come.”

Mark Crawford is a Madison, Wis.-based freelance writer who specializes in science, technology and manufacturing.

Acknowledgement: The article has been reproduced from National Precast Concrete Association (http://precast.org/) with its due permission.