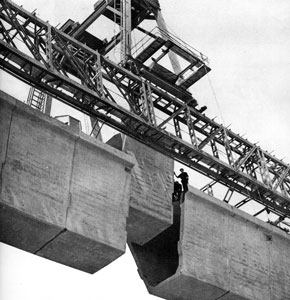 Miguel Fisac. The search for utopia.
Historically, architecture has been related to a technical and artistic duality which is a pulse among these realities which has driven this profession since its beginning. This inseparable relationship must be reinforced by a philosophy which guides the process and allows us to understand it as a whole.

This study has been prepared by a thoughtful reflection, fruit of a doctoral thesis, based on the personal experience of the great architect Mr. Miguel Fisac. Mr. Fisac worked with precast elements creatively and technically while introducing the idea of utopia as an essential ingredient. He created many inventions and held many patents while making a great effort to introduce his ideas into the construction market. His attempts are now studied in the light of history as a creative means to reach the ultimate solution, the ideal piece which provides answers to all construction requirements.

Mr. Miguel Fisac (1917-2006) was one of the most honoured and recognised Spanish architects of his time. His work, however, was connected to universal lines of thought and longings. In 1982, the architect himself explained his efforts in this field before an auditorium filled primarily with engineers interested in precast elements and prestressed concrete similar to what was proposed in the interesting REDECON conference in Bangalore. This occurred at the IX International Congress of the International Federation for Prestressing. There, Fisac showed a series of points which are worth sharing given that they are essential for understanding all his experience in this field. These extracts from his speech will serve as an introduction to his vision and work philosophy as well as help to understand his experience in the field of precasting concrete pieces for buildings developed here.

Conception and Construction of Buildings from the Point of View of the Architect1. Congress of the International Federation for Prestressing in Stockholm in 1982. Published in the Proceedings of the Ninth Congress of the Fédération Internationale de la Précontrainte. STOCKHOLM 10 June 1982. Volume 1. Seminar Papers. Fédération Internationale de la Précontrainte. 1(Transcription of the talk given by Miguel Fisac in the IX International Congress of the International Federation for Prestressing which took place in Stockholm between the 6th and 10th of June, 1982. His talk opened the section dedicated to building and immediately followed the intervention of Leonhardt on "Prevention of deterioration in bridges (prestressed)". The congress included vital speeches by Hillerbork and Virloguex, among others, and a description of Spanish bridges by Barrios de Luna (today Fernández Casado) and Sancho el Mayor. Source: Luis Albajar.)