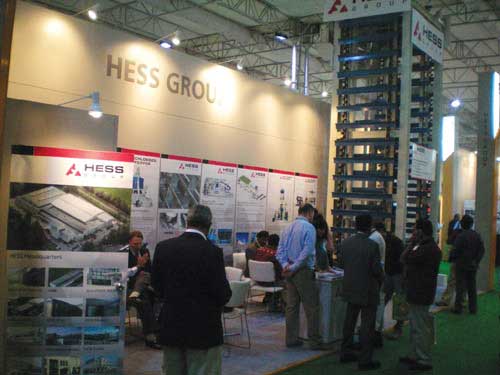 Mr Ralf Beier, CEO Hess Group appeared to be quite delighted about the response from Indian market where the Group has successfully installed a number of Hess-based plants in a short period of time since commencement of its business in India. Hess products and services are serving the construction producer market from concrete blocks, interlocking pavers, tiles, curbstones, retaining walls, fly-ash bricks, autoclaved aerated concrete (AAC) up to steel slag utilization. All important Hess global production lines are available to the Indiamarket, he added.

Further he said that Group market share is set to grow and he is satisfied with this positive response, Hess is in the process of setting up its manufacturing facility in India and it is expected to be ready by the end of 2011. Mr Beier confirmed the importance of the Indian market to the Hess Group and that having an own setup in India is a following the philosophy of the company. Hess has always invested in strategic markets in order to realize the cost advantage of local production, hereby saving transport costs and import duties. The first locally made machinery was shown at the bcIndia exhibition in Mumbai. A further important reason for Hess to be present in India is to be close to its customers. For this reason Hess is also planning to set up service locations around the country. Hereby Hess is able to provide its customers with fast and competent after-sales service.

He informed that Hess assignments in India include commissioning a big RH1500 plant with mixer and automatic handling for Ecologic in North India. The Group is also doing two major flyash based AAC projects for UltraTech and has recently commissioned pipe machine in Nasik. At present, we are doing the installation of wet press system for a client in Kerala. Two further orders have been placed for RH-2000 fly-ash brick production plants that are due for installation before the middle of the year. The Group is expecting a few more projects in the next quarter and at least half a dozen projects are in the pipe line at final discussion stage.

We are at it to promote Resource Efficient Construction products using mechanized operations, but creating awareness about has been a major challenge. These products have a number of advantages over conventional building products in terms of faster construction, eco-friendly, material and energy conservation, benefits which ultimately benefit the users in terms of living quality and expense. Hess extensive production programme and application of future technology concepts are today globally well-known and the foundation for further expansion in India and the introduction of such technology to the country have been laid, he added.