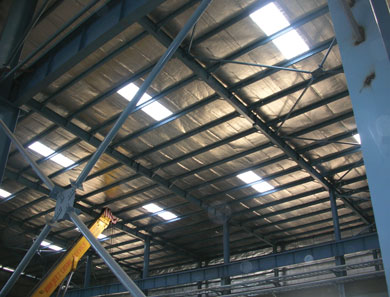 INSUshield - a non-fibrous, fire retardant, closed-cell, tri-dimensional chemically cross-linked polyethylene foam suitable for AC duct insulation, underdeck insulation, pipeline, and acoustic flooring. As it is more than 90% closed-cell, there is negligible water/moisture absorption. INSUshield is chemically inert, thus providing resistance to chemical attack. Prolonged exposure to extreme operating temperatures will not have any impact on INSUshield, as it performs well in wide operating temperature range from -40°C to + 80°C.

INSUreflector is a radiant heat reflective insulation material made of polyethylene Air Bubble Film (ABF) laminated with aluminium foil on one or both sides. INSUreflector is a low e-reflective insulation material with a low mass to air ratio, which effectively blocks the radiant heat transfer. Its air bubbled polyethylene film has a quality of slow reaction against the temperature variation and also acts very slowly for transmitting thermal heat due to its closed air bubble. At the same time, aluminium foil on the other side acts as a reflective material and reflects 96–99% infra-red radiation received by the surface of the heated slated roof. Together aluminium and polyethylene film also act as a moisture-barrier and builds odourless atmosphere inside the process room.

Both INSUshield and INSUreflector are certified 'Class O' in Fire Propagation and 'Class 1' in Surface Spread of Flame as per BS 476 Part 6 & Part 7, respectively. Both are widely used as insulation material and are proven to be very cost-effective.

Steel in vogue for highrise buildings

There is no doubt looking at the way the population density particularly in metro cities, horizontal construction has been put on restriction, and comfortably spread out real estate is hard to find. Lack of space

Heavy Steel Structure and large infrastructure projects hold nearly 20% share of the infrastructure work that is taking place in our country currently. Indian engineering industry has witnessed an extraordinary