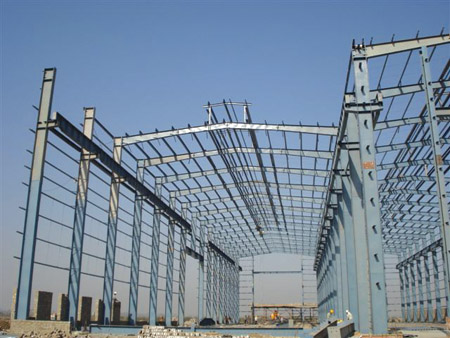 Technological improvement over the year has contributed immensely to the enhancement of quality of life through various new products and services. One such revolution was the pre–engineered buildings. Though its origin can be traced back to 1960's, its potential has been felt only during the recent years.

An estimated 70% of all new commercial buildings in the US are pre-engineered! There is really no dispute in the fact that pre-engineered building systems are the new wave in construction.

Definition
"Pre-engineered steel buildings" are those which are fully fabricated in the factory after designing, shipped to site in CKD(completely knocked down) condition; and all components are assembled and erected at site with nut-bolts, thereby reducing the time of completion.

Pre–engineered means, generally speaking, is any part of a structure that is manufactured prior to its arrival on the building site. The concept of the pre-engineered building (PEB) is one where the fabrication is completed in a controlled environment with the latest technology, and then subsequent erection is carried out.

Though initially only off the shelf products were available in these configurations aided by the technological development tailor made solutions are also made using this technology in very short durations.

The designs were ready-made but the building components were either ready-made or manufactured against specific orders. These buildings were pre-designed or 'pre-engineered' into standard sizes, spans, bays and heights, and use standard details for fixing cladding, roofing, gutters, flashing, windows, doors etc taking advantage of industrial practices of mass production of components economically.

Although PEB systems are extensively used in industrial and many other nonresidential constructions worldwide, it is relatively a new concept in India. These concepts were introduced to the Indian markets in the late 1990's with the opening up of the economy; and a number of multi–nationals setting up their projects. The current pre–engineered steel building manufacturing capacity is 6.0 lac ton per annum. The industry is growing at the compound rate of 25 to 30%.

With respect to design of the structure and aesthetic appearance India is way behind. Indian manufacturers are trying to catch up; comparatively PEB is a new concept in India.

A healthy trend in the form of growth in demand for construction works in residential, Commercial, Institutional industrual and infrastructure sectors are being seen over the past decade. Modern Structures are much more complex and sophisticated as compared to earlier period. One of the major changes which are being felt by all is that the present structures are taller and thinner. Modern day requirement of structures is that these should be lighter yet not compromising on functionality. Civil engineering construction has seen a continual economic competition between steel, concrete and other construction materials.

Currently, the total steel production in the country is about 45Mn Ton against 1280Mn ton of world. Per capita steel consumption in India is 42kg whereas it is 270kg in China. About 10% of steel goes to the construction industry and amidst it PEB accounts only for the 0.5Mn ton. As on date. In the next 5 years, the steel production will be doubled and with efforts of organisations like BIS and INSDAG, steel intensive construction may rise up to 22Mn ton. Owing to advantages of PEB, several non-conventional segments are also getting attracted to use PEB and the potential will rise up to 2.2Mn ton which is four to five times of today's scenario.

Subsequent paragraphs are only a humble attempt to present the various aspects of conceptual development, technology of design and manufacture; and future growth aspects of Pre–engineered building Industry in India along with its grey areas.

PV Rao, Director, Pennar Industries, Hyderabad, elaborates on the concept of Pre‐Engineered Steel Buildings and their advantages over conventional buildings. The pre-engineered building technology, which entered the Indian construction

Steel in vogue for highrise buildings

There is no doubt looking at the way the population density particularly in metro cities, horizontal construction has been put on restriction, and comfortably spread out real estate is hard to find. Lack of space