Cold Formed Steel is a product made by rolling steel or pressing steel in to semi-finished or finished goods at relatively low temperatures. Manufacturing of Cold Formed Steel (CFS) occurs at room temperature. In present scenario the use of CFS system is significantly increasing in countries where traditional structural solutions have always dominated the construction sector. This is mainly due to the developing and increasing technical, structural and economic competitiveness of such systems. The advantages with CFS are lightness of systems, high quality of end products, flexibility due to wide variety of shapes and section dimensions, short execution time due to dry constructions and minimization of environmental impacts due to the possibility to reuse the elements at the end of the life cycle. This paper presents the importance of CFS in various structural elements to mitigate the damage cost to these elements during earthquakes. These elements are investigated for seismic resistance in multi storey moment frames, factors like premature local buckling and low out of plain stiffeners known as the main structural deficiencies of CFS with thin walled elements hence in structures with CFS as the main load bearing components there is less energy dissipation due the above mention deficiencies. Therefore in order to improve the energy dissipation of CFS, an innovative CFS beam with curved flange was developed. The main aim of beam was to produce plastic moment due to large width thickness ratios of thin walled elements of CFS section; development of plastic moment was avoided. To overcome these limitations, the CFS elements were introduced with flange bends in C section leading to a curved flange section. Also modification like flange lips, introducing intermediate flange stiffeners and increasing the number of flange bends results in increase in moment resistance, ductility capacity and initial stiffness. Steel sheeted CFS using gypsum board claddings with different configuration on shear walls and partition walls on either or both sides resulted in increased of lateral stiffeners; shear strength and energy dissipation capacity. Use of MLC (Modular Light weight Cold Form beams) are designed to prevent early buckling phenomena that could affect the structural behaviour when thin sheets are used also provide high resistance to torsional flexural buckling.

The use of Cold-Formed Steel system is significantly increasing in the countries where traditional structural solutions have always dominated the construction sector. This is due to recognized technical, structural and economic competitiveness of such systems. The CFS members obtained by cold rolling are produced by pressing or bending steel sheaths with thickness ranging between 0.4-0.7mm. These members provide several advantages such as lightness of structural systems, high quality of end products, flexibility due to wide variety of shapes and sectional dimensions, short execution period and minimization of environmental impacts.

In steel structures located in seismic area, factors like premature local buckling and low out of plain stiffness are regarded as main structural deficiencies. The use of Cold-Formed Steel structural systems in such area improves the energy dissipation property of the structure which accounts for the seismic resistance. These sections have a high potential for premature failures because of their thin walled nature. To reduce the chances of failures ample ductility should be imparted to the sections.

Experimental investigation on the use of thin walled cold-formed sections as energy dissipative elements for earthquake resistant moment frame for multi-storey buildings were carried out. In multi-story moment frames use of CFS often led to premature local buckling and low out of plane stiffness. To overcome these deficiencies the following experimental investigation was carried out. The tests were performed on 6 bolted beams to column connections with two different beam thicknesses 3mm and 4mm respectively. The test involved step-by-step development curved flange sections and beams with different types out of plane stiffeners in the connection region; the three configurations of the stiffener connections being: without stiffener, minimum stiffener and optimum stiffener. The test specimens were subjected to cyclic loading through hinge connections at the beam end. From the results obtained through the experiment it as concluded that:

In order to control rocking behaviour of cold formed steel in multi-storey shear walls an innovative damage control system was proposed. The system involved hold-down equipped with a fuse function and was placed on the foundation of multi-storey shear walls. This HDF (hold-down fuse) reduces the damage to both structural and non-structural members in the cold-formed steel buildings.

Two steel shear walls were set parallel to the shake direction. Figure shows the controlled-rocking system with multi-storey shear walls for cold-formed fuse frames. In this system, a fuse made of a steel plate which was placed between the racking frames and the foundation. It was connected to a channel of the upper frame and an anchor bolt supported by the foundation. In conventional cold-formed steel structures a frame is rigidly connected to the foundation by steel hold-downs. Therefore the building dissipates the earthquake energy mainly through plastic deformation of shear walls or bracing members in upper frames. Whereas, the newly proposed HDF’s dissipate most of the seismic energy and as a result member and walls within the frame sustain less damage.

Several investigators have tested CFS shear walls for static cyclic loadings and the results were evaluated. But, there is very limited literature available for the performance of CFS shear walls under dynamic loadings. To account for this, a shake table test of a full scale two storey single bay structure was conducted. They were separated by 3.9m centre to centre in the out of plane direction.

The shear panel was 2.8m wide and the storey height was 3m. Both the storeys were identical but the bottom storey was subjected to greater loads. The exterior columns were built-up by channel sections and were welded to the steel anchors and bolted to the slab.

The slab was a heavy reinforced one, 200mm thick and 4.40mm2 in area weighing 93kN. This slab acted as a rigid diaphragm. The specimen design was done considering the location of Seattle, Washington using the data guidelines from TI 809-07 (III). The seismic base shear for the shake table was estimated to be 96.1kN per frame. However the frames were designed for a base shear of 96.4kN each. Shake table specimen was instrumented with accelerometers, displacement gauges and strain gauges.

Through the test results it was seen that the thin steel straps used a cross bracing in CFS buildings are very tough and ductile. After the local buckling, the CFS built-up exterior columns performed well. The columns contribution to the shear capacity of structure was minimum but dependable throughout earth-quake simulation. When the bracings failed to provide strength and stiffness to the earth-quake responses, the columns provided energy dissipation.

The CFS structure provided to be a very affective and dependable structural system for seismic loads and provide the bracing member is prevented from fracture.

Experiments are carried out to investigate the seismic response of steel sheathed CFS shear walls using gypsum and fibre cement board claddings. The experiment was carried out on six such specimens of various configurations and was tested under cyclic loading. With the introduction of claddings, it imposed additional forces on the members in the load path towards the foundation which resulted in the increases of shear strength of walls. Also use of single and double sided steel sheathing on CFS shear walls increased their shear strength and energy dissipation capacity. It was concluded that the shear strength and secant stiffness of CFS steel sheathed walls can be increased by 30% to 32% for single sided and 61% to 80% for double sided claddidng. 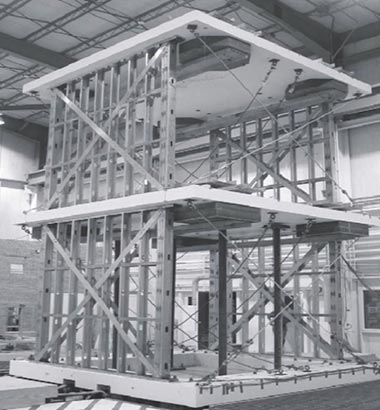 Figure 5: Experimental Set-up
Use of CFS products are important and effective in the constructions carried out especially in seismic areas; lightweight structural systems, high quality end products, flexibility, short execution period, minimum impacts on the environment are some of the important properties of CFS systems which make them suitable for seismic areas.

CFS systems are under research and some of the research works discussed above yield the following conclusions:

Tubular Construction is one of the latest technologies and is growing rapidly. APL Apollo is the first company in India to produce ready square box sections of 500x500mm and 20mm thickness, which make tubular construction faster, better, and more

PV Rao, Director, Pennar Industries, Hyderabad, elaborates on the concept of Pre‐Engineered Steel Buildings and their advantages over conventional buildings. The pre-engineered building technology, which entered the Indian construction