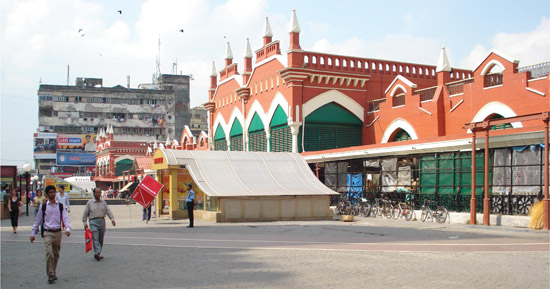 Kolkata, formerly known as Calcutta, is India's fourth largest city, a famous historic landmark, and the capital of West Bengal state. A period of economic stagnation followed the country's independence decades ago but has been replaced by a boom engendering rapid growth in all domains, including road traffic. The population of the eastern Indian mega-city currently exceeds 15 million. 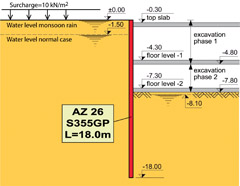 Several construction stages were considered when designing the sheet pile wall
Part of the city's expansion included a new underground shopping mall with integral car park, to be built in the middle of dense urban development. It consists of a shopping mall at level-1 and the country's first car park equipped with an automated parking system at level-2. It is located right next to the red-brick New Market heritage structure on Lindsey Street, famous for its fabulous clock tower. The two 4,000m2 underground levels were built with the top-down method. The basement was surrounded with a sheet pile wall, these prefabricated interlocking elements being the fastest and most economical construction alternative for the underground structure. The shopping mall was officially inaugurated after a construction time of four years. The car park has since then attracted a lot of attention due to its efficient storage system featuring fully computerised pallets moving up to 280 cars to their designated parking slots.

The construction of the shopping mall and car park was launched with a soil investigation carried out by local companies Geotest and Drillers & Engineers. Special attention had to be paid to the groundwater levels that regularly rise from their habitual elevation of 1.5 m below ground level to El. 0.0 m or higher during the monsoon season. 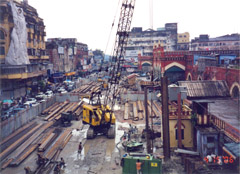 Steel sheet piles are a preferred choice for construction sites in confined spaces
ArcelorMittal's technical department submitted a preliminary sheet pile wall design to the owner. The sheet piles act purely as a retaining wall. The vertical loads of the concrete upper deck are carried by a separate foundation system. As the structure was built with the top-down method, the concrete decks at El. -0.3 m and El. -4.3 m and the bottom slab at El. -7.3 m act as struts transmitting the horizontal reactions of the retaining wall. The prime advantage of the top-down system, namely quick covering up of the construction area, was important as the square above the construction was soon to be reopened to the public. 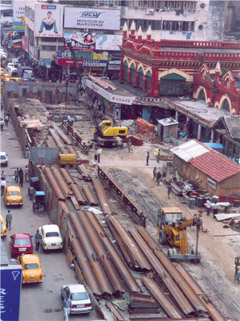 The perimeter wall of the carpark was built with 628 AZ 26 sheet piles
The preliminary design was carried out in accordance with EC 3 theories : comparison of existing and maximum allowable steel stress as the main criteria for choosing the sheet pile sections. Partial safety factors were not considered however, and the result of the design was judged against a minimal global safety factor of 1.50. The influence of water pressure due to seepage under the sheet pile wall was taken into account by setting up water pressure diagrams determined with hydraulic gradients. The steel stress verification was done for the following four construction phases as well as for the final stage considering a loss of steel thickness due to corrosion after a lifetime of 50 years. 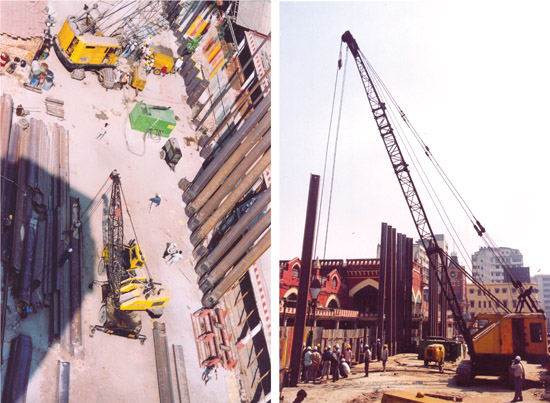 The highest bending moment (465 kNm/m) and deflections (63 mm) occur during phase 4. The technical department proposed an 18 m long AZ 26 sheet pile in steel grade S 355 GP as a suitable profile. The steel stress verification of the AZ 26 characterised by a section modulus of 2,600 cm3/m showed an existing stress of 179 N/mm2. The allowable stress amounts to 355 N/mm2, resulting in a safety factor of 2.0.

The verification after an assumed lifetime of 50 years is based on the loss of steel thickness due to corrosion given by tables in EC 3. As the inner side of the basement structure is coated, loss of thickness had to be considered only on the outer side. A loss of 1.75 mm was determined assuming the presence of aggressive natural soil. The recalculated reduced section modulus of the AZ 26 sheet pile due to corrosion was 2.300 cm3/m. The safety factor following a half-century's exposure to aggressive natural soil thus amounts to 1.76. 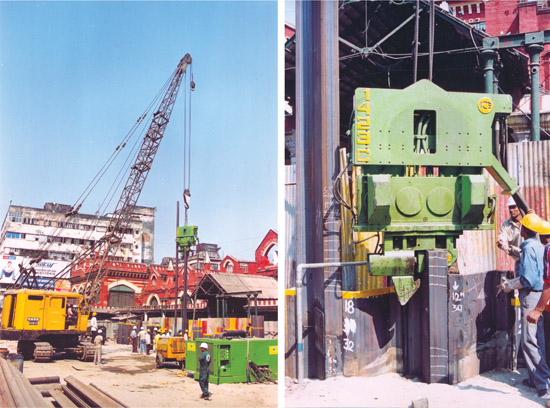 The sheet piles were installed with a resonance-free vibratory hammer

The owner of the project eventually opted for AZ 26 sheet piles in 6 and 12 m lengths to allow shipment in containers. The piles were spliced on the job site. Some 1,110 tons of 18-m-long AZ 26 single piles in steel grade S 355 GP were installed. C 9, C 14 and Omega 18 connectors were used to join the piles at the corners of the wall. The AZ 26s were driven with a resonance-free vibratory hammer suspended from a crawler crane. They form a 167-m-long parallelogram with a width of 15 to 27 m and a perimeter of about 376 m. The vertical loads of the superstructure are carried by 500-mm-diameter concrete columns.

The side of the AZ piles facing the shopping mall and car park was coated for aesthetic reasons. Kolkata's first fully automatic car park was made watertight by seal-welding the Larssen interlocks of the AZ 26 sheet piles. A fire analysis showed that fire protection could be assured by an ordinary sprinkler system.

Getzner’s Acoustic Floor Mats and anti-vibration mountings for walls and ceilings used at India’s iconic Exhibition and Convention Centre IECC are protecting visitors from vibrations and structure-borne noise. The IECC will host the G-20 Summit in 2023, with

The beginning of civilization as we know it, started with a series of material innovations; the Bronze Age and the Iron Age set us on the path to where we are now. Skyscrapers would have never reached such heights without developments in steel

Liberty: Why One Needs ESD Footwear in Electrical Environments

Wearing static dissipative footwear (ESD) is the best way to protect feet against hazards when working in electrical environments. The footwear is designed with a high level of resistance to protect them from electric shocks. ESD work shoes reduce the amount

From researching, manufacturing to marketing, and from producing magnetic units to finished products, Taiwan-based Magtech Magnetic Products Corp (MMPC) is positioned as one of the most reputed and reliable partners in the magnetic field

Da Jie Electricity Machinery Industrial Co. Ltd has lined up strategic business plans for the Indian market where it aims to provide high quality, efficient, and cost-effective products through its channel partners

Air to Water Generation is a Reality

Air-to-Water Generation (AWG) technology is real; in fact, we have devoted our life and work - separating moisture, and drinking water, from air – and are set to enter Indian markets – both consumer and institutional

Ageing of safety shoes is an entirely normal process. To benefit from all the positive properties of a safety shoe, one must be aware of the limited product life of shoes. Ageing happens because the PU sole material is subject to

More and more countries are embracing the mandatory safety shoes standards in order to guarantee protection at the workplace and are creating awareness on the importance of wearing safety shoes at work. Liberty’s Warrior brand of boots

For a construction worker, the most important safety equipment is probably “a good pair of working shoes”. This, in fact, is a necessity as he is on his feet for long hours of the day and even at night, and quite often in dangerous site conditions such

The Warrior brand from the house of Liberty is an acclaimed name in the construction industry for safety shoes. Designed to ensure utmost safety against extreme odds and to facilitate comfort during work, the Warrior work

In today’s world of increasing attention to green and sustainable products, materials and solutions, the colour of the earth wire is also usually green. But has the earthing electrode been upgraded to a truly ‘green’ product

Bangalore-based Kaveri Ultra Polymers has been manufacturing polymer industrial products for use in material handling plants and other engineering industries for more than four decades. The company also has

The new Utkarsh logo is a demonstration of the different sectors the company has ventured into viz. polymer pipes and fittings, transmission and telecom towers, poles and masts for lighting

Design and Construction of Parking Structures

With urbanization and popularity of the automobile, parking structures have become a necessity throughout the world. Over 2000-3000 new automobiles are being added per week on the roads for cities

GICMAR offers specially made training modules and courses, designed and taught by industry stalwarts with live case studies to broaden the horizon of engineers and FCM. Well, this global institute

Skilled manpower and knowledge are key factors for the economic and social growth of any country. India is the second largest English-speaking nation with a strong base of middle class consumers. Its biggest strength is that it is a young