Introduction – to Earth Leakage and the Need to Protect Against it 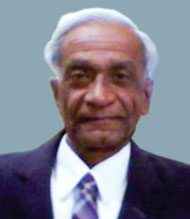 L. B. Sinha, G.M.(Training & Audit), ASK-EHS Engineering & Consultants Pvt. Ltd., Surat, Gujarat.
In the context of electricity, for its proper conservation, right distribution to the desired points of utility and also to safeguard the precious life and valuable property from damage, it is very important to insulate the point of voltage and the passage of electric current through the conductor. Every student and user of electricity must clearly understand and appreciate the importance and role of sound insulation which guides the correct passage of electricity through desired conductor. Any leakage of current, besides being a loss of electrical energy, may be a potential danger to lives of human beings and cattle flock, examples of which we find in plenty in day-to-day life. Large animals, besides human beings, lose their lives due to electrocution when a very small amount of current, in the order of milli-Amperes, flows through their bodies on account of leakage of current from the potential point.

Human safety is the worst victim in case of weakening of insulation because the deteriorated strength of insulation brings harmful potential close to the human body, increasing the chances of flow of intolerable extent of current. This is in brief, the perspective of electrical leakage due to deterioration in fortification of electric power with network of varieties of insulating materials and gadgets. 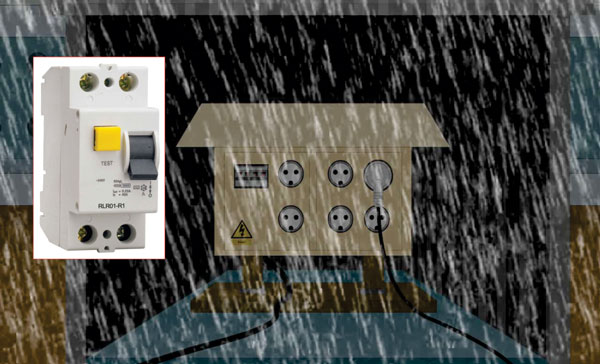 It must be clearly understood and always born in mind that earth leakage protection device is not the surest way of saving human life. As can be seen from the analysis of the subject electrical network, there may be many instances and situations wherein man can be subjected to harmful voltage, in spite of ELCB being in place and active in operation. Hence, the need to be realistic and away from the false notion that we are always safe with the use of ELCB.

A body resistance model would indicate approximately 1,000 Ω from hand to hand, or about 1,100 Ω from hand to foot. It is believed that the greatest number of injurious shocks involve a current pathway that is either hand to hand or hand to feet, because the vital parts such as heart and lungs encounter the flow of current.

A correctly chosen and designed ELCB which can detect small currents of the order of 0- 10 m A flowing to earth can reduce the risk of electrocution. Effect of electric current through human body has been well researched and following chart summarizes the results.

Limitations of ELCBs from practical point of view

An earth leakage circuit breaker cannot remove all risks of electric shock or fire. In particular, an ELCB alone will not detect overload conditions, phase to neutral short circuits or phase-to-phase short circuits. Over-current protection (fuse or circuit breaker) must be provided. Circuit breakers that combine the functions of an ELCB with overcurrent protection respond to both types of fault. These are known as Residual- Current Circuit Breaker with Overcurrent protection (RCB0s), and are available in 1, 2, 3 and 4 pole configurations. RCBOs will typically have separate circuits for detecting current imbalance and for overload current but will have a common interrupting mechanism.

The safety level at which the leakage current can pass through the human body without severe shock or injury is estimated to be 5 ±1milli-Amperes with a duration of less than 1/40 seconds (i.e. 25 milli-seconds). Suppose leakage current is 30 mA, in this case an Indian made 30 mA ELCB easily senses the current and is tripped and supply to load is interrupted. 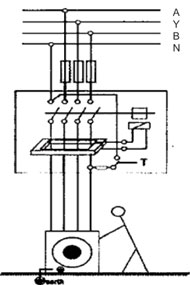 The ELCB works on the current balance principle. The supply conductors, i.e. the phases and the neutral, are passed through a torroid and form the primary windings of a current transformer. Its secondary winding is connected to a highly sensitive electromagnetic trip relay, which operates the trip mechanism. In a healthy circuit, sum of the currents in phases, is equal to the current in the neutral and the vector sum of all currents is equal to zero. If there is any insulation fault in the current and leakage current flows to earth, the currents do not balance and their vector sum is not equal to zero. This imbalance is detected by the core balanced current transformer, the ELCB is tripped and supply to load is interrupted. The trip mechanism is operated at a residual current between 50-100% of its rated tripping current.

In the United States, the National Electrical Code, requires GFCI devices intended to protect people to interrupt the circuit if the leakage current exceeds a range of 4-6 mA of current (the trip setting is typically 5 mA) within 25 milliseconds. GFCI devices which protect equipment (not people) are allowed to trip as high as 30 mA of current. In Europe, the commonly used RCDs have trip currents of 10-300 mA for machine and fire protection.

RCDs with trip currents as high as 500 mA are sometimes deployed in environments (such as computing centers) where a lower threshold would carry an unacceptable risk of accidental trips. These high-current RCDs serve more as an additional fire-safety protection than as an effective protection against the risks of electrical shocks.

In some countries, two-wire (ungrounded) outlets may be replaced with three-wire GFCIs to protect against electrocution, and a grounding wire does not need to be supplied to that GFCI, but the outlet must be tagged as such. The GFCI manufacturers provide tags for the appropriate installation description.

The photograph depicts the internal mechanism of an Earth Leakage Circuit Breaker (ELCB). The device pictured is designed to be wired in-line in an appliance flex. It is rated to carry a maximum current of 13 amperes and is designed to trip on a leakage current of 30 mA. This is an active ELCB; that is, it doesn't latch mechanically and therefore trips out on power failure, a useful feature for equipment that could be dangerous on unexpected re-energisation.

The sense coil (6) is a differential current transformer which surrounds (but is not electrically connected to) the live and neutral conductors. In normal operation, all the current down the live conductor returns up the neutral conductor. The currents in the two conductors are therefore equal and opposite and cancel each other out.

Any fault to earth, for example caused by a person touching a live component in the attached appliance, causes some of the current to take a different return path which means there is an imbalance (difference) in the current in the two conductors (single phase case), or, more generally, a nonzero sum of currents from among various conductors (for example, three phase conductors and one neutral conductor).

This difference causes a current in the sense coil (6) which is picked up by the sense circuitry (7). The sense circuitry then removes power from the solenoid (5) and the contacts (4) are forced apart by a spring, cutting off the electricity supply to the appliance.

The device is designed so that the current is interrupted in a fraction of a second, greatly reducing the chances of a dangerous electric shock being received.

The test button (8) allows the correct operation of the device to be verified by passing a small current through the orange test wire (9). This simulates a fault by creating an imbalance in the sense coil. If the ELCB does not trip when this button is pressed then the device must be replaced.

Having studied the functioning of ELCB for the monitoring of earth leakage current which in other words indicates the health of deployed insulation in the electrical network, it is worth noting and further probing the following aspects of earth leakage situation vis-a-vis human safety, particularly in the context of Indian scenarios.General complaints have been put forward that such high sensitivity devices trip quite often due to risen value of capacitative leakage current to the ground - causing annoyance and giving a feeling of nuisance tripping. If we actually analyse the prevailing untidy electrical installations, particularly at the temporary project sites, such nuisance/frequent trippings are because of unsound insulation conditions and due to use of large lengths of wires/ cables at a stretch. In all prudent sense, the matter needs serious consideration, if at all we claim to save human life and care for human beings, otherwise, ELCB will be left to provide human safety under very limited situations. We are required to draw lessons from the practices in USA and the preferred recommendation of International Electrotechnical Commission (IEC).

This is a safety call to the users of electricity and the manufacturing sector of ELCB in India.

From researching, manufacturing to marketing, and from producing magnetic units to finished products, Taiwan-based Magtech Magnetic Products Corp (MMPC) is positioned as one of the most reputed and reliable partners in the magnetic field

Da Jie Electricity Machinery Industrial Co. Ltd has lined up strategic business plans for the Indian market where it aims to provide high quality, efficient, and cost-effective products through its channel partners

Air to Water Generation is a Reality

Air-to-Water Generation (AWG) technology is real; in fact, we have devoted our life and work - separating moisture, and drinking water, from air – and are set to enter Indian markets – both consumer and institutional

Ageing of safety shoes is an entirely normal process. To benefit from all the positive properties of a safety shoe, one must be aware of the limited product life of shoes. Ageing happens because the PU sole material is subject to

More and more countries are embracing the mandatory safety shoes standards in order to guarantee protection at the workplace and are creating awareness on the importance of wearing safety shoes at work. Liberty’s Warrior brand of boots

For a construction worker, the most important safety equipment is probably “a good pair of working shoes”. This, in fact, is a necessity as he is on his feet for long hours of the day and even at night, and quite often in dangerous site conditions such

The Warrior brand from the house of Liberty is an acclaimed name in the construction industry for safety shoes. Designed to ensure utmost safety against extreme odds and to facilitate comfort during work, the Warrior work

In today’s world of increasing attention to green and sustainable products, materials and solutions, the colour of the earth wire is also usually green. But has the earthing electrode been upgraded to a truly ‘green’ product

Bangalore-based Kaveri Ultra Polymers has been manufacturing polymer industrial products for use in material handling plants and other engineering industries for more than four decades. The company also has

The new Utkarsh logo is a demonstration of the different sectors the company has ventured into viz. polymer pipes and fittings, transmission and telecom towers, poles and masts for lighting

Design and Construction of Parking Structures

With urbanization and popularity of the automobile, parking structures have become a necessity throughout the world. Over 2000-3000 new automobiles are being added per week on the roads for cities

GICMAR offers specially made training modules and courses, designed and taught by industry stalwarts with live case studies to broaden the horizon of engineers and FCM. Well, this global institute

Skilled manpower and knowledge are key factors for the economic and social growth of any country. India is the second largest English-speaking nation with a strong base of middle class consumers. Its biggest strength is that it is a young

India has witnessed a burgeoning purchasing power especially in the upper middle class segment. One of the most telling examples of this transition is the growing visibility of erstwhile luxurious air-conditioners in homes. People, and

In the ever growing sectors of construction, engineering, defense, automobile, pharmaceuticals, mining, drilling, oil and gas etc. there is a huge demand for safety shoes for the ground level workforce employed