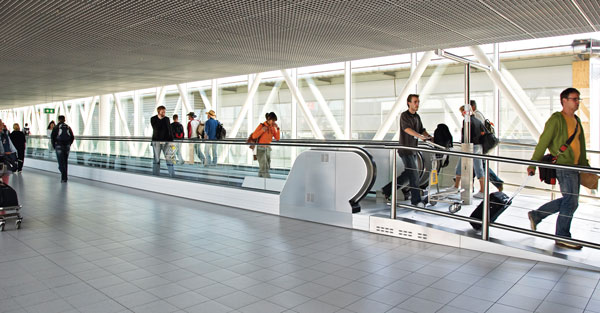 Innovation is the ability to provide solutions that are not only new but also meet industry demands with the utmost efficiency, making life much easier. Moving large groups of people safely and smoothly, especially in big public transit centers like airports & metros remain one of the foremost challenges of Urbanization.

KONE InnoTrack™ is a break- through innovation in the escalator business. The module-based flat technology platform and the re-installation possibility enable its use in buildings and premises in which autowalks have not been used before. KONE InnoTrack™ can be installed without changes in the floor structure as it enables easy installation in both the existing and new buildings.

The KONE InnoTrack™ is the first autowalk that doesn't need a pit. Its revolutionary design allows it to be brought to the site even 'through the door'. One can shorten it, lengthen it, change the color or re-install it somewhere else. Due to the innovative pallet return mechanism and a new kind of motor solution, each KONE InnoTrack™ is so flat, that unlike conventional solutions, it can be installed entirely on the finished floor level. These features make KONE InnoTrack™ a solution for a wide range of different locations and premises with a need for efficient traffic flow.

KONE InnoTrack™ is environ- mentally friendly because of its oil-free drive system and pallet chain and the fact that it uses significantly less material than traditional solutions. The new technology utilizes the KONE PowerDisc™ machinery, which has proven itself as a reliable and energy-efficient solution in KONE's elevators.

The design is based on three simple but ingenious innovations:

1) The components traditionally placed in the pit have been moved to the balustrades. 2) The pallets lower themselves directly under the stepping surface instead of circling the entire truss to the bottom. 3) The modular design of the truss makes it uniquely simple to assemble and modify

– Standby Operation adjusts speed based on usage, further reducing energy consumption by up to 30%. 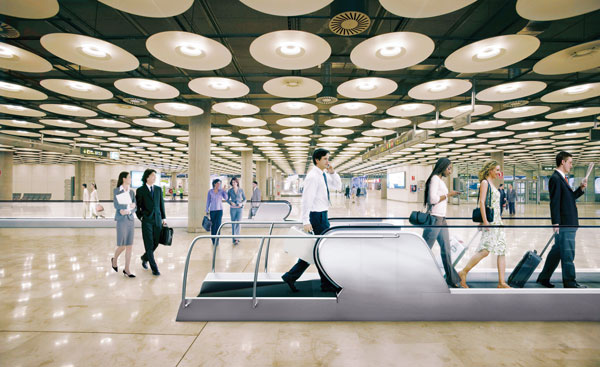 With the KONE InnoTrack™, safety is built in. All major components undergo rigorous testing to assure proper function and operation.

KONE InnoTrack™ uses thoroughly tested technology with a proven track record in other KONE products. It has merely been packaged in an innovative way. This means that one can enjoy the best of both worlds: the benefits of a revolutionary innovation with no teething troubles.