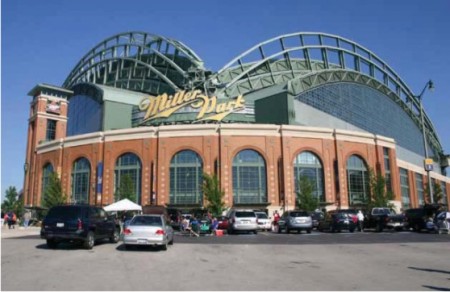 As the final game of the season at Miller park completed in September 2006, a different team of players went into action. This time the team comprises engineers who act as coaches, and the first string players were Millwrights, iron workers, operating engineers and labors. The task which they had to perform was a major repairing job on the stadium moveable roof, replacement of the ten bogies (powered carriages) on which the five movable sections of the roof are carried. 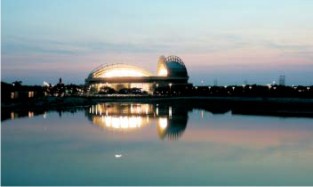 Miller Park opened its doors for Milwaukee Baseball’s fans on April 6, 2001, at South-Central Milwaukee, Wisconsin, USA with over a decade of planning and 41/2 years of constructions. This park is truly state-of-the-art facility with modern amenities and can seat 42,400 spectators through its stadium and suite seating. There are a total of 70 suites in each with spectacular views of the play on the field. There are three family sections addressing the needs of families with youngsters. As stated, a fan-friendly ballpark, Miller Park accommodates the needs of its visitors with plenty of food and beverage options, as well as an ample supply of much needed restrooms.

Overall, the Miller Park site covers 265 acres, with the building covering 25 acres. It has been noted that it would take 4,655,926,995 baseballs to fill Miller Park.

One of its Kind Convertible Roof 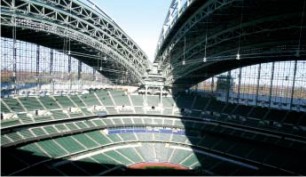 A signature fan-shaped convertible roof, a color replay board of epic size and four level of seating show how Miller park is one of the baseball’s crown jewels. In fact, it marked the largest construction project in Wisconsin history.

In less than 10 minutes, the convertible roof of Miller Park opens or closes in virtual silence. Reaching 200 feet above the playing field, the roof consists of seven panels, each as large as the roof of the Bradley Center in Milwaukee . Below sits the turf made of natural grass. A home run to center field in Miller Park would have to scale the 8 foot wall and clear the 400 foot distance from home plate.

Need for Repairs on Moveable Roof

As the 12.000 ton roof is designed in a fan-shape, with each of five movable sections pivoted at its home-plate end and riding on two bogies at its wide (outfield) end 183 meters away.

The 6,7 metres long original euipment bogies, two at each of the far corners of each fan-shaped roof section, were fitted with pairs of double-flanged wheels to ride on an eight inch-wide circular track approximately 42 metres above ground level. Three-phase power for the bogie drive motors is fed out along each roof section from the home plate pivot end, eliminating any need for sliding contacts.

The two double-flanged wheels on each bogie were arranged to ride the single track in an in-line fashion. Therefore, additional safety is provided by guide rollers that follow single tracks mounted on both sidewalls of the main track bed. The original-equipment bogies proved inadequate for their massive burden, and the day after the Brewers’ September home finale, the roof had left in a partially open position when a bogie guide roller shattered. Additionally, a drawback of the old bogies was that their wheel-faces were cylindrical.

As explained by the consulting engineer, the problem with the cylindrical wheel having a relatively wide bearing surface where the outside of the wheel travels farther than the inside, about 140 mm in the worst case. It was this anomaly that may have caused the snapping sound as the bogies rolled along the rail.

To remove the drawback related with the cylindrical wheel, it was decided to place the wheel on the new bogies having spherical rolling surfaces, to allow for minor bogie tilt, and the wheel axles are turned such that the bogie naturally follows the curved track. Additionally, the new bogie design employs four wheels arranged in two pairs, instead of the previous two-wheel design.

The new bogies are 7,3 metres long and each weighs either 49 or 66 ton, depending upon its location. They are powered by 45 kw motors via gear boxes and massive roller chains.

Process Involved in Replacement of Bogies 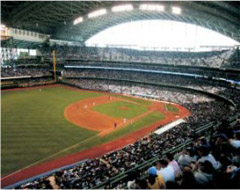 The replacement of each bogie was straightforward: lift the roof, remove the ld bogie, then position the new bogie and lower the roof, but doing it was a little more complicated as there was extensive work to prepare the roof panels for jacking,” says the consulting engineer, explaining that jacking brackets to lift against had to be designed, fabricated, and installed, as well as jacking platforms.

According to Millwright’s General Foreman and Project Manager for Price Erecting, contractor had also to be taken into account, lateral movement during the lifting process for much of the work. Working 183 meters from the pivot ends of the roof panels, thermal expansion and contraction were significant, and wind effects could not be ignored.

The stadium roof sections were jacked in ten separate lifts, one for each bogie replacement. Each time, the roof was lifted 102 - 152 mm, the old bogie driven out under its own power, a new bogie rolled in, and the roof lowered back into place on a spindle bearing. A 500 ton crane moved bogies to and from ground level.

The weight lifted ranged up to about 800 ton, so a capacity safety margin was provided by using four Enerpac 300 ton, 700 bar, 300 mm stroke hydraulic cylinders for each lift. The cylinders were connected to a common manifold fed by an Enerpac 9,3 kW, 700 bar electric pump.

The jacks were equipped with lock rings to guarantee load holding, and a locking valve was used in the pump-to manifold feed line. The locking valve incorporates a check valve with a manually controlled pilot operator.

The 300 ton hydraulic jacks were a single-acting load-return type. To provide positive pull-down, the Enerpac pump setup included a valve with a venture feature to deliver negative pressure when needed. The hydraulic system was assembled and tested before being put into service. To provide for lateral movement during lifts, the jacks rested on a 38 mm thick steel plate, then a sheet of Teflon, and then a sheet of polished stainless steel.

All ten of the new bogies are in place and ready for the new seasonal 007 games. Stadium officials are proud that not one of the more than 550 events held during its six-year history has been cancelled because of weather, so they are understandably pleased at the Prospect of a much more reliably operating roof.