Awareness of capex preservation is increasing amongst asset owners. By using the latest developments in Protective Coating technologies, they are avoiding expensive Repair & Rehabilitation expenses, and thereby reducing the Life Cycle Cost of massive assets such as the Industrial Cooling Towers. 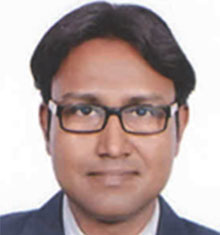 Industrial Cooling Towers are used to remove heat through evaporation of water in a moving air stream being carried from various sources such as a machinery or some heated process material. Their main use is to remove the heat absorbed in the circulating cooling water used in large processing units, such as power plants, refineries, petrochemical plants, steel plants, fertilizer and chemicals plants, etc. They serve to dissipate the heat into the atmosphere and air diffusion distributes the heat over a much larger area as compared to what hot water can distribute heat in a larger body of water.

Few coal-fired and nuclear power plants located in coastal areas make use of once-through sea water for cooling. In such a set-up, the discharge water outlet system requires very careful design to avoid environmental problems by causing disturbance in the aquatic life. 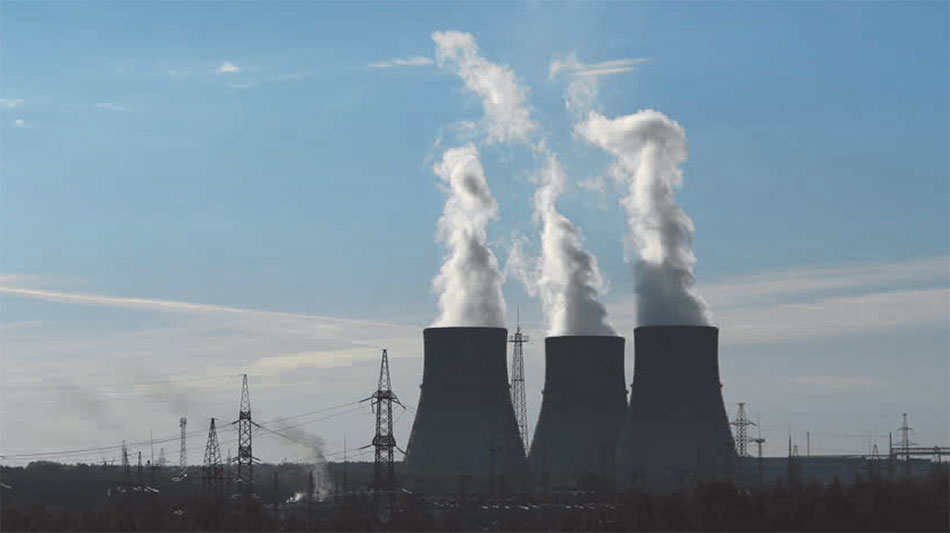 Based on the method adopted to circulate the air, cooling towers can be classified as:The circulation rate of cooling water in a 700 MW coal-based power plant is typically about 71,600 cubic meters an hour and the circulating water requires a supply water make-up rate of approximately 5 percent (i.e., 3,600 cubic meters an hour). Most petroleum refineries also have very large cooling tower systems. A refinery processing 40,000 metric tons of crude oil per day (i.e., 3,00,000 barrels or 48,000 m3 per day) circulates about 80,000 cubic meters of water per hour through its cooling tower system.

Such massive water handling requires equally expansive water containing concrete structures. A sizable capital expenditure budget is allocated towards these, as they are an inevitable part of the processing system. As prudent investors, it is important that preservation of these valuable assets is contemplated and effectively planned. 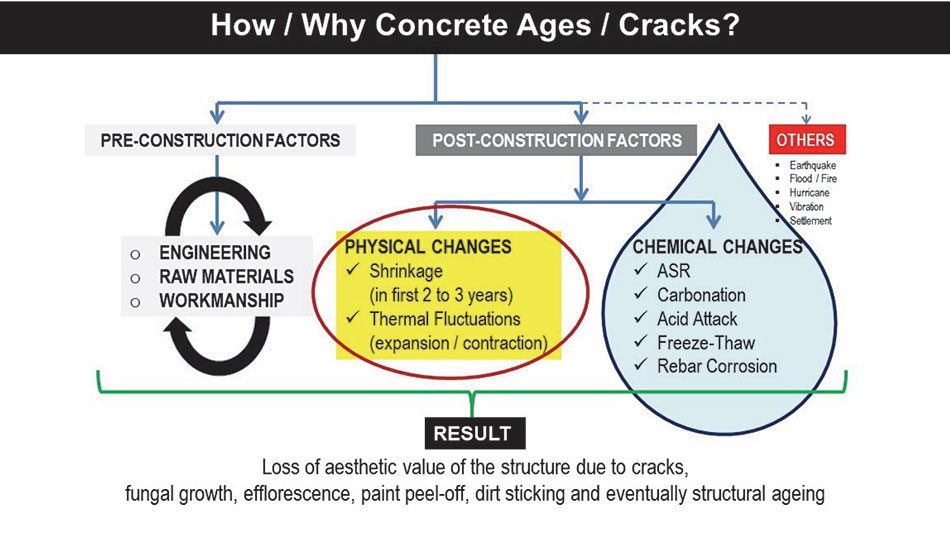 This figure is a concise depiction of various forces which results in disintegration of a concrete structure with time.

In the last few decades, accelerating consumerism and its demands on the construction sector has posed serious questions in terms of availability of high-quality raw materials, which are essential for a structure to have a long and dependable life. The limited natural resources cannot suffice for this rate of growth versus the rate of depreciation that has surfaced due to several nations growing together at a fast pace. Most of the construction materials that are being used today and consumed in enormous quantities, after completion of their service life do not remain by nature, recyclable; the finest example being Concrete. The speed at which depletion of these resources are taking place demands serious attention towards finding ways and techniques to mitigate this threat by implementing proactive solutions that can keep structures healthy and longer-lasting.

While at the time of construction, water is an essential element to initiate the process of hydration, once the construction is over, ingress of water into concrete results in these chemical changes within a structure that eventually results in its ageing.

A closer look will reveal that all the above five causes are mainly due to ingress of water/moisture through surface cracks and the labyrinth of micro pores and nano-capillaries within a concrete structure. Water, while it sustains life, also acts as the most destructive element that has the power to disintegrate a compound back to its elemental form. Due to this fact, application of Protective Coatings ensure that a civil structure remains waterproofed, has emerged over the years as a proven solution to enhance its useful service life. Thus, more dependable coating technologies are being adopted to protect concrete structures, starting from foundation to the rooftop.

We know that the presence of an electrolyte and potential difference between two connected zones through a metallic pathway causes loss of material at the anodic location, and results in corrosion of metal. Similarly, ingress of water/moisture in cured concrete brings about several chemical changes causing its gradual disintegration. However, when it comes to protection of metals, much more extensive guidelines are being accepted and adopted globally like the ISO:12944 which provides painting system guidelines for corrosion protection of steel structures. Concrete, on the other hand, has been covered with surface preparation standards (by International Concrete Repair Institute); however, the industry yet awaits a universally accepted global standard, providing guidelines for surface coating of concrete structures.

Coating technologies have travelled from age-old bitumen to coal-tar to epoxies to polyurethanes. Coal tar mastic initially superseded in terms of performance against bitumen due to its resistance against soil bacteria and root infiltration, especially for underground applications. Eventually, the hybrid formulations, where coal tar base was used as epoxy resin filler in combination with phenalkamine hardeners, delivered high performance coaltar epoxy coatings at a much affordable price.

Then the chemistry of solvent-free formulations gave a new dimension to the protective coating technology by delivering coatings with extremely low micro-porosity. Thin aliphatic polyurethanes augmented well to all grades of epoxies by providing them good UV protection. And with the advent of 100% Solids, High-build, UV resistant PU coatings, preservation of critical concrete structures for decades has been conceptualized.

The Chamera Hydro-Electric Project (Stage-III) is located on the river Ravi at village Kharamukh (250.0 m downstream of the confluence of river Ravi and Tundah Nala) in Chamba district of Himachal Pradesh. The Project consists

Terex celebrates a decade of success in India

Terex — a diversified global manufacturer of equipment for mining and quarrying industries — is celebrating 10 years of operations in India and has announced expansion plans for its 45-acre manufacturing plant in Hosur, with which it plans

Dr. Fixit introduces LW+Super for enhancing the efficiency of M-sand

The rapid boom in the construction industry, has tremendously given rise to the demand for sand, causing deficiency of suitable river sand in many parts of India. Besides, river mining causes imbalance in the river bed water flow, and

Regardless of the quality of pavement material and design, increase in vehicular traffic and changing environmental conditions will reduce the service life of pavements and ultimately result in their failure. The causes and

Buildtech: Pragmatic Approach to the Methodology of Retrofitting Buildings

With the increase in construction of buildings in the last two decades, it has been observed that many of the structures are already showing signs of distress. In some cases, repair measures become necessary even within a span