When considering concrete strength and waterproofing within the interfacial zone we must also consider the particle packing effect. 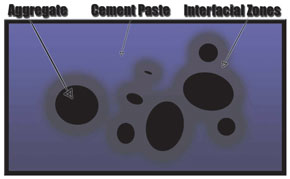 To summarize the weakness of interfacial zones, we know that the regions around the aggregate have increased w/c ratios due to lower clustering of cement particles resulting in increased pore and capillary sizes as a direct result of the higher w/c ratios. The hydration effects in the areas around the aggregates are not as complete as they are in the concrete mass. We also know that bleed water can further affect the hydration around the aggregate. This further results in a less hydrated, weaker cement paste near the aggregate and has a negative effect on the bond of the cement paste to the aggregate. These areas become the weak link in the concrete chain and will be more susceptible to damage by water and other related problems such as chloride ion ingress, alkali silicate reaction, freeze/thaw cracking, and spalling to name just a few. It will also affect the concretes strength and the overall durability of the concrete.

It can be clearly argued that if we can increase the CSH development in the interfacial zones, we can thereby reduce the negative effects of particle packing resulting in an increased overall strength and impermeability which are directly linked to the long-term durability of the concrete.

So the question then becomes "how do we increase the CSH development within the interfacial zones". The idea of lowering the w/c ratio of the concrete may be one of the first ideas that comes to mind, but this is subject to limitations. In theory, when we reduce the w/c ratio to the point that we have restricted the connectivity and reduced the size of the pores and capillaries within the cement paste to be considered impermeable, the concrete should be waterproof. In practice however, the waterproofing capabilities of the concrete needs to take into account the effects of the aggregate interfacial zones. If we consider that data is available showing that concrete can have up to 100 times the water permeability of the cement paste it is made from, it is easy to discredit lower w/c ratios as a solution to interfacial zones. We must also consider the issues of low w/c ratios on the autogenous shrinking of the concrete. This does not even take into account any other considerations (such as cost) that come with lower w/c ratios. It seems fairly clear that water may still have access into the concrete even though the cement paste may have a very low porosity. The waterproof concrete we have made turns out to be more permeable than we expected. This also means that methods of lowering the w/c ratios such as using water reducers, and super plasticizers cannot contribute to a significant solution for the interfacial zones.

In considering how to increase the CSH in concrete, there are several potential technologies available. These include densification materials (such as silicate based technologies), and pozzolans ((such as GGBFS (ground granulated blast furnace slag)).

Let us first consider the densification approach as a potential method to increase CSH in the interfacial zones. These types of materials when added as an admixture, react with the free lime in the concrete to densify the concrete and, in theory, work to fill the pores and capillaries with CSH gel. When we consider that densification systems will be subject to the same particle packing effects as cement particles, and that when using these types of products once the active chemical has reacted there is no further reaction, this means that as a reaction occurs in the cement paste the reactive material cannot transfer towards the interfacial zone as it is blocked and used up by the reaction with the free lime in the capillary spaces where there is a higher concentration of the reactive materials. It will also be affected by a one-sided growth effect in which the densification products can only access the areas around the aggregate from the cement paste sides. The cement paste will have less capillary spaces from the aggregate side limiting access from the side with the aggregate. This reduces further the ability of densifiers to build CSH in concrete's interfacial zones. Densifiers also have the added fault of promoting cracking in concrete through increased heat of hydration associated with accelerated setting times.

There are many types of pozzolans both natural and synthetic. They are as a general rule good for concrete and many will increase CSH growth within the concrete. They also tend to be environment-friendly and reduce cost. Pozzolans (subject to the type) will increase strength, reduce permeability and increase durability to some degree. Pozzolans however are also subject to the same problems as the lower w/c ratio concretes and densifiers. The particle packing effect is still present and the limitation of one-sided growth will reduce their abilities to enhance the CSH growth around the aggregate.

The concept of increasing CSH growth in the concrete to help strengthen the bond between aggregate and cement paste is sound, but the difficulty is in the delivery system. By simply making the concrete more reactive we are still subject to the effects of particle packing and one-sided growth. Therefore, we must consider a method to increase CSH in the interfacial zones that not only increases CSH growth around the aggregate, but also possesses a delivery system that can overcome the particle packing effect and one-sided growth. The ideal solution must be something that can migrate through the pores and capillaries and promote dramatic CSH growth in areas with high porosity and a lower amount of cement particles while not being reactive itself in nature. 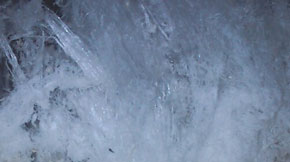 Using a new generation crystalline technology, we can effectively overcome interfacial zone weaknesses and thereby strengthen the weakest link in the concrete chain.