The Indraprastha Sports complex was developed for Asiad Games held at New Delhi in 1982. The sports complex consists of magnificent indoor stadium–Indira Gandhi Indoor Stadium, an ultramodern velodrome, a convertibleplayer’s block and associated buildings and facilities all constructed to International standards.

The Indoor Stadium known as Indira Gandhi Indoor Stadium is the3rd largest of its kind in the worldand the largest in Asia and Europe. The structure was constructed by M/s Triveni Structurals Limited, Allahabad a joint venture of Government of India and Volst Alpine Astria and was constructed for Delhi Development Authority. The design for the roof structure was carried out by Professor Z.S.Makowski, a world renowned figure in design of such structures, on behalf of Engineers India Limited, New Delhi.

Government of India has proposed to renovate this stadium for hosting Common Wealth Games 2010 scheduled to be held at New Delhi. As part of the renovation proposals, it was required to modify the roof structure including replacement of roof sheeting and modifications to roof truss members. Consequentially, it is required to replace existing elastomeric bearings below the saddle on the pylon head. This is necessitated as the elastomeric bearings have served their life.

At each saddle location 2 bearings of size 372 mm X 732 mm of thickness 84mm have been provided. The main structural members connecting saddle are 2 tension members holding the roof truss in the front and 2 nos back stays. The saddle is connected to these members thru hinge joints.

The job of lifting the saddle and replacement of bearings was awarded to M/s Varshitha Concrete Technologies Pvt. Limited Hyderabad. It was very important to understand the behavior of the roof structure when the saddles are lifted to replace the bearings. In absence of detailed records of construction sequence adapted during construction of the structure, it was necessary to analyze the behavior of structure when lifted. After detailed analysis method statement was prepared for the execution of the work.

With the limited space available between the saddle and the bottom bearing plate of only 90 m, special flat jacks of closed height less than 85mm had to be procured to accommodate within the available gap. The diameter of the jacks also had to be limited to 160mm so that at least 6 no of jacks can be fixed below the octagonal saddle bearing plate. 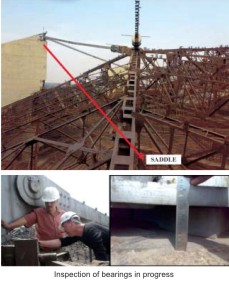 The dimensions and details of Jacks and pump are as under.Elastomeric bearings of size 372 X 732 X 84 mm (a total 16 nos) confirming to CPWD pecifications mentioned in the tender document. The bearings were tested as per standards confirmed through quality assurance certificate issued by Director of Quality assurance.

It was important to lubricate all joints including hinge joints for smooth lifting process so that no secondary stresses are developed in the structure due to friction. Consequently all joints including hinge joints (of tension member and backstay) thoroughly using hydraulic oil. The nuts of the oling down bolts of saddle are sprayed with RUSTOLENE S-56 spray at least 24 hrs before loosening for easy loosening of the nuts.

The elastomeric bearing stopper plate on one side were carefully cut and removed before loosening the nuts. To enable safe working suspended working platform was fabricated and erected towards the roof side of the saddle.

Before commencement of replacement of bearings trial lifting was carried out on PYLON-7 and the total load was observed to be approximately 182 tons. Hence it was decided that 4 jacks of 75 ton capacity each would be sufficient to lift the saddle as against 6 nos proposed. This would enable sufficient gap for placement of safety shims after lifting the saddle.

After placing the 4 nos of jacks in position and connecting all the 4 jacks to a single pump through a manifold, the nut of saddle holding down bolts were loosened up to a maximum of 12mm. Now all the 4 Jacks are operated and the saddle lifted gradually. 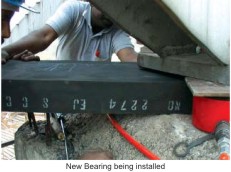 The existing bearings are now carefully removed and the bearing plates are cleaned using sand paper and finally cleaned by a volatile solvent-petrol. The new bearings are fixed in position and the saddle is lowered by releasing the pressure in the jacks.

During the process of lifting close watch was kept on welded joints and hinge joints for any unusual movements/rotations/ sounds. Since such movement/ sounds are an indication of secondary stresses being developed in the structure. Fortunately, no such abnormal behavior is observed.

Provided safe approach to the working location (ladders/Hoist). Instruct all labor to wear safety belt in heights, while climbing.

Check all hydraulic connections for leakage

Provided adequate PPE to all workmen involved in the activity.

Safe working platform was fabricated and erected at every bearing location for easy access on the roof side of the saddle. 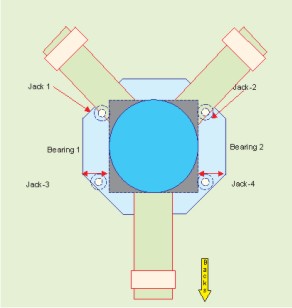 The job was challenging in nature and is a unique one probably these kind of bearing replacement for an Indoor stadium roof truss was attempted for the first time in India.

The job was made more interesting by non availability of detailed construction sequence Adapted during construction. Utmost safety precautions and care were taken during the execution of the work as no one is sure of the behavior of the structure during such execution.

Probably all precautions were well taken the project went off very smoothly and was completed in a record time of only 5 days as against estimated 25–30 days.

Value Engineering with MCI®-2019 for Concrete Maintenance and Repair