The Foot over bridge leading to the Pazhavanthangal railway station Chennai is among the steepest bridge and the commuters, particularly the senior citizens were finding its use very difficult. It was due to this difficulty the proposal for flight of steps leading to the platforms of railway station directly from the Pazhavanthangal subway was made. The original project proposal was prepared in 2004. But the project ran into problems initially with the contractors, who bagged the work order, but decided for abandoning the work. The works belong to Southern Railway.

The Railway required a solution for how to demolish the structure without disturbing the traffic operation and railway line. If they adopt traditional method of breaking, it will develop cracks in the structureand it also will take more time.

The RCC structure is 23 years old having a length of 4500 mm, breadth 700 mm and height of 6000 mm. Concrete used for casting (as per records) is M-25 grade provided with steel Reinforcement of 20mm and 32mm dia bars.

The problem was referred to Hilti by Railway. The Hilti team discussed the problem with Mr. Sekar, DEN and Mr. Rajendran - Bridge Engineer of Southern Railway and presented the process and methodology of Hilti systems containing Diamond Wall saw & Wire saw for cutting the RCC structure and DD-750 HY for coring with less vibration without disturbing the existing structure in a very short span (24-48 hours). The solution was provided by Hilti was suiting railway requirements and was very safe and fastest possible.

After discussions and getting convinced about the techniques and the capability of Hilti officials of Southern Railway approved the systems and tenders were invited. The job was awarded to a leading railway contractor Mr.Radhakrishnan.

The work was started and satisfactorily completed on 28th Feb 2008. The author is grateful to the railway officers, and the contracting firm for showing confidence in the modern Hilti Technologies. Thanks are also due for the Hilti field staff who executed the work. 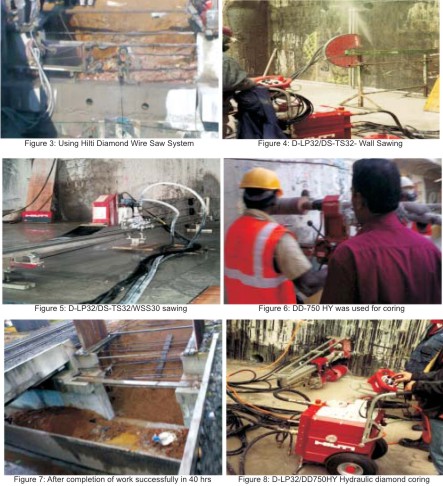