From foundations, floor slabs and exterior precast panels, to water treatment facilities and under ground urban infrastructure, concrete is one of the most commonly used building and construction materials. However, due to its composition, a mixture of rock, sand, cement, and water, concrete is often susceptible to damage and deterioration from water and chemical penetration.

These deleterious effects can be avoided through the use of crystalline waterproofing technology, which effectively improves the durability and life span of concrete structures, there by reducing long-term maintenance costs. This article explore & show crystalline technology provides a high level of performance to Concrete mixtures, materials, and structures, and what design professionals need to know in order to specify and understand how this chemical technology will enhance building projects.

The Nature of Concrete 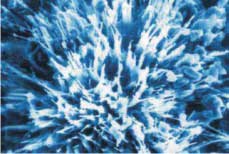 The aggregate base of a concrete mixture is formed by rock and sand. This cement and water mixture creates a paste that binds the aggregates together. As the cement particles hydrate, or combine with water, they form calcium silicate hydrates. The mixture then hardens into a solid, rock-like mass.

Concrete is also a water-based product. To make this mixture workable, easy to place, and consolidate, more water than is necessary for the hydration of the cement is used. This extra water, known as the water of convenience, will bleed out of the concrete, leaving behind pores and capillary tracts. Although concrete appears to be a solid material, it is both porous and permeable.

Water reducers and super plasticizers are used to reduce the amount of water in the concrete mix, and maintain its workability. However, pores, voids, and capillary paths will remain in cured concrete and can carry water and aggressive chemicals into structural elements that will corrode steel reinforcement and deteriorate concrete, thus jeopardizing the structure’s integrity.

The Porous and Permeable Nature of Concrete

Concrete is best described as a porous and permeable material. Porosity refers to the amount of holes or voids left in concrete, is expressed as a percentage of the total volume of a material. Permeability is an expression of how well the voids are connected. Together, these qualities allow pathways to form that allow the movement of water into, and through, along with the cracking that occurs due to shrink–age. Permeability, a broader term than porosity, is the ability of liquid water under pressure to flow through porous material.

Despite its apparent density, concrete remains a porous and permeable material that can leak and deteriorate rapidly when in contact with water or the intrusion of aggressive chemicals, such as carbon dioxide, carbon monoxide, chlorides, sulfates or other substances. But there are other ways in which water can be transported through concrete.

The direction of flow could vary base on environmental conditions. The direction of vapor flow is critical when applying water proofing treatment in situations where an unbalanced vapor pressure gradient exists. Typical examples include:

Crystalline water proofing technology improves the water proofness and durability of concrete by filling and plugging pores, capillaries, micro-cracks, and other voids with a nonsoluble, highly resistant crystalline formation. The water proofing effect is based on two simple reactions, one chemical and one physical. Concrete is chemical in nature. When a cement particle hydrates, the action between waterand the cement that causes it to be come a hard, solid mass. The reaction also generates chemical by products that lie dormant in the concrete.

Crystalline waterproofing adds another set of chemicals to the mixture. When these two chemical groups, the byproducts of cement hydration and the crystalline chemicals, are brought together in the presence of moisture, a chemical reaction occurs. The end product of this reaction is a non soluble crystalline structure.

This crystalline structure can only occur where moisture is present, and thus will form in the pores, capillary tracts, and shrinkage cracks in concrete. Wherever water goes, crystalline water proofing will form filling the pore, voids and cracks. When crystalline water proofing is applied to the surface, either as a coating or as a dry shake application to a fresh concrete slab, a process called chemical diffusion takes place. The theory behind diffusion is that a solution of high density will migrate through a solution of lower density until the two equalize.

The crystalline waterproofing chemicals spread through the concrete and become available to the byproducts of cement hydration, allowing the chemical reaction to take place. A crystalline structure is formed, and as the chemicals continue to migrate through the water, this crystalline growth will form behind this advancing front of chemicals.

Instead of reducing the porosity of concrete, like water reducers, plasticizers, and super plasticizers, the crystalline formation engages the material filling and plugs the voids in concrete to become an integral and permanent part of the structure.

Because these crystalline formations are within the concrete and are not exposed at the surface, they cannot be punctured or otherwise damaged like membranes or surface coatings. Crystalline waterproofing is highly resistant to chemicals where the pH range is between three and 11 under constant contact, and two to 12 under periodic contact.Crystalline waterproofing will tolerate temperatures between-25 degrees Fahrenheit (-32degrees Centigrade) and 265 degrees Fahrenheit (130 degrees Centigrade) in a constant state. Humidity, ultraviolet light, and oxygen levels have no impact on the products ability to perform.

Crystalline waterproofing offers protection against the following agents and phenomena:

The more traditional methods of protecting concrete, such as membranes and other coatings, may still leave it susceptible to water and chemical damage. Only with the addition of crystalline technology the pores and micro cracks that normally result from the process of setting and curing, allow concrete to be sealed.

Existing basements that are subject to water seepage or vapor transmission through foundation walls and floors can be treated by the application of crystalline waterproofing and protection on the negative side, or the inside, of the structure. Surface coatings will blister and peel when moisture seeping through the concrete dissolves soluble minerals and deposits them on the surface, under the coating, in the form of efflorescence, a white powdery substance that forms on the wall surface. Because crystalline waterproofing penetrates into the concrete, plugging the pores beneath the surface, it does not depend on surface adhesion and will not blister and peel off, like surface barriers. “I specify crystalline waterproofing on virtually every one of my projects as an admixture for the retaining side of walls where applied membranes cannot be used,” says Mel Cole, FCSI, an architectural specifier in Soquel, California. Vapor transmission through basement floors and walls is a common problem that may lead to damp, musty odors. Testing has shown that the application of multiplicative crystalline technology under these conditions will reduce vapor flows as much as 50 percent, which in most cases, will result in a drier environment.

Although concrete may appear to be a simple product to put together, it requires a highly engineered approach. In an increasingly competitive design and construction environment, where high performance requirements, such as longer life cycles, more durable concrete, and value engineering are expected, careful consideration must be paid to basic requirements, such as the concrete, water, and cement ratio; cementing materials, and more sophisticated chemical admixtures. Effective use of crystalline waterproofing technology will reduce the porosity and permeability of conventional concrete, and provide the high performance advantages and benefits that building owners and design professionals have come to rely upon in design and construction projects.