Self Compacting Concrete for Rafts and Retaining Walls 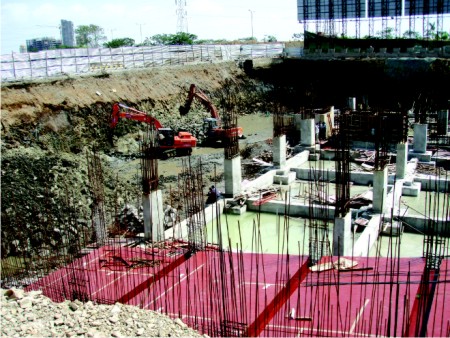 Self–compacting concrete can be defined as a category of High Performance Concrete that hasexcellent deformability in the fresh state and high resistance to segregation and can be placed and compacted under its self– weight without applying vibration. This method of placing concrete actually started in Japan in 1998 for the walls of a large LNG tank belonging to Osaka Gas Company, where the requirement was to place concrete amidst congested reinforcement. A number of projects since then have been executed around the world with a variety of application needs and requirements.

Development of Self– Compacting Concrete

For several years, the problem of the durability of concrete structures was a major topic of interest in the concrete industry. To make durable concrete structures, sufficient compaction of concrete by skilled workers is required. However, the gradual reduction in the number of skilled workers in the developed world, led to similar reduction in the quality of construction work. One solution for the achievement of durable concrete structures independent of the quality of construction work is the employment of self-compacting concrete, which can be compacted in every corner of a formwork, purely by means of its own weight and without the need of vibrating compaction. The necessity of this type of concrete was proposed by Okamura in 1986. Studies to develop self-compacting concrete, including fundamental study on the workability of concrete, were carried out by various researchers and today one would find more than thousand technical articles that have been written on this topic.

A typical application example of self–compacting concrete is the two anchorages of Akashi–Kaikya Bridge opened in April 1998, a suspension bridge with the longest span in the world. The volume of the cast concrete in the two anchorages amounted to 290,000 M3. A new construction system, which makes full use of the performance of self– compacting concrete, was introduced for this. The concrete was mixed at the batching plant beside the site, and was pumped out of the plant. It was transported 200 mts through pipes to the casting site, where the pipes were arranged in rows 3 to 5 mts apart.

The concrete was cast from gate valves located at 5 meter intervals along the pipes. These valves were automatically controlled so that a surface level of the cast concrete could be maintained. In the final analysis, the use of self–compacting concrete shortened the anchorage construction period by 20% from 2.5 to 2 years.

The use of self–compacting concrete in India was actually a matter of academic interest in the initial stages. This was the case owing to the higher initial cost compared to the traditional method of concreting. But as many construction companies repeatedly found themselves in situations of time constraints and placement difficulties, the method of self compacting concrete started flourishing in Indian Sub-continent too. 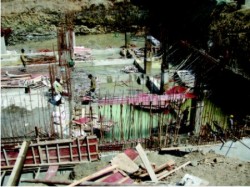 One of the areas of big concern for contractors and consultants is the raft foundation and basement of the structure. The problems are multifold when it comes to those structures that are built in areas where the water table is quite high.

Such structures are plagued by leakage of water into the basements and contractors generally spend sleepless nights in waterproofing them, which sometimes could even prove to be more expensive than the concrete itself.

The possibility of leakages in a structure generally occur due to flaws and cracks that develop in concrete as a result of shrinkage, thermal gradient, construction joints etc in concrete. Though careful design and detailing, material selection is done and exposure conditions are thought of, the water tightness of the structure still depends upon the construction practice, and the skillfulness of the worker at the site. Therefore it is of prior importance that the concrete is made independent of the worker and appropriate quality control measures are maintained. One aspect of making the body of the concrete water tight is to produce High Performance concrete, where certain durability tests are done and the quality of concrete ensured. A little improvement on the HPC is Self–compacting Concrete (SCC).

SCC therefore is a concrete which flows like honey under its own weight and when put into forms of any shape it fills it completely, parllely maintaining its homogeneity. It even goes around reinforcements and needs no vibration for compaction. Its rheology is very different from all other concretes; it has a moderate viscosity and an extremely high cohesion. Sometimes, we come across foundations where the thickness of raft is of the order of 1–4mts and the huge caging (reinforcements) becomes a big challenge to place the concrete and to ensure vibration. In such cases, the best option is to go for a self– compacting concrete, which ensures better compaction without any voids and also eases the placing method, adding to the saving in construction time. 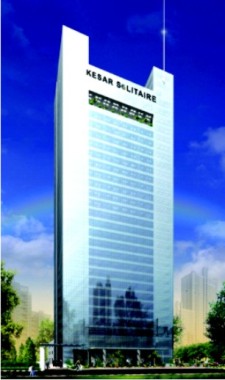 The Kesar Solitaire is a prestigious project being developed by M/s. Kesar Group, when completed would be a landmark on the Palm Beach Road in Navi Mumbai. This commercial complex is situated just next to the creek and the water table is about 1 meter below the ground. On examining the water, it was found to be highly saline and the chloride content in water was more than 7000 ppm. Another issue at the site was the upcoming monsoons, the basement needed to be completed before the start of the monsoons, which otherwise would have flooded the site. It was therefore decided to go for an M 40 grade SCC for the triple basement structure, which was 10 meters below the ground level.

The SCC mix was designed with “Corniche SF” brand Silica Fume to take care of the chloride ion permeability of the structure due to the saline water table. An RCPT value of less than 1000 coulombs according to ASTM C 1202 and water permeability of max 50 mm according to DIN 1048 was specified, so as to ensure the durability of the raft concrete. The mix actually contained higher binder content and therefore the water demand was high. 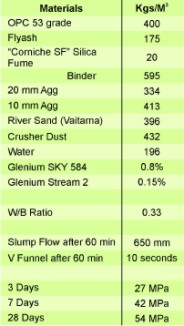 To ensure thorough dispersion of silica fume and flyash, a PCE based admixture was used. Glenium SKY 584 is a PCE based admixture based on the concept of Total Performance Control which not only helps in dispersion of fines but also allows longer slump retention. The concrete was produced in an RMC plant (M/s. L&T Ready Mix Concrete) and it typically took more than 60 minutes to reach the site. Glenium SKY 584, helped in achieving the retention of over 60 minutes, with a slump flow of more than 600 mm at the site. In order to improve the viscosity of the concrete, Glenium Stream 2, a viscosity modifying admixture was also added to the concrete.

The retaining walls, at the periphery of the structure, poised an entirely different issue. The thickness of the wall was 300 mm and after erecting the form work it was a challenge by itself to place and vibrate the concrete. It was therefore decided to use M 40 grade SCC so that even 3 meter pour (free fall) of concrete is possible. The use of SCC in retaining walls actually helped in achieving a homogeneous concrete void of any honey combs. The strengths achieved were more than 50 MPa at 28 days as the water binder ratio was maintained at 0.33. The mix design and the strengths achieved are given here:

The use of SCC has been found to be useful particularly in rafts and basements where the concrete has to withstand higher water table pressure and in places where the thickness of raft is more than 1 meter. In places, where the reinforcement is dense or the concrete has to be placed is not so easily accessible areas such as retaining walls, use of SCC is a boon to civil engineers. Use of SCC has also been found to be suitable in cutting down the construction time for structures. Further, some innovative uses have been found in rehabilitation and repair works as well.

While the material cost of SCC has generally been higher than conventional concrete, benefits such as reduction of construction time, reduction of labor and ultimately the durability of the structure more than compensates the cost. Being a unique solution for placing concrete in difficult areas, the absence of vibration and noise is the other advantage.