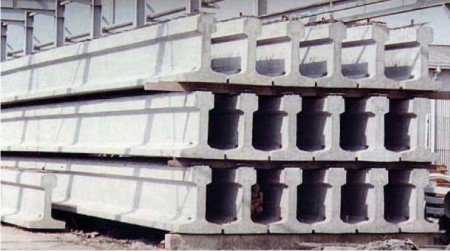 Concrete is perhaps the most important construction material due to its various added advantages. The major problem with concrete is that it is very weak in tension. To strengthen the concrete to withstand tensile stresses, reinforced and prestressed concrete have been developed. In prestressed concrete, cable layout plays vital role in reducing tension from the concrete. Due to curvature cable exerts forces on the concrete to counterbalance the forces causing tension. Cables are laid as a continuous curve but for analysis purpose, they are modeled by some mathematical curve. The most important of them is the discrete parabolic modeling in different spans. Parabolic modeling simplifies the analysis to large extent but in this process cable geometry at the intermediate supports becomes discontinuous. To have more realistic models, we have used reverse parabolas and B-spline curves for cable modeling. These curves not only ensure the smooth profile but also provide realistic stress value. In this study, on comparing the results of these three different models, it is found that there is significant variation in stress values at intermediate supports, which clearly indicates the importance of realistic cable modeling. 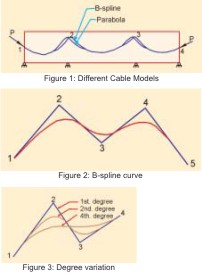 While analysing prestressed concrete beams in the text books 1-4, the prestressing cable is assumed to traverse parabolic profile. The reason being, for parabolic profile, curvature becomes constant and cable force can berepresented as an equivalent uniformly distributed load acting in the opposite direction to the working loads. Although, parabolic assumption simplifies analysis, thecable profile becomes discont–inuous at intermediate supports. Actual cable profile is like a smooth spline. In this study, prestressed concrete beams are analysed for parabolic, reverse parabolas and B-spline profiles (Figure 1). Using these methodologies, two prestressed concrete beams have been analyzed. Results are compared in terms of stresses and deflections at various sections of the beam. It is observed that cable profile plays vital role on the stresses and deflections hence it should be properly accounted for analysis and design purposes.

In continuous prestressed concrete structures where cable profile changes its curvature several times, each time a new parabola has to be defined. This is accounted through load balancing approach, analytically and STADD software, numerically.

This method was proposed by Lin and Burn4. In this reverse parabolas are used at the support to maintain smooth– ness of the cable. Due to fitting of multi parabolas and mathematical complexities in maintaining the continuity at the juncture of two parabolas, this approach is quite involved. Since this models the true profile, results are quite close to the exact ones.

A B-spline is a typical curve of the CAD philosophy5-6. It models a smooth curve between the given ordinates. Braibant and Fleury7, Pourazady et al8, Ghoddosian9 etc., have used this curve in shape optimization problems. When a B-spline curve is used the geometrical regularities are automatically taken care of. Following are few important properties of B-spline curve.

(1) The curve exhibits the variation diminishing properties. Thus the curve does not oscillate about any straight line more often than its defining polygon.

(2) The curve generally follows the shape of the defining polygon.

(3) The curve is transformed by transforming the defining polygonal vertices.

(4). The curve lies between the convex hull of its defining polygon (Figure 2).

(5). The order of the resulting curve can be changed without changing the number of defining polygon vertices (Figure 3).

The curvature of B spline curve, K, in a finite element is calculated using vector calculus as described in next section.

In this study, linear elastic analysis of prestressed concrete structures is carried out. Nine node Lagrangean element and three node curved bar element have been used to model the concrete and the cable. Cable is assumed to be embedded in the concrete. The radius of curvature R in the element is given by- R = 1/K . . . . (3)

Forces transferred by the cable to concrete element is shown in Figure 4. Assume curvature between 1&2 and 2&3 as equal to the curvature at two Gauss points. Let the length of the cable between 1-2 and 2-3 be approximated as-

Nci’s are shape functions of the cable element.

Using the formulae of vector calculus, normal and tangential forces Pn and Pt are calculated in the following manner.

where Tn is the tension in the cable, T is the tangent vector, r is the local co-ordinate and R is the radius of curvature.

The resultant of these forces is given by-

Their equivalent finite element nodal forces are worked out using virtual work theorem. Perfect bond between cable and the concrete has been assumed. The detailed formulation of this can be found in Ref.10. Using these formulations, a FE software PRES2D has been developed in FORTRAN program–ming language. 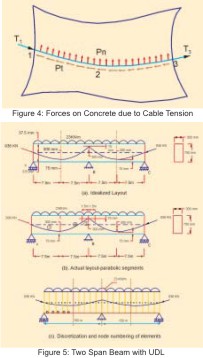 To compare the effects of parabolic, reverse parabolas and B-spline modeling of the prestressing cable, two PC beams are analysed using PRES2D software. Following data are used for the analysis purpose:

A two span beam of 30 m length and 300mm x 750mm cross section with 23 KN/m uniformly distributed load (including self– weight) and prestressing force of 938 KN has been analyzed by load balancing method with idealized parabolic profile, Lin’s method [Lin and Burns (1995)] with actual cable profile considering two parabolic segments at midspan and two reversed parabolic segments at the support and proposed B-spline model. The idealized parabolic model and realistic model is shown in Figure 5(a) & (b). Parabolic model is accounted through load balancing approach analytically and through STADD software numerically. For FE analysis using B-spline model, the beam is discretised into 20 plane stress nine noded elements making total of 123 nodes as shown in Figure 5(c). Stresses at various locations due to different approaches are given in Table 1. Negative sign indicates compressive stresses. Deflections at middle of span are given in Table 2. It can be seen that conventional parabola approach results are in close match with STAAD results while the results of Lin’s approach are in good match with B-spline approach; particularly at the supports. It can also be observed that the top fibre stresses are compressive while the bottom stresses are more compressive in case of Lin’s method when compared to conventional parabolic layout, which is also observed from B-spline results. Deflection at mid span is less in case of Lin’s cable layout as well as B-spline cable profile compared to conventional approach (Table 2). It should be noted that design based on parabolic model would be erroneous as it results in lesser tensile stresses than the actual ones. The analysis considering two parabolic segments at mid span and two reversed parabolic segments at support, is very complex. The proposed approach using B-spline model of the cable overcomes these difficulties.

A two span beam of 24 m length and cross section of 300mm x 600mm with centrally applied concentrated loads of 150 KN and prestressing force of 1200 KN is taken up for comparision (Figure 6a). The beam is analyzed using load balancing method with two parabolas, Lin’s approach using 6 parabolic segments, STAAD software and by our approach using PRES2D software. For FE analysis the beam is divided into 20 nine nodded plane stress elements making a total of 123 nodes as shown in Figure 6b. Stresses and deflections due to different approaches are given in Table 3 and Table 4. It can be observed that stresses obtained om parabolic modeling and STAAD Pro software are close because both use same formulation. Realistic cable modeling by B-spline gives stresses comparable to Lin’s approach. But stress analysis by 6 parabolic segments model is very complex as the very modeling of these parabolas istedious. Designbased on B-spline model will be more accurate. It can be observed that tensile stresses due to Lin’s approach are on higher side. Hence design based on it will be conservative. Deflections at arious sections due to different approaches come out to be approximately the same.

In this study, a novel approach to analyse prestressed concrete beams is presented. Cables are modeled as B-spline. To make it user–friendly, this approach is coded in a 2D FE software where concrete is modeled by 9 node Lagrangian and cable by 3 node curved bar elements. Using this software two representative problems are analysed and results obtained from various methods are compared. It is observed that realistic cable modeling should be carried out to obtain true stresses and deflections for design considerations. Stresses are found to be more sensitive to the cable model than the deflections.