Ready-Mixed concrete is used in the civil engineering and construction business, for example: bridge, free way, dam and buildings. In Ready-Mix Concrete plant, concrete is produced at plant and it is delivered to site. Initial setting time of concrete is 30 minutes. To prolong the setting time, plasticizers are used in Ready-Mix Concrete. Pumpability and Flowability are the major issues in Ready-Mix Concrete; hence slump is the major criteria with the strength. A transit mixer takes approximately 45 to 180 minutes to deliver concrete and return to the site depending on the distance of site from the plant and other conditions. Some concrete particles/ slurry stick to the blades of transit mixer, walls and floor of the transit mixer which is normally termed as sludge in technical terms.

Ready-Mixed concrete plant operations are large consumers of water. Sludge water is the waste wash water from concrete mixing plants and agitator trucks. Approximately 200 litres of water are used to produce one cubic meter of concrete from a central batch plant. The figure from a truck mix plant is higher, at 300 litres. In addition, approximately 500-1500 litres of water are used to wash down the plant and yard at the end of each production day, plus 100 litres to wash out each mixer - the central mixer and every truck used that day. With the growing demand for Ready-Mixed concrete, the disposal of sludge water is becoming an increasing environ- mental concern. Each working day, approximately 700–1300 litres of wash water are required for a single concrete Truck. Due to the large amount of suspended matter and high alkalinity untreated sludge water cannot be legally discharged into urban sewers. In general, the procedure for sludge water disposal utilizes two series-connected sedimentation basins. The first basin receives leftover concrete and wash water from the concrete plant and trucks. The overflow sludge water containing suspended fine particles is transferred to the second basin. After a settling period, the water from both basins is flushed to the municipal drains. Leftover concrete and sediment from the first basin and muddy sludge from the second basin are placed in a landfill.

The problem of Sludge is severe with:
As the time increases, setting are at a faster rate, slump reduces drastically and flowability reduces at a faster rate. It becomes more difficult to remove the settled/ sticked sludge formed in the transit mixer.

Production of Concrete and Sludge Formation in the Month of August

Regression Analysis: Sludge in Cu.m versus Production in Cu.m for Month of August.


The p-value in the Analysis of Variance table (0.005) is less then 0.05 hence we reject the null hypothesis, indicating that the relationship between Sludge in Cu.m and Production in Cu.m is statistically very significant at an a-level of .05. This is also shown by the p-value for the estimated coefficient of Sludge in Cu.m, which is 0.005. However the R2 value shows that Sludge in Cu.m explains 23% of the variance in Production in Cu.m, indicating that the model does not fit the data extremely well.

There are three outliners observation 7, 9 and 26 where Residual is more than the standard Residual indicating some special cause of variation.

Thus from this result, we understand that though there is correlation between the sludge produced and the Production of Ready-Mix Concrete other factors other than Production have to be considered for formation of sludge.

Analysis of Variance (ANOVA) of Sludge Production for the Month of August, September, and October 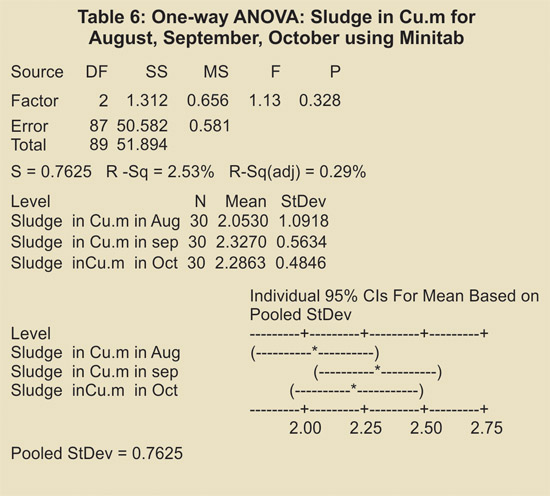 The ANOVA is based on the following assumptions:
Analysis of variance tests the null hypothesis that all the population means are equal at a significance level α:

From Minitab we find F stat= 1.33, from F-table the critical value of F for α = 0.05 with the degrees of freedom n1=2 and n2=87 is 3.1. Because 3.1 is greater than 1.33, we cannot reject the null hypothesis. We conclude that there is not a statistically significant difference between the means of formation of sludge in Cu.m in the month of August, September and October i.e there is no variation in the formation of sludge with respect to time.

Cause and Effect Diagram

A Cause and effect Diagram was created to find out the causes of the formation of Sludge after brainstorming with the Quality Manager and the Project Manager. The following causes were found to be the reasons for the formation of sludge as shown in the diagram below. Each of the causes was investigated and scope of improvement was identified. 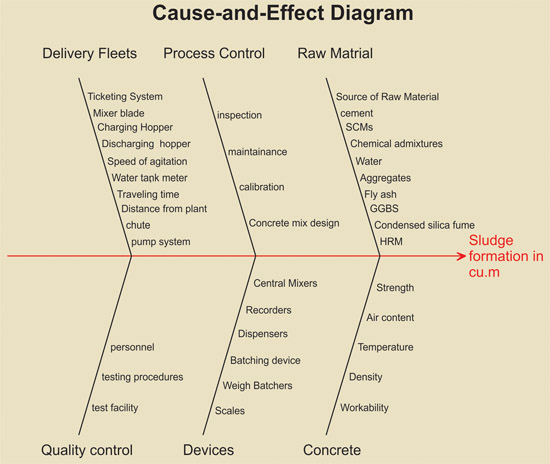